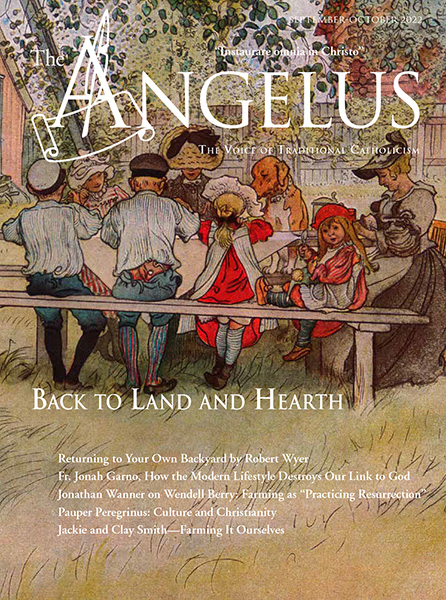 Letter from the District Superior

"In the early years of the 20th century and the decades that followed, a so-called “back-to-the-land” movement emerged on both sides of the Atlantic..."

"The modern age is one of unprecedented technological achievement. The number of revolutionary inventions in the past few decades boggles the mind. Gadgets and gizmos abound to solve every problem, to eliminate every inconvenience, and to put the world’s knowledge at our fingertips. Scarcely a day goes by without some new upgrade or improvement to our already very advanced machines..."

Returning to Your Own Backyard

"All too often, we tend to neglect what is right in front of us, imagining that the real object of greatness lies elsewhere. In fact, it may exist right beyond our door, and if so, might that not offer a beginning that suits us? If we leap in the car or board a plane to visit some spectacular sight (something one might do from time to time) but remain ignorant strangers in the place we live, doesn’t that seem a bit backward?"

Tell us a little bit about Smith and Smith Farms.

We are currently located by Meriden, Kansas, which is about 10 minutes north of Topeka on 10 acres. We offer eggs primarily, but also chicken, rabbit and soon-to-be turkey meat by special order. Additionally, we are hoping to expand with a dairy cow—first for ourselves and then added to our delivery/sales repertoire.

Will Rascals Defend Our Civilization… ?

And What Books Will They Read?

He faces execution each day. Seven days a week, his jury of peers votes unanimously for capital punishment. The judge’s hand is typically stayed. Mercy reigns because the accused shows signs of improvement. Perhaps, this little boy will one day also become fully human. With him and his kind rests the fate of Western Civilization.

Get Out: An Anti-Urban Manifesto

"Cities are a near occasion of sin..."

"To most folks at most times, dirt is a dirty word. Pigsties and sinners find in it a common stain; housewives lose by it their peace of mind; and it is the very emblem of evil’s corruption (Gen 3:19). When it is not a playpit for boys, it is a harbor of the dead. For poet Wendell Berry, however, our livelier way forward is downward..."

"If nearly two decades of studying the question of the Catholic writer (with hopes of becoming one myself) have conduced to one conclusion more than another, it is that no easy formula exists to define 'the Catholic writer.'"

The King’s Fool to His Lady

"O lady of my laughter, the feast is killed with frost..."

Strangeness of the Good: A Review of the Book by J. M. Wilson

"Many poets think of the 20th century as the era of “free verse,” which eschews traditional rhyme, meter, and verse form. Undoubtedly, great poets such as T.S. Eliot and William Carlos Williams wrote free verse; by mid-century it was the dominant style in American poetry. Polemicists in the 1960s accused traditional verse forms of being elitist, reactionary, and out of date. But formal verse never disappeared..."

The Three Ways of Praying

It was at the Chapel of the Visitation in Nice that Monsignor Lefebvre celebrated on February 17, the first Sunday of Lent, his last Solemn Mass and delivered his last homily.

My dear brothers, It is with great joy, great satisfaction that I find myself today in the midst of you in this admirable church of St. Claire, filled with so many memories. ...

We’ve Got Each Other’s Backs

"The growth of a well-formed child is like a tree, strengthened by three kinds of support: home, Church, and society (school is the preparation for society). In an ideal world, the support from each area would be equal and each would be in harmony with the other..."

"On June 29, 2022, Pope Francis issued an Apostolic Letter on liturgical formation, entitled from the Latin Vulgate text of the Last Supper Desiderio desideravi—“With desire have I desired to eat this pasch with you before I suffer” (Lk. 22:15). It is in fact a series of reflections justifying to the laity the decision to revoke the permission for the traditional Latin Mass..."

"What should Christians study? The question has exercised many great minds down the years. No one doubts, of course, that it is good to study sacred scripture, and what is called “divine science.” But how much time or energy should we give to human culture: for example, to philosophy, history, mathematics, and the various sciences of nature, to literature and the other fine arts?"

What is a rash judgment? Is it always sinful?

“That’s it! I’m finished! I’m never going there again. That priest! He started Mass twenty-five minutes late—again—and then, he preached for forty-five minutes! And those children—the noise! I’m back to the Indult/Sedevacantists/Novus Ordo—anything but that!”