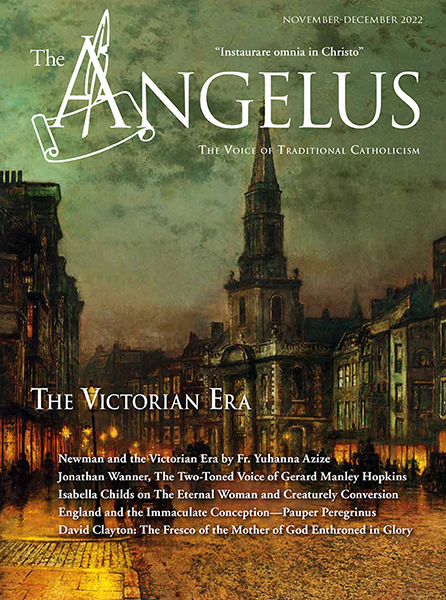 Letter from the Superior

"During the so-called Victorian Era, Pope Pius IX reinstated the Catholic hierarchy in 1850 with 13 sees and the Archdiocese of Westminster. Not since the reign of Mary Tudor in 1855 had England seen a normal Catholic ecclesiastical organization..."

Newman and the Victorian Era

"John Henry Newman was born into this world on February 21, 1801, into eternal life on August 11, 1890, and canonized on October 13, 2019. He was, in mind and spirit as well as nationality, an Englishman through and through, but a Catholic and a priest before all else. His epitaph, carefully chosen to sum up both his life and his hopes for eternity in heaven, expresses the realization that God alone is complete reality and truth, and that this world is but a shadow cast in time."

The Eternal Woman and Creaturely Conversion

"Few years have seen such monumental events as the years spanning the lifetime of twentieth-century German Catholic writer, Baroness Gertrud von le Fort, who lived from 1876 to 1971. During Von le Fort’s lifetime, Germany saw the rise of the German Empire, the fall of the German Empire, World War I and devastating defeat, the authoritarian socialist rule of Hitler, World War II and devastating defeat, and the Russian Communist rule of East Germany..."

"The poetry of Gerard Manley Hopkins is bread in the mouth. To speak it aloud is to douse your lips in the kind of butter that grows more fat-rich as your tongue churns it. It is the kind of loaf you cut with a fiddle-bow knife and eat on a stump of wood..."

"Léon Daudet (1867-1942), one of the most important figures in Charles Maurras’ (1868-1952) monarchist movement, l’Action Française, wrote a book in 1922 entitled The Stupid Nineteenth Century. Although he was himself tainted by some of the tempting flaws of the period in question, he certainly seems to me to have been correct in many of his complaints concerning the appallingly arrogant socio-political absurdities resulting from the intellectual reductionism that came to dominate the western world in the 1800s..."

The Fresco of the Mother of God Enthroned in Glory

"The Beuronese School is an interesting cul-de-sac in the Christian tradition. It is named after the town of Beuron, in Germany, which is the location of the Benedictine community in which the school originated. The style is an attempt in the 19th century to revive Christian art, and is a reaction against the dominating over-sentimental naturalism of the time..."

A Child of the Snow

"There is heard a hymn when the panes are dim..."

Review: Seven Sacraments: The Traditional vs. the New Rites

"The law of prayer determines the law of belief and in turn the law of practice. How we pray determines what we believe and how we live. This is the premise of Daniel Graham’s Lex Orandi, Comparing the Traditional and Novus Ordo Rites of the Seven Sacraments..."

The Case for Liturgical Restoration: A Review

"Reviewing a collection of studies written over years and concerning everything relating to the liturgy, from silence in the liturgy to the liturgy in contrast to the New Age Movement, is a daunting task. Fortunately the editorial work done by Joseph Shaw and the quality of the studies makes the impossible, possible. They clearly present the Tridentine Rite (Usus Antiquior) as the privileged instrument of Tradition to pass on the integral Catholic Faith."

Christ, the Only Mediator

My Path to Tradition

"I grew up in Denver, Colorado. My mother is the granddaughter of an Irish Catholic pioneer who was one of the families that helped to build the Cathedral Basilica of the Immaculate Conception. Her mother married a Protestant. My father grew up on a farm in Kinderhook, New York..."

Pius XII’s Clarifications on the Nature of the Episcopate

The following is a study by Fr. Jean-Michel Gleize, FSSPX. It was published originally on the official French District website of the Society of Saint Pius X. We thank Michael J. Miller for this translation.

England and the Immaculate Conception

"Fr. Yves Congar (1904-95), an erudite if problematic French Dominican, once remarked to an Anglican bishop at the University of Cambridge who was criticizing the dogma of the Immaculate Conception: 'But it is England’s great gift to the Catholica [Catholic world]!' What did he mean?"

"St. John does not give us Our Lord’s last “testament”—the new and eternal in His Blood—but he certainly does give us His “last wishes”: those things we see Jesus repeating, and so insisting upon..."

Reading recommendations from the Victorian Era.

What does the first precept of the Church command? What is the traditional discipline regarding work on Sundays?