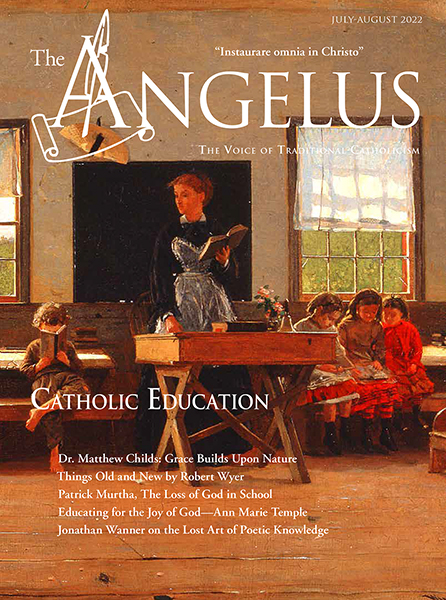 "Nearly a century ago, in his encyclical Divini Illius Magistri, Pope Pius XI wrote: “In fact it must never be forgotten that the subject of Christian education is man whole and entire, soul united to body in unity of nature, with all his faculties natural and supernatural, such as right reason and revelation show him to be[.]” How far we have moved from this ideal in the contemporary world..."

Grace Builds Upon Nature: The Case for Catholic Liberal Arts

"The principle that grace builds upon nature has perhaps become an axiom so familiar that we have lost the sense of its urgent implications for education. When we speak to new teachers about our profession, we often make reference to the parable of the sower and the seed because our essential job as teachers is to do what we can to prepare the soil of our students’ intellects so they can fully receive the seed of truth and bear intellectual and spiritual fruit..."

Things Old and New: Some Considerations on Parish Schools

"Most of us could probably readily agree on what we are against in education, but consensus on what we are for is another matter. Few disagreements are more acrimonious than this one; it is something akin to a family fight or a lovers’ quarrel..."

"The public school system has received no shortage of flack over the past years. And it would be foolish to say that the cause was not just: lewd, sexually explicit, and even blasphemous literature, obscene sex education, the covert propaganda of transgenderism, school boards shutting out parents..."

Dante’s Divine Comedy: Educating for the Joy of God

"In the following pages, I would like to offer the words of the poet as illustrations of the teaching principles of St. Thomas. I have chosen the verses and scenes which most struck me in the classroom and in my own reading as embodiments of St. Thomas’ vivifying ideas. I hope this taste will encourage other Catholic educators to open the Divine Comedy and drink for themselves with confidence at the source..."

"When I arrived as a first-year student at St. Mary’s College, I was surprised to find that—like myself—many of my classmates hadn’t originally wanted to come to St. Mary’s. They were persuaded by parents, mentors, religious or friends to make a decision which, to an ambitious teenager, seemed pointless: working hard for two years at an unconventional liberal arts college which wasn’t even fully accredited. In hindsight, I see that this decision was a mark of freedom..."

"When students dip their toes into a poem, they usually wade their way through its figurative language until they wash up to some shore of meaning. The problem is the students’ eyes: they believe they’ve discovered a new continent when, in reality, they’ve hit a sandbar. The irony is that the poem’s meaning is not even on land: it is in a New Atlantis fathoms below, and you must drown a little to see it..."

The Corruption of Art Education in the Modern Era

"The Church has always seen the need of art for the communication and sustenance of the Faith. The Seventh Ecumenical Council, which closed in 787 A.D., did not simply permit the use of images—rather, it mandated the veneration of images of Christ, Our Lady, and the Saints as an essential aspect of devotional prayer and worship of the prototypes that the images depict..."

The Origins of Education in America

"America has always been seen as a land of opportunity; a land that allowed a new way of life and a freedom from the institutions and restrictions of England and Europe. This is proven by the fact that Harvard, the first American college, founded in 1636, granted its first degree in 1642 without receiving authority of any kind..."

God and Modern War: A Review of Phil Klay’s Missionaries

"Phil Klay’s recent novel Missionaries is very different from Brideshead—fast-paced and thrilling where Waugh’s novel is meditative. Klay writes about war, and his work is sometimes gruesomely violent, as befits its subject matter. Nevertheless, Klay is one of the best Catholic writers since Waugh’s death..."

"What do we think of when we hear “divine providence”? Most likely, we think of, well, God providing, especially in the context of our earthly lives. And, indeed, this is a part of divine providence. Christ Himself tells us this..."

The Restoration of Catholic Civilization in SSPX Schools

An interview with Fr. Beck, superintendent of schools for the U.S. District of the Society of St. Pius X.

How to Get a Solid Catholic Formation … in Paris!

An interview with Fr. François-Marie Chautard, Rector of the Institut Universitaire Saint-Pie X in Paris.

The Priest and Catholic Education

"Catholic education is a work of the Catholic priesthood. In the order established by God, priests are not only the instruments of Jesus Christ in administering the sacraments, but also in imparting knowledge of the truth to all Catholics. They have a special duty to watch over the formation of the young. Deliberate separation of the intellectual and moral formation of children and adolescents from the influence of the priests of Jesus Christ can severely handicap or even entirely vitiate that formation..."

"It was not unknown at our school that, when I was within earshot, a boy would try to get a reaction. 'This school sucks,' he would say, or 'we’re living in a prison' and sometimes, strangely, 'smartphones are the devil...'"