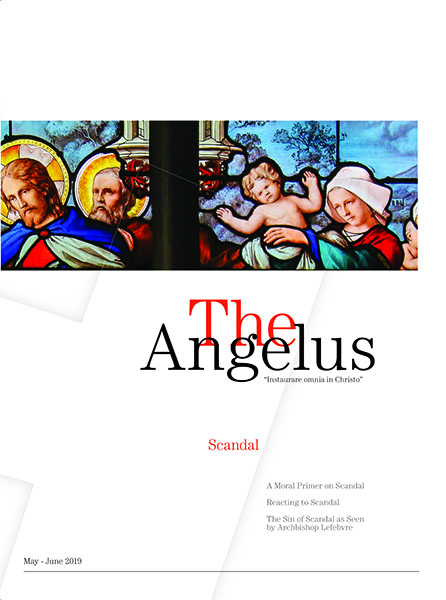 Why are there scandals in the Church?

A Moral Primer on Scandals

How are we to understand and endure scandals in the Church?

Reacting to Scandal: Dante and the Popes

An analysis of how Dante confronted the problem of scandals in his Divine Comedy.

Leprosy in the Church of God

On the assault of scandal and evil against Christ's Church.

The Subject of Priestly Scandal

The Sin of Scandal Committed by Priests

Archbishop Lefebvre's thoughts on priestly scandal and what to do about it.

The Holy Sacrifice of the Mass: The Epistle

On the role and liturgical importance of the Epistle in the Holy Sacrifice of the Mass.

Darkness or Light from Christ?

Who is the "obscurantist one"?

The 75th Anniversary of D-Day: Why Do You Come Back to Normandy?

A reflection on returning to Normandy 75 years after the famous invasion during World War II.

A discussion of the nature and marvels of the Basilica of St. Thérèse.

Dealing with Clerical Scandal: It Takes a Christendom

A discussion of "clerifical mischief" in the Church.

Protecting the Property of Others

Why should we be concerned with protecting other people's property?

Some thoughts from Hugh of St. Victor applicable today.

Eve: A “Saint” for Our Times

A mediation on Eve and what she can tell us about our current conditions.

A review of yet another attempt to justify the controversial teachings of the Second Vatican Council.

On the cultural revolution.

Scandals are a lesson in humility.