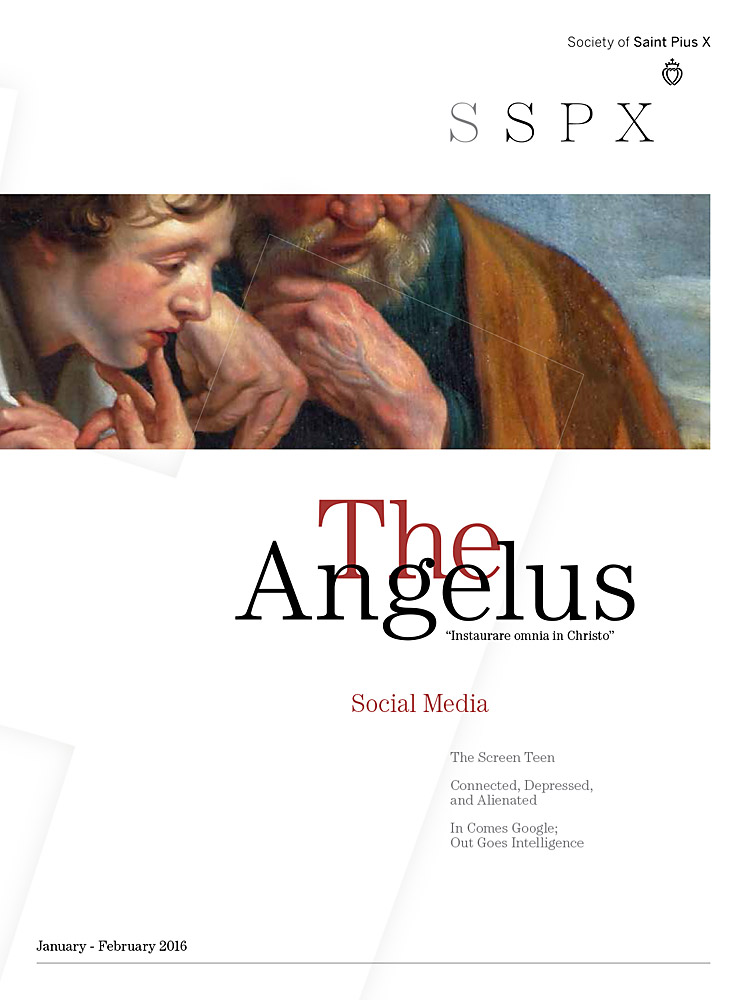 This issue of The Angelus is intended to acknowledge the existence of a new and invasive lifestyle, to appreciate its advantages, and acknowledge its pitfalls.

All technology brings with it new and marvelous possibilities in which we are allowed to partake. But an honest analysis will allow us to draw the line between the admirable, the useful, and the harmful.

Youth on the Internet

Should we be concerned about the social consequences of the Internet?

The Virtue of Prudence

by Dr. Peter Chojnowski It was as a young boy come down with a fever stemming from a prior stomach ailment that St. Augustine remembers, in his Confessions , an incident which revealed to him...

In Comes Google, Out Goes the Mind

Does the internet affect the way we think?

From Pope Pius XII to the present day; Rome speaks about the dangers of modern media.

The History of Lent

The season of Lent in the Liturgy

“Whereas the kingship of man asserts itself obstinately as a dogma of modern society, let us affirm more than ever the kingship of Christ, His right to be honored, served and obeyed.”

The Role of Parents in Confession

The Tradition of Slowness

Words from the liturgy can sanctify and illuminate the ready mind; a good musical setting draws the mind upward and makes the splendors of their meaning all the more evident.

I am Proud of You

Why it is important to encourage and congratulate your children

Interview with Fr. Fortin about the SSPX apostolate in the Philippines

Vatican II and the Jewish Question

For the first time a Council decree looks positively on the non-Christian religions and calls for dialogue in order to convert the false images Catholics have about other religions.