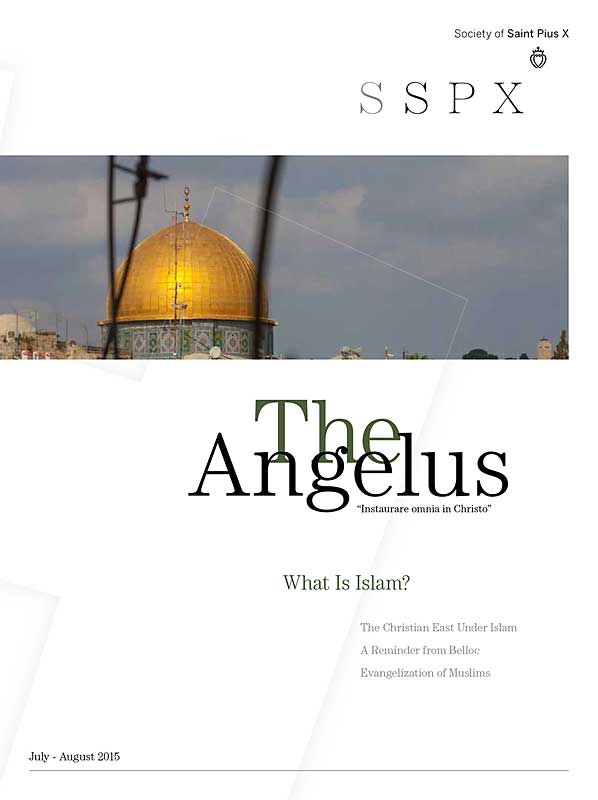 The first duty of fervent Catholics is to know about this rising enemy, which is the purpose of this publication, and oppose to it the charity of truth and the true charity.

A brief introduction to the nature of Islam and its internal differences.

The Christian East Under Islam

[Catholics] would do well to remember the  . . . tragic experience of their Eastern brethren and their heroic attempts to keep the Light of Christ shining in the lands where the Apostles themselves first began to spread the Gospel.

Islam presents a totally different problem from that attached to any other religious body opposed to Catholicism. To understand it we must appreciate its origin, character and recent fate.

The Evangelization of Europe

[M]issionary activity must make known the social doctrine of the Church without cutting it off from its foundation, which is the doctrine of Christ the King.

Insights into the Quran

At the heart of the Islamic religion is the Quran, which translates “recitation.” For the Muslim, the Quran is the Book of Allah himself and this is why each verse starts with: “Allah said…”

Catholics in the Middle East

There are twelve Rites in the Catholic Church, organized into three liturgical families. The most widely known are the Roman Rite and the Byzantine Rite, but that leaves ten more, and the Catholics of the Middle East belong to at least seven of these.

I respond point by point

A refutation of modernism from a letter written by Pope St. Pius X.

The only thing that can oppose [Islam] is the natural and Divine law, denied radically by both relativism and Islam

The Light of Faith

How to Speak to Muslims

Interview with Joseph Fadelle, a Muslim convert and author, on his conversion to Catholicism.

The Hermit of the Sahara on Muslims

The work of Fr. Charles de Foucauld, hermit of Western Algeria, for the conversion of Muslims.

La Sainte-Chapelle and the Crusades

Story of the chapel built by King, St. Louis IX of France to house relics of the Passion, and his attempts to regain Jerusalem from the Muslims.

How does one awaken in children the desire to read?

The Sacrifices of Motherhood

This human practice of love is shown by your daily surrender . . . . Your consolation is a joyful heart and the peace of knowing that you are doing all you can to sanctify your own soul and get your family to heaven.

Interview with Fr. Ferrelli, SSPX, about his assignments to Argentina and Chile.

The relevance today of Archbishop Lefebvre's Declaration of 1974.

Letter from an Arab-Christian living in Syria.

The mysterious book of the Apocalypse.