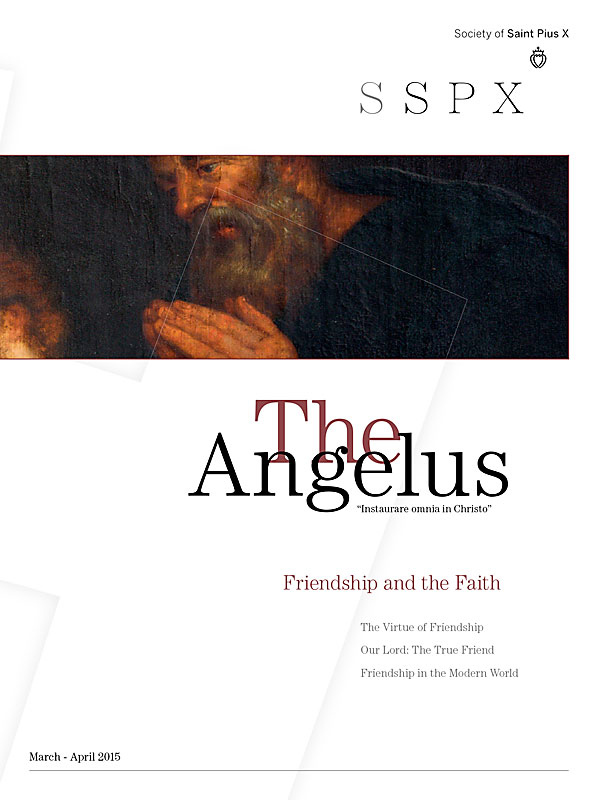 If love is the very reason for friendship, then making friends is an essential component of human life, and their choice, good or bad, will define us since “a man is known by the company he keeps.”

The Virtue of Friendship

It is written (JN. XV, 15): I will not now call you servants…but My friends. Now this is said to them by reason of nothing else than charity. Therefore, charity is friendship.

Friendship in the Modern World

. . . while the ubiquity of social networking may seem to indicate that friendship is flourish­ing, I think a careful look at the question will demonstrate otherwise.

Friendship--Good for Mind, Body, and Soul

Friendship is an endangered species in the human landscape; lest it disappear entirely, it would be a benefit to individuals and their communities to learn how to re-establish full, intimate friendships.

There are two ways to move the will of another towards one’s own: fear and love. And Our Lord Jesus Christ came onto this earth to “draw all things to Himself” (Jn. 12:32), to incline our rebellious wills to say to our Father, “Thy Will be done on earth as it is in heaven.”

Friendship with God, the foundation of the Communion of Saints and thus the basis of friendship among those who share the life of charity, finds one of its principal expressions in the Sacred Liturgy by way of the conferral of the peace of Christ . . . and this is shown most resplendently through the ceremony called “the Pax.”

The Birth of The Angelus

An interview with Irene Slovak about the humble beginnings of one aspect of the life of Tradition in the United States: Angelus Press and its magazine, The Angelus.

In human terms, friendship and love are al­ways associated with beauty. But the problem is to determine what true beauty consists of and to apply it to the unchanging spiritual beauty. Only having answered satisfactorily these preliminary questions shall we be in a position to explain what is conjugal friendship.

The Sacrifice of Praise

The sacrifice of praise . . .  is something much more than the offering of perishable words, spoken or sung. The thing signified is nothing short of the whole self and everything that one has.

The Sack of Rome

Filial piety is a virtue that comes under the general heading of justice. It is just to honor our parents for all they have given us. “Our parents are our greatest benefactors.

Is courtship always associated with marriage? What are its goals and dangers?

Friendship and True Love in Adolescence--Christian Attitudes and Choices

[A]mong friendships, the most crucial one is that of marriage. It is “the great affair.” But marriage, elevated by a sacrament, concludes in charity.

A Russian Orthodox priest writes in response to an article which appeared in the July-August issue of The Angelus, Gabriel S. Sanchez’s “No Light from the Orthodox East on Christian Marriage.”