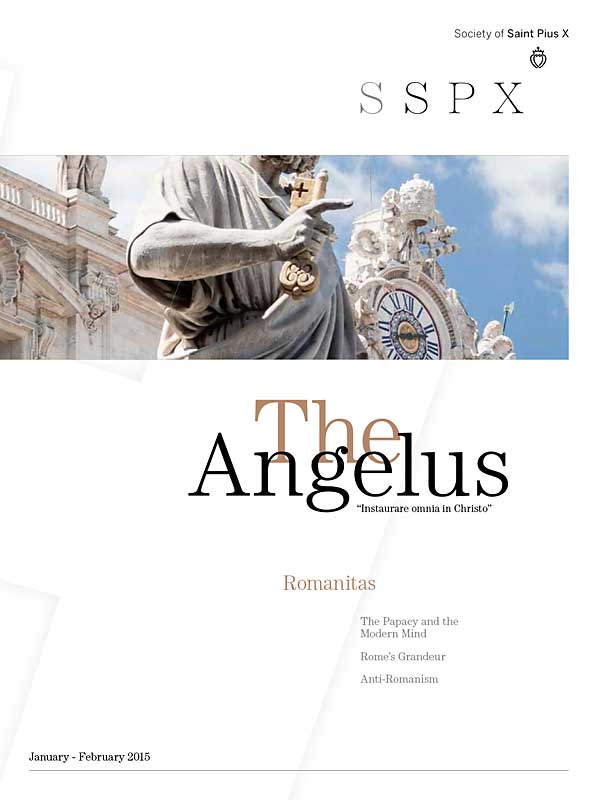 One cannot be Catholic without being Roman.

To one man alone may the term “vicar of Christ” be most properly applied since to him alone were given “the keys to the kingdom of heaven.”

The one, holy, catholic, and apostolic Church is the Roman Church. Yet the quality of being Roman is something more than and different from a mark of the Church . . .

[The] broad array of revolutionary forces, from the Renaissance to “Catholic” liberalism and to democratic radicalism, found their catalyst in the myth of a Rome “regenerated” and “reformed” because freed of the civil power of the Roman Pontiff.

Interview with some pilgrims who discovered the Eternal City for the first time...

The Choice of Rome

I believe I must add some words to draw the attention of our priests and our seminarians to the indisputable fact of the Roman influences on our spirituality, on our liturgy, and even on our theology (Archbishop Lefebvre)

The Papal Profession of Faith

History and explanation of the papal profession of faith.

This defense of St. Pius V by Father Roger-Thomas Calmel, O.P., remains relevant because he analyzed the present crisis in light of eternal principles.

The Bones of St. Peter

With the discovery of the tomb and bones of St. Peter, the historical tradition of the coming of St. Peter to Rome, his sojourn in the Eternal City as its bishop, and his martyrdom and burial, receives a scientific and irrefutable confirmation.

Book Review: The Golden Door/Mary in Our Life

By Fr. Dominique Bourmaud, SSPX The Golden Door By Katherine Burton “The Navajo in his Hogan, the Negro in his cabin, the white man, poverty-stricken or wealthy, all were entitled...

A short study of the Roman presecution of the early Catholics; a departure from the usually tolerant policy of the Roman government towards foreign forms of worship.

Who Wants to Set the Table?

In a family, the children are not like guests at a hotel where everything is served them. It is essential that they share in the family chores, and the first one that comes to mind because it is a simple, daily activity is setting the table.

The SSPX apostolate in Central America.

Romanitas in time of crisis. We are Catholics, and thus Roman. But how ought we to be Roman today?