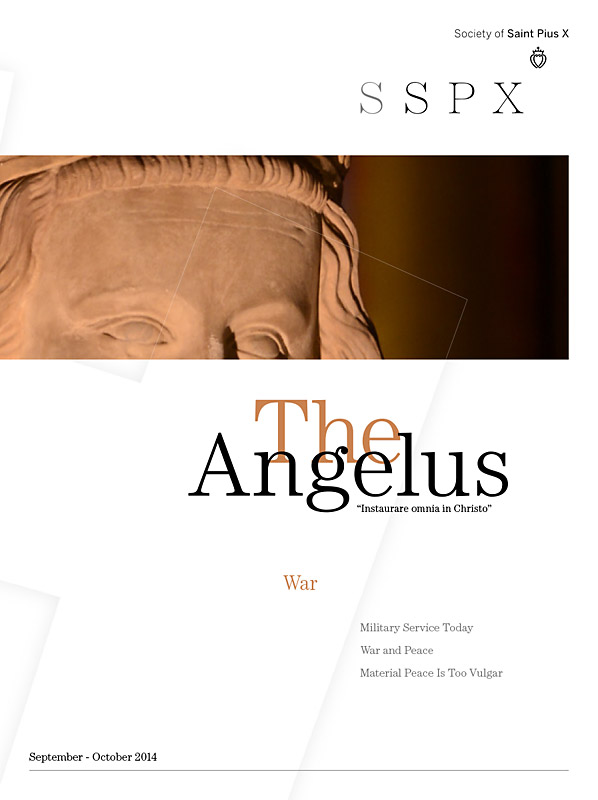 It is expedient to Catholics to have the proper understanding of the moral principles behind war and the good examples of Christian men who served their country and God, since

The Will of the Offensive: Tactics and Casualties in World War I

During the more than five years from August 1914 to November 1918, over 37,000,000 individuals suffered as casualties of World War I according to the official war records of the major powers. . . .

Is service in the U.S. military still an acceptable choice for Catholics?

The history of mankind is an endless alternation of peace and war. But ultimately, what is war? And what is the essence of peace?

Material Peace Is Too Vulgar

Is the Church in the 21st century in a position to promote peace despite the growing hostility directed toward her?

“God will provide!” These words were the reply of a trembling father to his son asking who will take care of the victim for the sacrifice.

The arts reveal the standards of an age.

A Lonely Voice for Peace

The 1942 Christmas Message. A New York Times editorial called Pius XII a “lonely voice crying out of the silence of a continent.”

Though the liberalism—political, economic, and religious—which the great Popes of yesteryear warned the world against now reigns triumphant, that does not relieve Catholics of the duty to strive for right order.

Louis IX: Born to be a Warrior King.

The disciple “whom Jesus loved” wants . . to make manifest to us . . . the One he had the great grace of knowing and loving, that we too might have part in this grace.

Book Review: To Build the City of God

Book Review by Fr. Bourmaud of To Build the City of God by Brian McCall

Charlemagne and the Long Frankish Pilgrimage to the Just War

The development of the concept of the just war and warrior.

Fr. McMahon explains the reason for the importance given to sports and games at La Salette Boys Academy.

Trust in Divine Providence and peace of soul.

Is the “Catholic” marriage of an insincere convert from paganism valid?
Does a priest commit sacrilege if he rushes through the celebration of Mass?

The Future of Offensive War

This article of Cardinal Ottaviani deals with the morality of today’s wars, and specifically of offensive war.

Modern “smart” weapons and “push-button warfare” threaten to end all restraint in the conduct of war by shielding one side from the realities of the horror of war. . . . and raise serious questions about the nature of modern warfare.

Dear Angelus Press,  I am worried that the Society has been getting soft on issues on which it used to speak its mind more forcefully.

WWI is framed by two saints who offered themselves in holocaust to prevent or shorten it and to finally bring it to an end. In both cases, the Divine Judge accepted their offering.