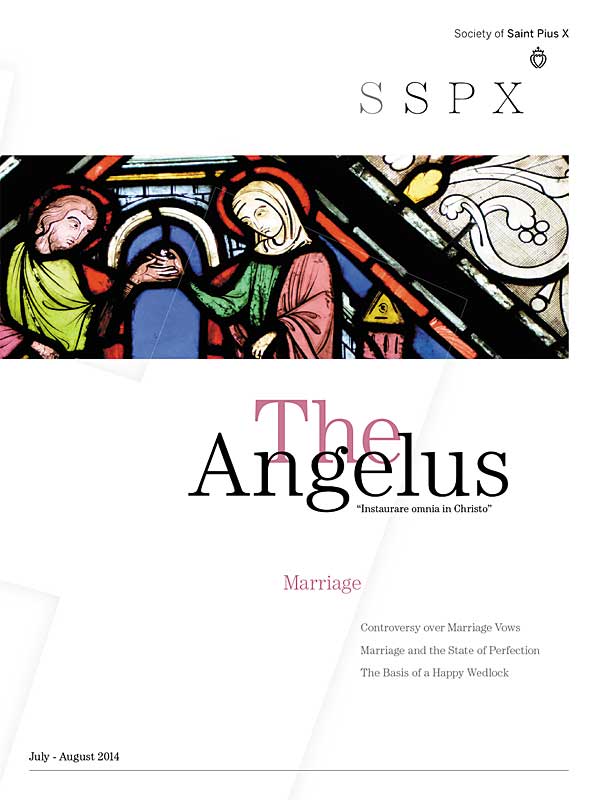 What is at stake is nothing less than the sanctity of Catholic marriage since the problem, practically speaking, is whether or not to allow remarried divorcees to receive Holy Communion.

Marriage and the State of Perfection

In offering these extracts to our readers, our intention is to address the often asked question of the priority between virginity and marriage.

Rites of Matrimony--Past and Present

More than any other sacrament, the liturgical ceremonies of matrimony are nuanced by long-standing social customs native to the various nations where the light of the Catholic Faith has penetrated.

Christian Marriage, Guarantee of the Dignity of the Woman

By proposing to women the model of the Blessed Virgin Mary, whom God himself chose to be the mother of Our Lord Jesus Christ, the Church proves the esteem in which she holds womankind.

Law and Marriage Go Together

Can and should state law prohibit or permit the “marriage” of two people of the same sex? Are such laws consistent with the Constitution of the nation?

The Basis of a Happy Wedlock

“Take care not to spare your efforts and authority in bringing about that among the people committed to your guidance that doctrine may be preserved whole and unadulterated which Christ the Lord and the apostles, the interpreters of the divine will, have handed down, and which the Catholic Church herself has religiously preserved, and commanded to be observed by the faithful of every age.”

Male and Female He Created Them

A Pastors Perspective: How to Have a Happy Marriage

This interview was given to SSPX priests who have had extensive experience in preparing couples for their wedding and working out their differences during marriage.

The transformation of all things in Christ was Pope Innocent III's primary concern, and he underlined this theme in writing with reference to marriage.

No Light from the Orthodox East on Christian Marriage

With respect to certain moral matters, specifically marriage and the family, there is, lamentably, no light coming from the Orthodox East.

The necessity of receiving the sacarament of confirmation before marriage.

The Synod on the Family has been in the news now for months. But is this the first Synod of the kind? Or has there been some history behind it?

On the Ecumenical Meeting between Pope Francis and the Patriarch Bartholomew

What God Has Joined

Dear Angelus Press,  Thank you for this past issue of The Angelus focusing on Pope St. Pius X who was famous for warning us that “Modernism is the synthesis of all heresies.”...

Dear Readers, In a sermon now famous, in 1979 Archbishop Lefebvre launched a crusade of fathers of families in order to restore all things in Christ. (You’ll find the sermon in Apologia...