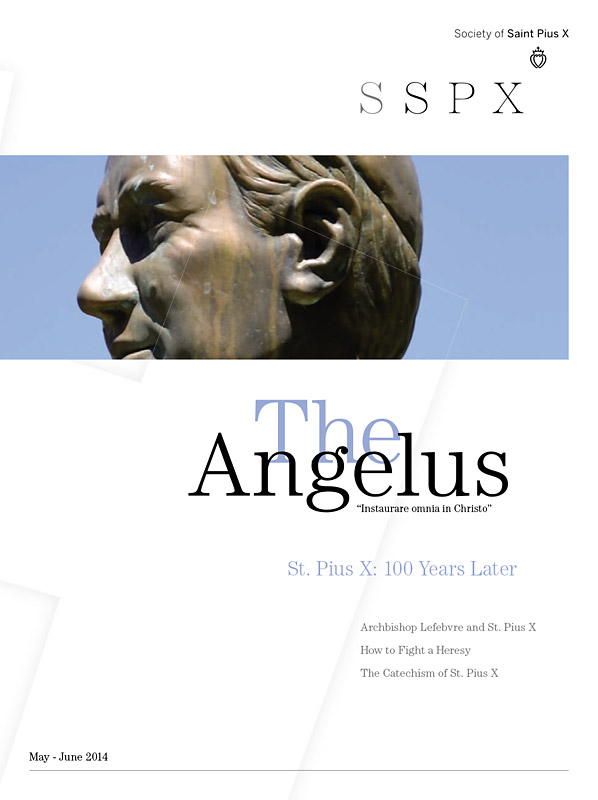 The founder of the Priestly Society of Saint Pius X surely had reasons for placing the work of safeguarding the Catholic priesthood under the patronage of Pope Pius X.

“There will be saints from among those children”

Pilgrim Steps to the Venetian Pope

“After having been 59 years a bird in the bush, I do not feel like turning into a bird in a cage.” These words of Cardinal Sarto, then on the brink of being sent to the Roman Curia, reveal his profound attachment to his peasant native land.

The St. Pius X Catechism for the 21st Century

It is the desire of the District Office, as we are working to implement unity and coherence in our religion curriculum, to adopt this text in all SSPX schools. If all goes well, it will be available from Angelus Press next year.

The Just Man Lives by Faith

In a pastoral letter addressed to his clergy, Monsignor Sarto sketched in these terms the physiognomy of the priest as he conceived of him: “A priest should be holy; he should therefore be grave, such that his words, his deportment and his manner of acting draw to him people’s affection, conciliate the public authorities, and earn him respect. . . .

The day after the Pope’s death the praise for him was unanimous.

"We offer heartfelt thanks, then, to God in His goodness for allowing Us to take part in this extraordinary event; all the more so since, for perhaps the first time in the history of the Church, the formal canonization of a Pope is proclaimed by one who had the privilege of serving him in the Roman Curia."

How to Fight a Heresy

Two ideas stand out as we examine St. Pius X at grips with modernism: first, that he was manifestly the Man of God, the one who was called by Providence to the capital role of flooring the new hydra; then, that, when all is said and done, he was understood by the most honest and most intelligent non-Catholics

Book Review: Saint Pius X: Restorer of the Church by Yves Chiron By Fr. Dominique Bourmaud Here is a valuable book, with precious inserts from Italian and the Vatican Secret Archives,...

Several objections are given to singing by the congregation of such liturgical texts. The first and most convincing is quite simply that in some places in the English-speaking world it simply is not the custom . . .

“He who sings praises, not only praises, but praises joyfully.”

Thinking It Over--Relaxing with a Good Movie

Watching a movie for relaxation is a pleasant pastime, but is it always morally permissible?

On Modernism Past and Present

The characteristic, specifying note of the modernist is hypocrisy. The modernist, it can never be sufficiently borne in mind, is an apostate who is also a traitor.

In the March/April issue of The Angelus, there was a depiction of Our Lord’s Baptism. Was this appropriate for a Catholic magazine?

“Christ suffered for us, leaving you an example that you should follow his steps”