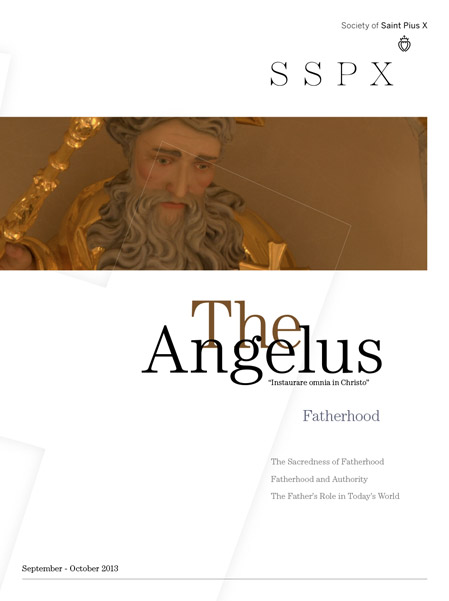 There is no other way to be a good father of a family than to imitate God, to become little by little, by efforts of virtues, to His likeness.

The Sacredness of Fatherhood

Many adults have said that the most striking childhood offense they can recollect was when they talked back or even raised their hand against one of their parents.

Contemporary fatherhood is in a sorry state. Dad, as an active presence in family and the public life, has been disappearing since the birth of our country.

The Fathers Role in Todays World

An interview with a traditional Catholic father

Having considered how God is in Himself, it remains for us to consider how He is known by creatures.

Guiding Principles of the Lay Apostolate

If all you know of the life of St. Maximilian Kolbe is the martyrdom he suffered at the hands of the Nazis at Auschwitz, you know only a part of this saint’s amazing story.

Pray not for the removal of suffering, but ask for the grace to respond to the call of God and embrace suffering wholeheartedly. Never is love for God purer than in suffering.

A Visit to the Catacombs

Living here in Rome, I told myself that I would finally venture out along the Appian Way, beyond the city gates, and visit the tombs of the martyrs.

On the Education of Young Men

The following words and thoughts are meant to provide men, especially fathers, the opportunity to “get far enough away” to re-examine some basic principles and ideas concerning their elevated roles and responsibilities.

Looking Back on Your Fatherhood

In the year 2033, you will most certainly ponder, as all men eventually do, the last twenty years and how you raised your children.

The debate between two subtle minds turns around the moot question of the compatibility between religious liberty as taught by Dignitatis Humanae of Vatican II and the pre-conciliar teaching, particularly Quanta Cura and Mirari Vos.

The true or false concept of Tradition is, in a certain sense, the crux of all the problems, all the errors, and all the problematic passages of the Second Vatican Council, and John Paul II understood this very well when he said, in the famous motu proprio Ecclesia Dei Adflicta1 of 1988 “excommunicating” the four bishops consecrated by Archbishop Lefebvre, that at the root of that act there was an incomplete and contradictory notion of Tradition which does not take into proper account its “living character.”

The main prayer of Christianity is taught by the Son of God himself. In its opening words, this prayer directly addresses “Our Father,” two words charged with emotion. These words touch every man’s center of existence and appeal to the most hidden corners of his heart.