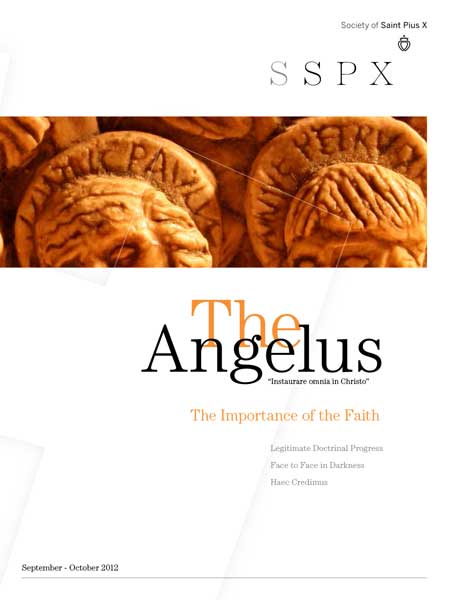 Without the Faith there is no God, no holiness, no hope. With Faith comes everything: truth, holiness, hope. What else could we preach?

Legitimate Doctrinal Progress in the Churgh

The development of dogma was a hotly debated question at the time of the modernist heresy, and it allowed the Church to draw the precise laws of growth of doctrine.

Face to Face in Darkness

St. Paul was a man of action, and thus he was often quite blunt in his expressions. When, therefore, discussing the necessity of Faith he is most succinct and to the point: “Without Faith it is impossible to please God.”

“The raucous shouting of those who through disagreement rise up against one another, the incomprehensible chatter, the confused din of uninterrupted clamouring, has now filled almost the whole of the Church, falsifying through excess or failure the right doctrine of the faith...”

During the interview published at DICI on July 16, Bishop Bernard Fellay stated that this document was “the occasion to specify the (SSPX’s) road map insisting upon the conservation of the Society’s identity, the only efficacious means to help the Church to restore Christendom.”

In our knowledge of what God is not, there remains one last thing to deny of Him: multiplicity. St. Thomas gives three proofs of the unity of God.

An Original School of Spirituality: The Devotio Moderna

It is not easy to trace the growth and varieties of the delicate topic called “Spirituality.” This is both a science and an art which deals with all things akin to the spiritual life. It aims at that Christian perfection which Our Lord but formally commanded to each of us: “Be perfect as your heavenly Father is perfect.”

“The rise of the modern nation-state is marked by the triumph of the universal over the local in the sovereign state’s usurpation of power from the Church, the nobility, clans, guilds and towns...."

St. Pius X, Our Guide Through the Crisis

This pope clearly condemned the heresy that is now ravaging the Church; he identified it and acted against it so strongly that the heretics did not dare to teach openly for 50 years.

The Spirit of Poverty

What is poverty? It is man moved to godliness, the spirit which views dust as dust and longs for heavenly riches, eternal and incorruptible.

The Orphan Trains of New York's Sisters of Charity

The Orphan Trains ran for 75 years, from 1854 to 1929, and were the well-intentioned effort of several institutions to address the staggering number of orphaned and abandoned children on the streets of New York City.

Mother of a Priest

The joys of the priest’s mother are immense: To attend the Holy Sacrifice celebrated by her own child and to receive Holy Communion from his hands....Yes, indeed, mothers of priests are some of the happiest amongst all mothers.

The family meal is an opportunity to teach your children history, social anthropology, family life, and culture.

Are there such things as purely penal laws?

Christ’s mission consists in teaching with authority in the name of God these same truths, and since the apostles and their successors were established by Christ as those who exercise in His name the mission that He himself received from God the Father,...

During the initial decades following Vatican II, the Catholic hierarchy in Western countries exhibited what can only be called a foolhardy optimism....