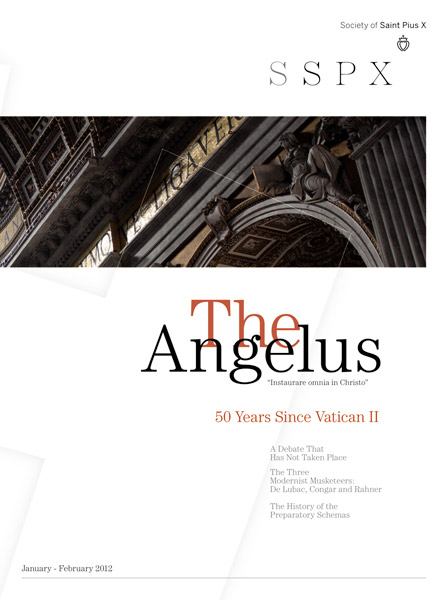 Welcome to the new and updated version of The Angelus....

Vatican II: A Debate That Has Not Taken Place

Msgr. Brunero Gherardini does not content himself with deploring the fact that the debate on the Second Vatican Council has not taken place, but even goes so far as to show why it would be more indispensable than ever today.

It is impossible to speak of the genesis of the Second Vatican Council without mentioning the leading figures of the whole movement: Henri de Lubac, Yves Congar, and Karl Rahner.

The Second Vatican Council: A History Never Written is...a monument that is obviously the result of an immense labor and destined to take a place beside the few other irreplaceable books on the Council like The Rhine Flows into the Tiber by Fr. Ralph Wiltgen and The History of Vatican II by Giuseppe Alberigo

The History of the Preparatory Schemas

For over two years, Cardinals and religious superiors met to produce what was meant to be the blueprint of the Council texts. We wish to examine this history...as to the content, the conflict, and finally the dismissal of these pre-conciliar texts.

Mary, Mediatrix of All Graces

What is meant by the mediation of Mary?

The Primacy of the Liturgy

An Introduction to Catholic Social Doctrine

Christ’s Kingship over the universe does not refer merely to the end times...

Acts of the Magisterium: On the Constitution of the Church

A Schema from the First Vatican Council...

BOOK REVIEW: The Rhine Flows into the Tiber

by Ralph Wiltgen When it comes to Vatican II, we need not indulge in the mystifying ‘spirit’ of the Council, nor even thumb through Sheed’s Is It the Same Church? To get the...

Highlights from the life of St. Francis and how it was that a simple bishop of Geneva, who is still read and loved 400 years later, was named patron of journalists.

Selections from "Introduction to the Devout Life"

Be sure that wheresoever our lot is cast we may and must aim at the perfect life.

We Must Have Christian Hope

Selections from a Sermon of Archbishop Lefebvre  about families and schools.

BOOK REVIEW: The True and Only Wealth of Nations

This book gives a series of essays of Louis de Bonald, illustrious member of the landed nobility of central France, both writer and statesman. He forcefully defended the Christian social order during the post-revolutionary years and the Bourbon Restoration.

Are human-animal hybrids a possibility?

What is the origin of the expression “Mysterium fidei” found in the consecration of the Precious Blood at the traditional Mass?

Reflections on the Presence of Atheists in Assisi

Egypt: Cardinal Naguib Denounces the Rise of the Islamists

SiSiNoNo: Dignitatis Humanae and the Hermeneutic of Reform

An old Roman proverb from Cicero is variatio delectat : there’s nothing like change! For the first time, the Districts of the United States and Canada are creating a single team. Both sides...