The Distributism of Belloc and Chesterton 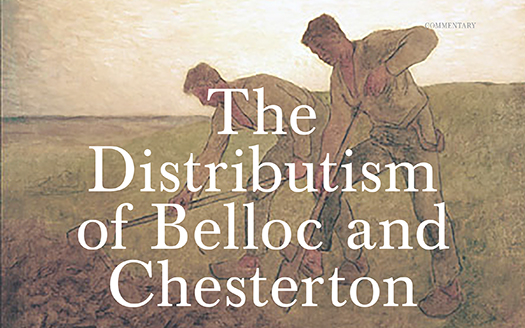 The atmospheric ugliness that surrounds our scientific war,” said G. K. Chesterton, “is an emanation from that evil panic which is at the heart of it.” And that panic induced by a fear of the past. Governments were designing bigger, deadlier guns because it was the guns that did the killing.

It takes a brave man to carry a gun into battle, of course. But the generals knew full well that it wasn’t the caliber of men that won wars: it was the size of the guns. So came the automated slaughter, the mustard gas, the napalm, the atom bomb.

What drove Chesterton mad was the fact that we call this “progress.” Today, a drone may blow up a school in Syria if NATO thinks there are terrorists hiding inside. The drone is operated by a soldier in an aircraft carrier hundreds of miles away. One push of a button, and the deed is done. The dead children are just black specks on a screen.

All the while, we take pride in how far we’ve come from the crusaders, who marched from France to Jerusalem to defend the Holy Land from Muslim invaders. Most would die along the way. Those who made it to their destination fought hand-to-hand with sword and lance in the hot sun. They didn’t have pensions or benefits. They didn’t have their student loans forgiven; most couldn’t even read. There was no life insurance, though most of them would never see home again. They fought because Deus vult. God wills it.

“The brain breaks down under the unbearable virtue of mankind,” said Chesterton:

There have been so many flaming faiths that we cannot hold; so many harsh heroisms that we cannot imitate; so many great efforts of monumental building or of military glory which seem to us at once sublime and pathetic. The future is a refuge from the fierce competition of our forefathers. The older generation, not the younger, is knocking at our door. 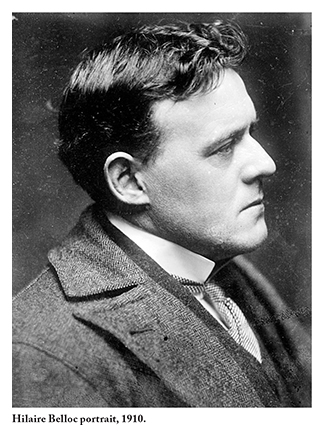 Chesterton was writing in 1910, four years before the advent of World War I. As with Isaiah, Chesterton’s beautiful rant turned out to be a prophecy.

But often enough a prophecy is just a pattern. It’s a matter of cause and effect. “But your iniquities have separated between you and your God,” Isaiah warned the Israelites, “and your sins have hid his face from you, that he will not hear.” In other words, your actions have consequences. You reap what you sow.

What was true for ancient Israel would also be true for Victorian England. Because the West had given itself over to the Industrial Revolution, of course its warfare must be industrial warfare.

Put it this way. Back home, all the workers—the farmers, craftsmen, and laborers—had been replaced with laborers. Men no longer made things. Machines made things, and men were only there to assist the machines. So, too, in battle. They weren’t warriors, like the old crusaders, but soldiers. Now the guns did the killing; the soldiers were only there to be killed.

Those who know Chesterton’s work will know that all of these insights are part of his philosophy, known as distributism.

As you might have guessed, distributism is anti-industrialism. Things that can be done by men shouldn’t be outsourced to machines. To be clear, though, it isn’t anti-industry. Men need machines to build planes, for instance, so the distributist doesn’t mind if planes are made in factories (unless, like me, he’s afraid of flying).

Politics is yet another. The Enlightenment brought with it brand new theories on how to build more rational governments based on scientific principles. The result was the most powerful machine ever created: the administrative state. This new state controls everything, from taxes and trade to healthcare and even education. As the Prince of Paradox observed, “The State did not own men so entirely, even when it could send them to the stake, as it sometimes does now where it can send them to elementary school.”

Distributists generally admire the medieval model of statecraft: governments so small and weak as to be virtually non-existent. Chesterton liked to say that the tyrant of the Middle Ages “hanged and burned in quite a small way.”

Yet distributists recognize that a mechanized government is impossible without a mechanized economy. In his book The Servile State, Hilaire Belloc—another leading distributist—records how Henry VIII stole lands from the Catholic Church: about thirty percent of Medieval England. He then gave most of that land to his unscrupulous courtiers, the “New Men.”

In time, the New Men’s heirs would use their fortunes to build factories, thus kicking off the Industrial Revolution. Ordinary, middle-class workers couldn’t compete with the speed and efficiency of the machines. Their work was superior in terms of quality and durability, but the machines were quicker and cheaper. So, those middle-class workers—men who owned their own businesses, trading on their skill and experience—were herded into factories to work the boss’s machines for a small cut of the boss’s profits.

Clearly, this system was bad for the workers. But it also turned out to be bad for consumers, who were increasingly forced to buy goods made in factories by “wage-slaves” rather than goods handmade by independent craftsmen. The only people who benefitted from the Industrial Revolution were the heirs of the New Men.

This system—what we call capitalism—has a deleterious effect on a society’s morals as well. According to Chesterton, “what destroyed the Family in the modern world was Capitalism”:

It is Capitalism that has forced a moral feud and a commercial competition between the sexes; that has destroyed the influence of the parent in favour of the influence of the employer; that has driven men from their homes to look for jobs; that has forced them to live near their factories or their firms instead of near their families; and, above all, that has encouraged, for commercial reasons, a parade of publicity and garish novelty, which is in its nature the death of all that was called dignity and modesty by our mothers and fathers.

According to Belloc, there were only two ways out:

Those who favour the first course are the Conservatives or Traditionalists. They are men who respect and would, if possible, preserve the old forms of Christian European life. They know that property was thus distributed throughout the State during the happiest periods of our past history; they also know that where it is properly distributed to-day, you have greater social sanity and ease than elsewhere. In general, those who would re-establish, if possible, the Distributive State in the place of, and as a remedy for, the vices and unrest of Capitalism, are men concerned with known realities, and having for their ideal a condition of society which experience has tested and proved both stable and good. They are then, of the two schools of reformers, the more practical in the sense that they deal more than do the Collectivists (called also Socialists) with things which either are or have been in actual existence. But they are less practical in another sense (as we shall see in a moment) from the fact that the stage of the disease with which they are dealing does not readily lend itself to such a reaction as they propose.

The question, then, is how do we bring about a “distributive state”? Well, first it should be clear what we don’t do. Contrary to what our critics claim, distributists don’t want to seize all private property and dole it out equally.

Chesterton was very clear on this point: “We have formulated questions to be addressed to Parliamentary candidates,” he wrote. “We think that something can be done through Parliament to make small ownership easier to gain and to hold. But we are not a Party, and our main effort must be always outside Parliament.” Rather, “The one thing needful is to preach steadily and work steadily for small ownership and the localization of production and consumption, while refusing to consider the irrelevant problem of the big town.”

The distributist program is simply that. You, as a free citizen, make choices that lead to a fairer, freer society.

Step one is to get out of the city. Fr. Vincent McNabb, the third Founding Father of distributism, dreamed of an England “shaking the town-dust of neopaganism from its feet.” When asked by a young man for practical advice, he published an open letter called “Fifteen Things a Distributist May Do.” You can read the list in the collection online, and you should. My favorite is number four:

Buy some hand-woven cloth. Wear it. Buy some more. Wear that too. Remember the noble advice on how to eat cucumber, cut it into two parts (equal or unequal). Eat one part. Then eat the other. Your home-spun will instruct you better than the Declaration of Independence will instruct you on the dignity and rights of man.

Buy some land and start a garden. Grow as much of your own food as you can. Forego a vacation so you can spend a little extra money buying the rest of your meat, dairy, and produce from a local farmer.

If you can’t buy your furniture from a craftsman—very few of us can—get some used from a consignment shop. Find something sturdy and reasonably attractive. Just don’t, whatever you do, give your money to a corporation like Amazon or Ikea. Even if we can’t give our business to the good guys, we don’t have to give it to the bad guys. As Fr. McNabb wrote,

Quit Babylon for love of the Babylonians. And do not seek ease or security you can obtain by using Babylon. What will it avail you to cease living in Babylon if you do not also cease living on Babylon?

And, if you can, band together with other families who share your values. The point isn’t to have faithful Catholics holed up in little compounds all over the country. No: men are made for community. And community is yet another good that industrialism has robbed from us.

Nazareth was always a highland hamlet, whose every stone was hallowed by thirty years of God’s redemptive love. Gradually our eyes began to see this highland hamlet as one of the necessities. . . of the enterprise of redemption. For Nazareth was the Unit of human society. It was a family of families gathered together in aid and defense of life.

I’ve never seen this ideal lived more fully than in St. Marys, Kansas—a place known and loved by every soul reading this magazine. If anyone tries to tell you that distributism is a kind of communism, look to St. Marys. That’s what we strive for: a “family of families” working together to build a more just and fair society according to the perennial teachings of the Catholic Church.

That’s a very rough definition of distributism, and this has been a rough outline of the distributist philosophy. I hope it will at least whet the reader’s appetite. If he’d like to learn more, I recommend these three books: The Outline of Sanity by G. K. Chesterton, The Servile State by Hilaire Belloc, and The Church and the Land by Fr. Vincent McNabb.

Then again, as Fr. McNabb himself said, “The Bible, and especially the Gospels, are the world’s best handbook of economics.” Start there, and see if you don’t hear the call of Nazareth. 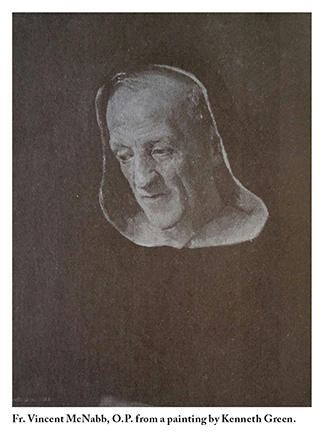