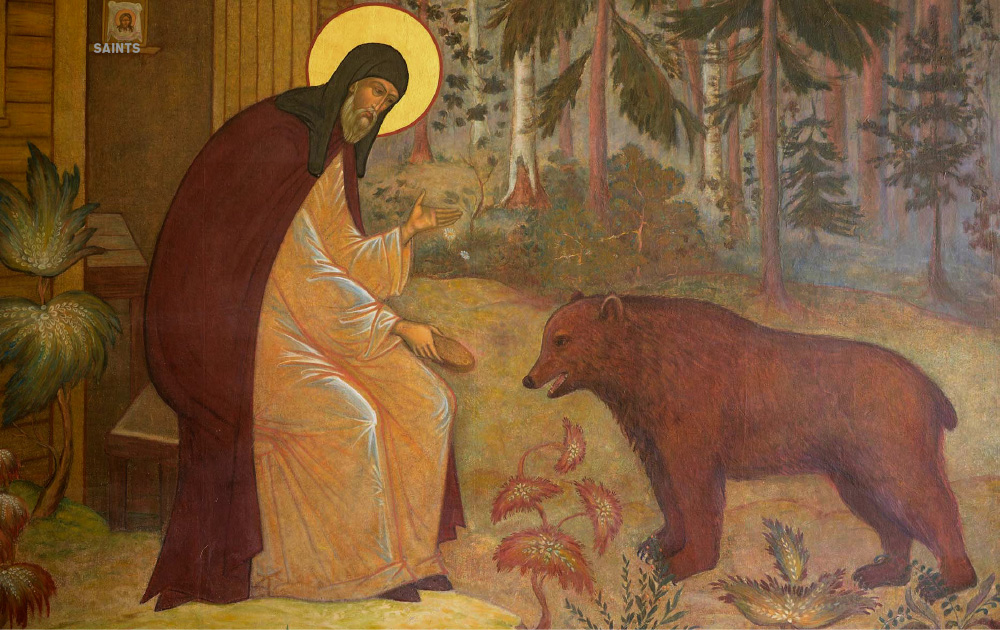 Searching for a lost foal, a Russian schoolboy espied an elder standing motionless under an oak. The boy approached as the elder wept in prayer. Making obeisance, the young boy asked for enlightenment: his brothers and schoolmates harassed him since he was slow to learn, and could neither read nor write. The monk blessed him. He took bread out of his satchel with three fingers, and gave it to the boy. With this, he said “Take this in thy mouth, child, and eat; this is given thee as a sign of God’s grace and for the understanding of Holy Scriptures. Though the gift appears but small, the taste thereof is very sweet.” The bread tasted like honey. The boy replied with scripture, saying “Is it not written, ‘How sweet are thy words to my palate, more than honey to my lips, and my soul doth cherish them exceedingly?’” In answer, the monk said “If thou believest, child, more than this will be revealed to thee. Do not vex thyself about reading and writing: thou wilt find that from this day forth the Lord will give thee learning above that of thy brothers and others of thine own age.” Having so prophesied, the monk turned to leave. The boy prostrated himself, and begged the man to visit his parents.

Hailing from a noble and devout household, Bartholomew was certain that his parents would be glad to host a religious. When Bartholomew returned with a monk instead of a foal, his parents were surprised. When this same monk took him to the family’s chapel and instructed Bartholomew to read the Psalms aloud, however, his parents were astounded. The whole family began to fear and to praise the Lord. They related how Bartholomew, while still in his mother’s womb, proclaimed “Holy, Holy, Holy” for the whole congregation to hear during the course of the liturgy. The parents begged the monk to stay and calm their fears about their son, who was a marvel to them. The family shared a meal with the monk, and accompanied him to the door. The monk declared that many would be led to the Holy Trinity through this child, stepped outside, and vanished.

After these events, Bartholomew disciplined his body, tirelessly attending daily liturgies and reading scripture. When his parents lost their wealth and their lands to the invasion of the Tatar hordes, they moved from the province to the town of Rostov, about 135 miles northwest of Moscow. With misfortune following closely at their heels, Rostov was soon taken by Ivan Danilovich, Grand Duke of Moscow. Its residents were forced to surrender their estates. In exchange they “received wounds and humiliation,” and were sent forth as beggars. Cyril again uprooted his family, this time settling 90 miles closer to Moscow in the town of Radonezh, whence our saint received his toponymic.

Upon his parents’ death, Bartholomew joined the Monastery of the Theotokos at Khotkov which his brother, Stefan, had also entered. Bartholomew convinced Stefan to seek a harsher rule with him. Both set out for the forest, where they sought a true wilderness. When they came upon a wasteland, they settled down, finding satisfaction in accepting that which God bestowed on them. Their daily lives were dedicated first to the construction of a small hut, and then to a chapel. Upon its completion, Bartholomew asked Stefan to decide in whose honor the chapel would be named. Remembering the prophesy and the miracle in the womb, Stefan wondered at the question. He declared that the chapel must be dedicated to the Holy Trinity, as Bartholomew himself was forechosen to be dedicated to the Trinity in his life. After this work was completed and the chapel was dedicated by a priest, Stefan returned to community life in the monastery and left his brother to his wilderness hermitage. 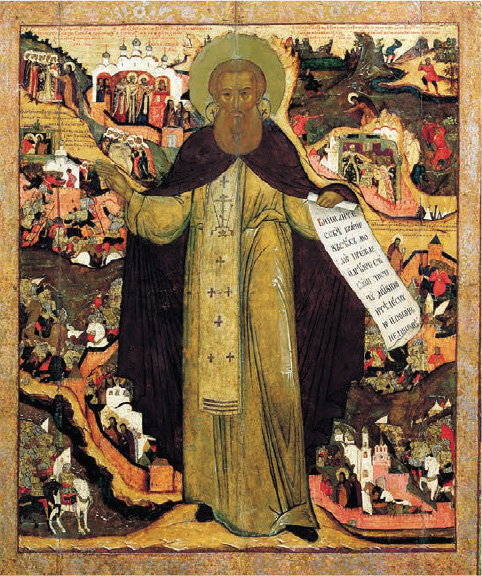 After a time, Bartholomew desired to take monastic vows. He invited an abbot to stay with him for a time, and to give him tonsure. On October 7th, the feast of Saints Sergius and Bacchus in the Byzantine Calendar, he received tonsure and was given the name Sergius. After the abbot left, Sergey lived off the land in obscurity. However, he was not entirely alone in the wilderness: he was often visited by wildlife, most famously befriending a bear. The bear did not come to harm him, but to wait for its share of bread. When even this was scarce, St. Sergey would leave his slice for the bear and go hungry himself. The entry gate to the modern-day monastery complex, built on the site of this first chapel, is decorated with a fresco of St. Sergey and the bear. It represents his supernatural mastery of the earthly world, as well as his generosity and hospitality to all who enter in.

At other times, demons would visit the monk in animal form, in order to disturb his peace and disrupt his holy life. The medieval hagiography does not pretend to know how many years St. Sergey lived there alone, but after some years, his reputation became known. Monks from other monasteries sought him out and petitioned to endure the ascetic life with him. While he took the monks on as his brothers, he explained that he would not be their abbot, as the root of all evil lies in pride of rank and such ambitions. They all became monks living under the rule of the abbot who had tonsured St. Sergey. When that abbot died, however, the monks besought St. Sergey to be made a priest and abbot. He eventually gave in, though he had desired to live out his life as a regular monk among the brethren.

St. Sergey established a rule of cenobitic life for the monks—a rule which is still in use today. Thereby, he is recognized by some as an Eastern St. Benedict, the father of monasticism. As the fame of St. Sergey and his monastery grew, so did the number of his monks. A lay community likewise grew around the compound. The monks no longer relied entirely on the land for their sustenance, as the town (posad) growing up alongside the monastery began to provide for some of their needs. St. Sergey led this monastery in humility and obedience until the natural end of his days at the age of 78. He served as a witness to the Holy Trinity in word and in deed. Through the enduring fame of his still-extant Sergius-Trinity Lavra monastery complex at Sergiev-Posad—one of the largest in Russia—this witness continues today.

Although renamed Zagorsk after a Bolshevik revolutionary by the secularizing Soviet government in 1930, and invaded by the Germans in 1941, the monastery was protected from destruction. The complex contains a graveyard, which features figures prominent in Russian history, such as Boris Godunov. It also houses architectural and artistic treasures, such as pristine Naryshkin Baroque architecture of the refectory, Muscovite-Pskovian style belltowers, and Andrei Rublev’s original icon of the Trinity. All this led to the complex being named a UNESCO World Heritage Site. The Lavra is also the Orthodox equivalent of the Vatican—their Patriarch has had his main residence there since the late 17th century.

Pilgrims largely come to reverence the relics of St. Sergey of Radonezh, and to ask him for healing. They come to collect or bathe in the waters of a miraculous spring, which is said to have appeared within the walls of the monastery during the Polish Siege. By tradition, pilgrims bottle this water to bring home. It is consumed every morning during the Lenten Great Fast in order to help purify spirit, mind, and body in the way of the monks and St. Sergey. Although Catholics and Orthodox share many martyrs, St. Sergey is one of the rare Russian Orthodox confessors who lived entirely after the schism, and is recognized and honored as a Saint in both traditions.* As such, St. Sergey could be a powerful advocate for healing and unity in the apostolic churches.

The holy apostle Bartholomew received the gift of martyrdom some 1,200 years before the birth of St. Sergey in 1314—or 1319, or 1322—but is still intimately connected with the medieval account of the life of St. Sergey (given, in brief, above.) The apostle was martyred in the “Persian way”—that is, flayed alive and beheaded—as retribution for converting Polymius, then King of Armenia, by the King’s successor and brother, Astyages. As such, St. Bartholomew is classically depicted wearing his skin draped over his body, or shedding the skin of his earthly life and entering Heaven. By the Middle Ages, St. Bartholomew became connected with manuscripts—themselves being made of flayed and dried skin.

Christened Bartholomew (or Varfolomey), St. Sergey was converted to a life of quiet obedience by a miraculous encounter which rendered him literate. Through our weaknesses, may we, too, be quietly converted evermore to Christ. St. Bartholomew is surely pleased by his namesake.

* While St. Sergius was born into the Russian Orthodox Church nearly three centuries after the schism between Rome and Constantinople, he was among 21 Russian saints approved by Pope Pius XII in 1940 for liturgical veneration in the Russian Greek Catholic Church. This decision is consistent with the increasingly prevalent view that the Great Schism did not occur, or at least did not occur in full, in 1054 but rather took centuries to fully manifest itself. 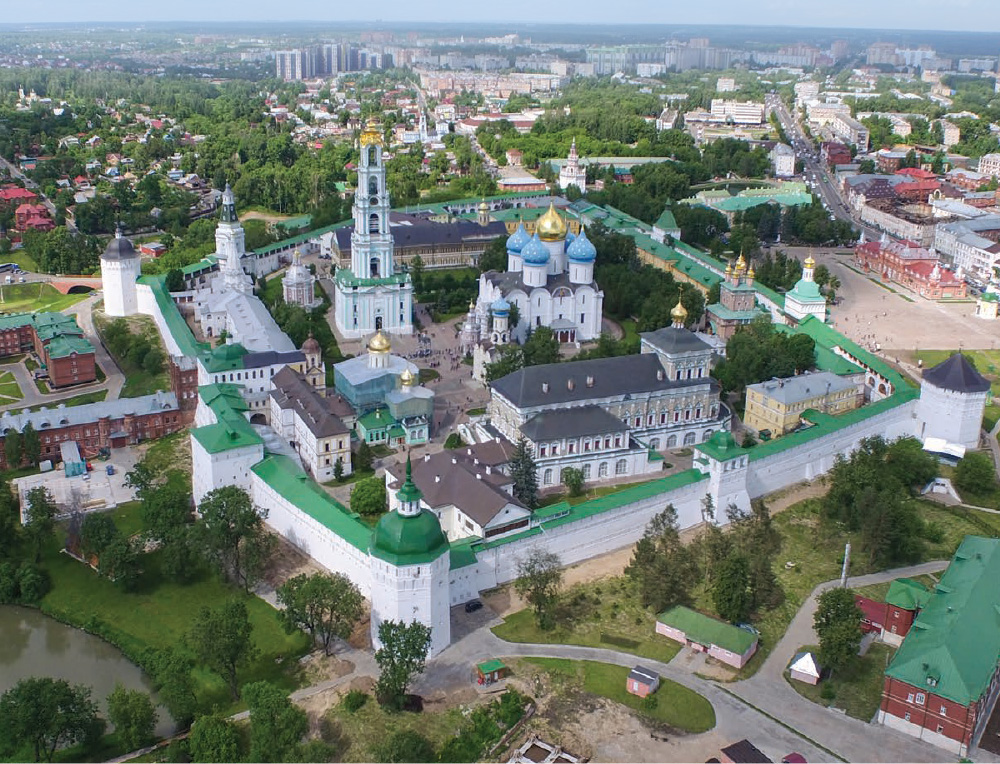 The Trinity Lavra of St. Sergius is the most important Russian monastery and the spiritual center of the Russian Orthodox Church. The monastery is situated in the town of Sergiyev Posad, about 44 mi to the north-east from Moscow by the road leading to Yaroslavl, and currently is home to over 300 monks.
After the Russian Revolution of 1917, the Soviet government closed the Lavra in 1920. Its buildings were assigned to different civic institutions or declared museums. Part was used for training electrical engineers specializing in radio. In May 1923, Charles Ashleigh reported how the hall was used to demonstrate the new radio technology before a mixed audience primarily composed of peasants and soldiers, but with some townspeople. The broadcast started with an announcement followed by music with a band from the Moscow cavalry playing Stenka Razin. Then the audience were treated to a short lecture on the benefits of chemical manure and machine plows. After a gypsy song the performance was brought to a conclusion with a talk about the wonders of radio. In 1930, monastery bells, including the Tsar-Bell of 65 tons, were destroyed. Pavel Florensky and his followers prevented the authorities from stealing and selling the sacristy collection, but overall many valuables were lost or transferred to other collections.
In 1945, following Joseph Stalin’s temporary tolerance of the church during World War II, the Lavra was returned to the Russian Orthodox Church. On April 16, 1946, divine service was renewed at the Assumption Cathedral. The Lavra continued as the seat of the Moscow Patriarchate until 1983, when the patriarch was allowed to settle at the Danilov Monastery in Moscow. After that, the monastery continued as a prime center of religious education. Important restoration works were conducted in the 1960s and 1970s. In 1993, the Trinity Lavra was inscribed on the UN World Heritage List.