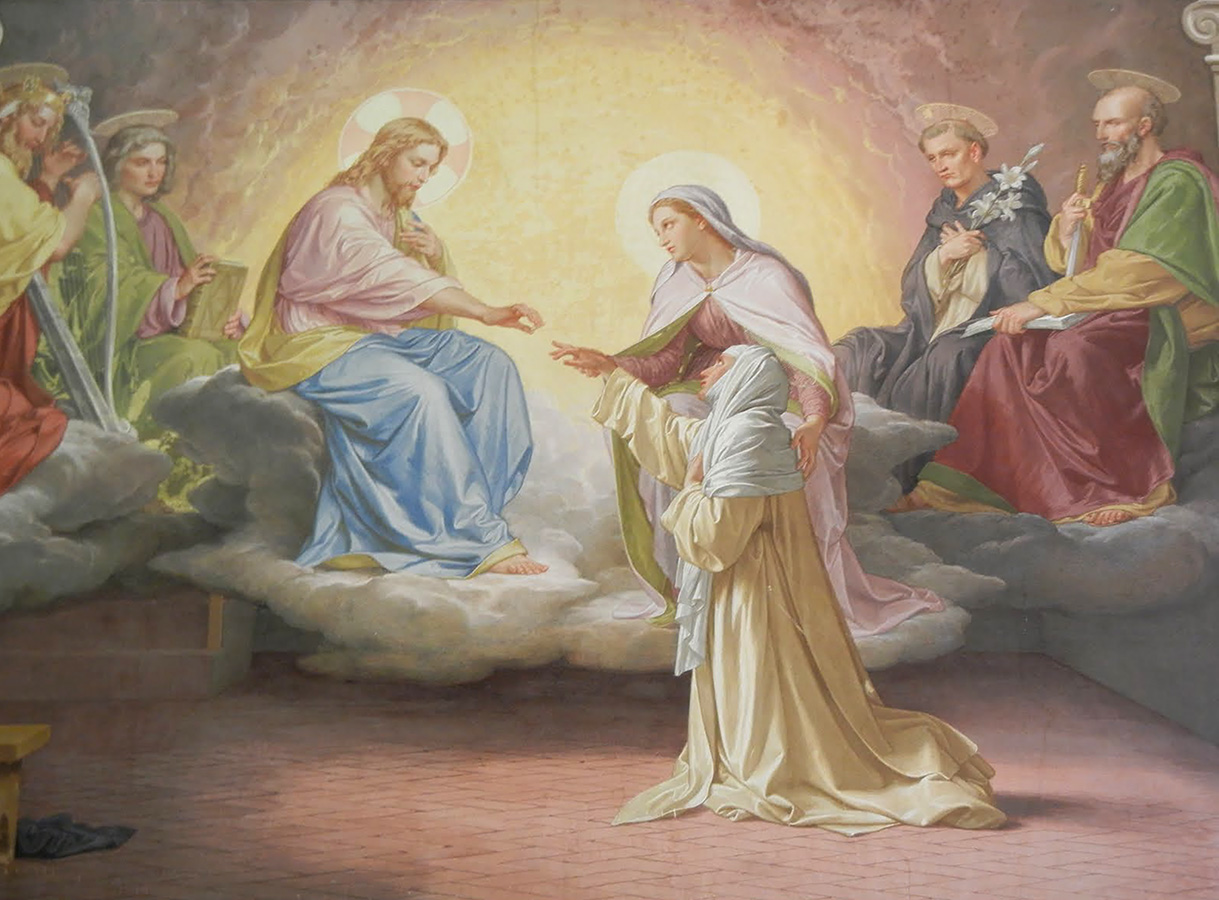 Caterina di Jacopo di Benincasa was the twenty-second child born to devout parents in the Republic of Siena on March 25, 1347. Naturally speaking, Catherine had very little hope of being anything greater than ordinary and never learned to write.

Before most children are prepared to examine their own conscience, Catherine began experiencing visions of Christ and the saints. By the age of seven, she had consecrated her virginity to Our Lord.

Catherine’s adolescent years were filled with many tribulations. On account of her striking beauty, her parents strongly pressured her to take a husband, but the young saint was determined to live a consecrated life as a third-order Dominican Sister of Penance. Catherine went to great lengths to maintain her promises to Our Lord and marred her appearance by cutting her hair, fasting rigorously, and performing even more radical mortifications. After years of struggle and strife in her family, Catherine’s parents finally relented. Her mother personally petitioned the “Mantalleta’’ Sisters of Penance to allow her daughter to join. After a series of rejections and further insistence from her mother, in 1366 at the age of 19, Catherine took the holy vows of poverty, chastity, and obedience within the third order Dominicans of the Sisters of Penance.

As a third-order religious, Catherine wore the habit of the Mantalleta Sisters but remained at home. Her room was her cloister. She barely ate, barely slept, rarely spoke, and always prayed. Her extraordinary asceticism was rewarded with extraordinary mysticism. At the age of 21, she experienced what is called a “Mystical Marriage” with Our Lord Jesus Christ. Our Lord appeared to Catherine together with the Blessed Virgin, saints Peter and Paul, and King David, playing his harp. Our Lord praised her abandonment of the pleasures and vanities of the world, He bid her make a promise that she kept faithfully all her life: “I marry you to me in faith, your Creator and Savior. Keep this faith unspotted until you come to me in heaven and celebrate the marriage that has no end.”

During this mystical marriage, Catherine described a ring that Our Lord gave her that she wore on her right hand. Though she could see it at all times it was kept invisible to the rest of the world. Likewise, Catherine was also permitted to share in the suffering of her Bridegroom by receiving the mark of the stigmata, at first visibly, and then hidden at her request. Following what her spiritual director called “the Marriage,” Our Lord introduced Catherine’s new mission: to leave her cell and grow in the love of God through the love of neighbor, following His Providence wherever He should lead.

Strengthened by a divine promise to support her in this new mission, Catherine left her cell and began her public life. As the Black Plague raged in Europe, she tended the sick and buried the dead with her own hands. She fed the hungry and clothed the naked. With ardent zeal and supernatural wisdom, she preached the wonders of God and recalled many sinners to repentance. Bishops granted extraordinary faculties to traveling clergymen, allowing them to follow Catherine as she preached so as to hear the multitude of confessions she inspired from her listeners.

Catherine’s ministry soon drew a band of devout followers; a family of holy penitents who all called her “Mother,” “mammina.” She was a true mother, loving, compassionate, and fervent for their spiritual growth and eternal happiness. Her mission was confirmed by miracles as well. She worked healings, multiplied food to feed the hungry, expelled demons, and prophesied.

The saint’s fame spread like wildfire, reaching both secular and ecclesiastical authorities. God gave her such wisdom that princes, priests, bishops, and even the Holy Father himself, on multiple occasions, sought her counsel. Though unlearned and unable to write, she dictated hundreds of letters advising Pontiffs and princes during one of the most trying times in the Church’s history. Through her many epistles, she provoked reform in the Church, inspired a new Crusade, and to a greater or lesser degree, brought an end to the Avignon Papacy.

Though the years of her ministry were marked with success, growth, and countless conversions, there were great difficulties for Catherine and many occasions for passive mortification as she met hostility on numerous fronts. Jealous sisters and religious spread horrific rumors attacking her virtue, attributing her miracles to the work of the devil, her successful preaching to attractively-worded heresy, and many who were unable to accept her Divine mission criticized her conduct as unbecoming of a woman, let alone a woman of God.

In her thirty-third year, her physical strength began to fail. Catherine was unable to consume any food but the Holy Eucharist, leaving her body emaciated to the point of death. In January of 1380, her health saw a sudden plunge that coincided with the people of Rome rebelling against the Holy Father.

As her health rapidly declined, Catherine was rendered unable to walk on her own. On some days she could only move her hands and feet, on others she could hardly speak. She still survived on the Eucharist alone, her only sustenance.

She suffered intensely for thirteen weeks, and her spiritual director records that her pains increased with each passing day. In her final hours, she was strengthened by the Holy Eucharist, the Sacrament of Penance, and the Apostolic blessing from her priestly sons. On the last day of April 1380, St. Catherine departed this world to be eternally united to her Bridegroom. 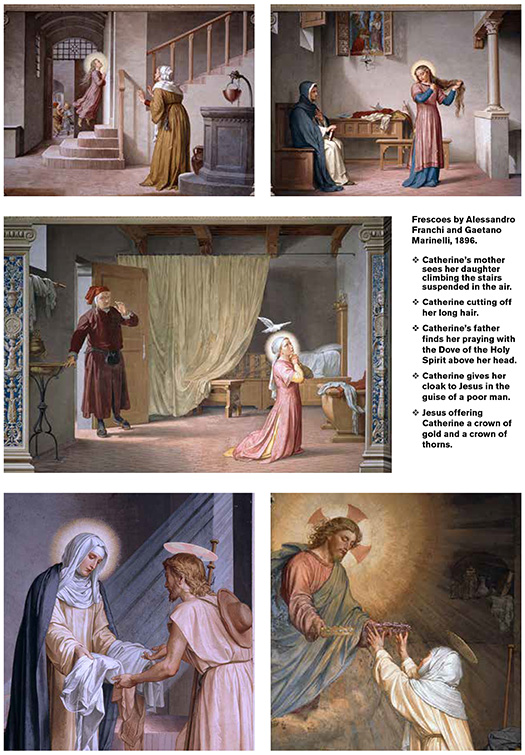 Despite her own marvelous gifts of mysticism, miracles, and ecstasies, Catherine never lost track of what she calls the “ordinary way” to sanctity. In her Dialogue, St. Catherine explains that there is a bridge uniting Heaven and Earth. Growing in virtue by faithfully performing one’s duty of state is the “ordinary way” to pass from Earth to Heaven across the bridge of Our Lord Jesus Christ.

“Open your eyes and look within me and you will see the dignity and beauty of my reasoning creature.” Thus God spoke to St. Catherine as recorded in her Dialogue.

This is one of the greatest treasures of St. Catherine’s spiritual legacy: our rationality is the image and likeness of God in our souls. It is our eternal soul, able to know and love, which makes us like God.

Our Lord revealed to St. Catherine that meditating on the infinite wisdom of God reveals the true glory and beauty of the human soul because our rationality is the very image and likeness of God. By this means we find ourselves in Him and Him in us.

But God not only made us rational, He also made us free. St. Catherine in her writings asserts that the greatest gift God gave to man was his free will.

Oh inestimable and sweetest fire of love, how clearly you show forth, with this gift of freedom, the excellence of your rational creature!

In a somewhat spectacular assertion, St. Catherine applies a passage from the Gospel of St. Matthew to God Himself at the moment of our creation:

“Let it be done as you wish,” says Almighty God to each one of us, “I am making you free, so that you may be subject to nothing but me.”

Love of God to Love of Neighbor 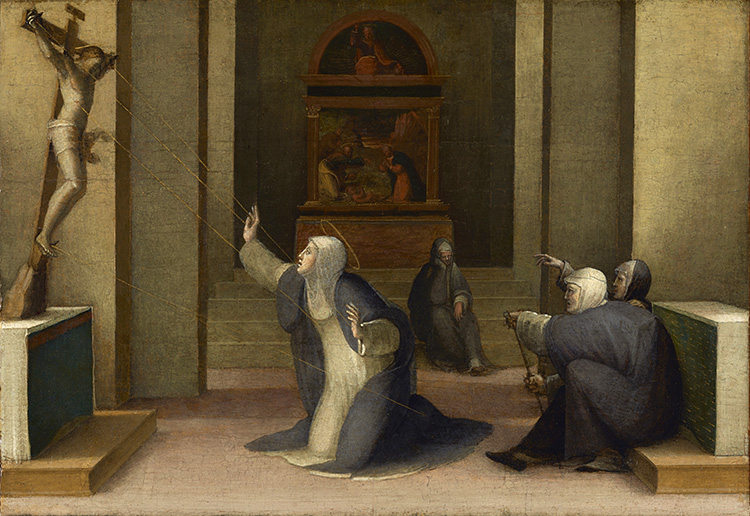 Recognizing this inherent glory and beauty of the human soul reflecting the infinite love and wisdom of God, we cannot help but realize that we must love in others that which is the object of God’s love in them. Seeing the love of the Creator for all His rational creatures, the loving soul naturally spreads its love for the Creator to its fellow creatures. St. Catherine writes:

The love that the soul sees that God has for her, she, in turn, extends to all other creatures. . . she immediately feels compelled to love her neighbor as herself, for she sees how supremely she herself is loved by God, beholding herself in the wellspring of the sea of the Divine Essence.

It is this love that motivated St. Catherine throughout her heroic apostolic ministry. She saw clearly the beauty and worth of every human soul and worked tirelessly to help them on the way to salvation.

Despite this profound understanding of the glory and beauty of the human soul, St. Catherine was in no way naive about our fallen nature. During her time, (much like our own), there was widespread disgrace, depravity, and public scandal at every level of the Church.

However, rather than focusing on the tragedy of sin and the justice of righteous retribution, St. Catherine chose to focus on sin as an opportunity for God to bring a soul closer to Him. “I always pluck the roses from the thorns,” the Lord told her, “endless are the ways of my Providence to draw sinners out of the guilt of mortal sin.” Everything is an opportunity for grace.

Rather than focusing on the sickness of the soul, St. Catherine focused on the remedy, the saving power of the Precious Blood of our Lord Jesus Christ. She referred to Christ as a God of seemingly “uncontrollable love” made manifest in His Holy Incarnation. She explains that the actions of our God are so incredible, so beyond what our weak intellects would call “reasonable,” that to bring them about He must be consumed by some divine “madness” and “drunkenness” of love for His creatures.

The supernatural perspective of this great saint strengthened her and her followers during one of the worst crises in the Church’s two-thousand-year history. Amid rampant clerical immorality, corruption, and schism, Catherine received a special revelation from God that we should all take very much to heart. . . In a word, that the sins of the clergy should not lessen our reverence for them.

The reverence you pay to [priests] is not actually paid to them but to me, in virtue of the Blood I have entrusted to their ministry. . . And just as the reverence is done to me, so also is the irreverence. . . You should hold [these sinful ministers] out to me with tears and great desire, so that I in my goodness may clothe them with the garment of charity. . . Then I will let myself be constrained by the longing, tears, and prayers of my servants, and will be merciful to my bride by reforming her with good and holy shepherds.

To truly love St. Catherine, we must learn about her. Here are some helpful resources to more deeply discover the life and legacy of St. Catherine of Siena, “the saint of our humanity.” May she intercede for us for the grace to be taken with Divine Charity, who has so liberally loved us!