Our Lady of Consolation

The origin of this invocation is derived from the Augustinian monks who propagated this particular devotion. In 1436, the Confraternity of the Holy Cincture of Our Lady of Consolation was founded in Bologna, Italy. It was based on an Augustinian tradition which holds that Saint Monica in the fourth century was distraught with anxiety for her wayward son, Augustine, and that Mary gave her a sash which the Virgin wore, with the assurance that whoever wore this belt would receive her special consolation and protection. Along with Augustine and Monica, Our Lady of Consolation is one of the three patrons of the Augustinians. The “Augustinian Rosary” is sometimes called the “Corona (or Crown) of Our Mother of Consolation.” 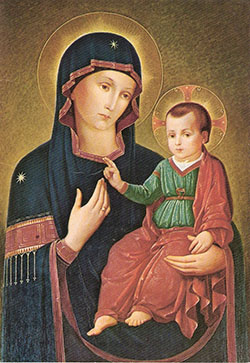 An ancient story relates that St. Eusebius of Vercelli brought back an icon of Our Lady of Consolation when he was returning from exile in Egypt in 363. This icon was presented to the city of Turin. Later St. Maximus, Bishop of Turin, established a small shrine to house the icon in a church dedicated to St. Andrew. The icon became the object of great veneration, and the church became the Santuario della Consolata. Giuseppe Allamano, rector of the Santuario della Consolata, founded the Consolata Missionaries in 1902; they brought the devotion to Africa. At the age of 19, Joseph Marello of Turin contracted typhus. He attributed his recovery to Our Lady of Consolation and went on to found the Oblates of St. Joseph.

There are several versions of the image of Our Lady of Consolation. The original one is in Turin at the Santuario della Consolata. A star on her shoulder is characteristic of almost all the images. The traditional depiction of Our Mother of Consolation in Augustinian houses shows Mary holding the child Jesus on her lap. Jesus and Mary both hold the Augustinian cincture in their hands.

In France the dioceses of Vannes, Valence, Montpelier, Laval, Nantes, Périgueux, Tours and many others, possessed churches or chapels dedicated to Mary under this title. In 1652, Pope Innocent X encouraged devotion to Our Lady of Consolation by establishing a confraternity.

The devotion to Our Lady of Luxembourg, Comforter of the Afflicted, was initiated by the Jesuits in 1624 and led to the election of Our Lady as the protectress of the City in 1666 and of the Duchy in 1678. After the destruction of the old pilgrimage chapel at the time of the French Revolution, the statue of Our Lady of Luxembourg was moved to St. Peter’s Church, today’s Notre Dame Cathedral in Luxembourg City. Statues depicting her can be found in niches in buildings throughout the city of Luxembourg. From there, the devotion was adopted by the English Benedictine nuns of Cambrai.

Immigrants from Luxembourg transposed the devotion to Our Lady of Consolation to the United States.

In 1848, Luxembourger immigrants began to settle in the area around Dacada, Wisconsin. The oldest statue of Our Lady of Luxembourg found in the United States was brought to Dacada by a Luxembourger immigrant, Anna Margaret Deppiesse, in 1849. Mrs. Deppiesse donated it to St. Nicholas Church, where it can be found in an alcove shrine below the choir loft. When the church was remodeled in 1941, a mural depicting Our Lady of Luxembourg (Mary, Consoler of the Afflicted) was added to the apse in the sanctuary. The mural, which honors the parish’s Luxembourgian roots, was painted by liturgical artist, Bernard Grenkhe, using the al secco method (i.e., painting on wet plaster so as to make the image permanent. 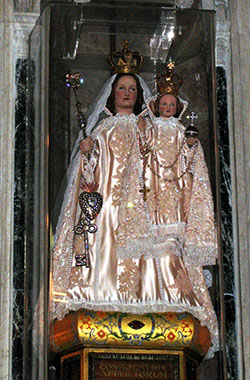 During the Civil War, three parishioners of St. Augustine’s Parish in Leopold, Indiana fought for the North and were imprisoned at the notorious Andersonville Prison. Henry Devillez, Isidore Naviaux and Lambert Rogier, formerly of Belgium, vowed that if they survived, one of them would makeN a pilgrimage to Luxembourg and obtain a copy of the statue of Our Lady of Consolation that stood in their ancestral church. Rogier went to Luxembourg in 1867 and upon his return enshrined it in St. Augustine’s, where it now stands to the left of the main altar. In September 2013, Archbishop Joseph W. Tobin of Indianapolis dedicated a larger outdoor garden shrine.

The statue of Our Lady of Consolation inside the basilica in Carey, OH.

One of the two main celebrations held each year in the Tacony section of Philadelphia was Our Lady of Consolation’s Feast Day Parade. (The other was Memorial Day.) Each July statues of the saints were paraded through the streets of the neighborhood.

The Basilica and National Shrine of Our Lady of Consolation is located in Carey, Ohio.

Another center of veneration and pilgrimage, which also adopted Our Lady, Comforter of the Afflicted, is Kevelaer in Germany, not far from the Dutch border. In 1642, a copperplate engraving, representing Our Lady of Luxembourg, was installed in a sanctuary erected the same year. It is one of the best visited Catholic pilgrimage locations in north-western Europe. Pope John Paul II visited in 1987.

With the approval of the Archbishop of Turin in northern Italy, the new church was affiliated with the original sanctuary of Our Lady of Consolation, and a painting, closely resembling the miraculous shrine painting in the Santuario della Consolata of Turin, enriched with similar indulgences and privileges, was brought to West Grinstead. The Shrine Statue was canonically crowned by the Papal Delegate, Bishop Butt, on behalf of Pope Leo XIII, in July 1893.

The Augustinian church of Our Mother of Consolation in the Shiroyama district of Nagasaki is also named in her honor.

The SSPX chapel in Iloilo City, Philippines, is named in honor of Our Lady of Consolation and St. Joseph.

The feast of Our Lady of Consolation is one of the solemnities not inscribed in the General Roman Calendar, but which are observed in particular places, regions, churches or religious institutes. Augustinians observe September 4; the Benedictines July 5.

The popular girl’s name “Consuela” is derived from this title. 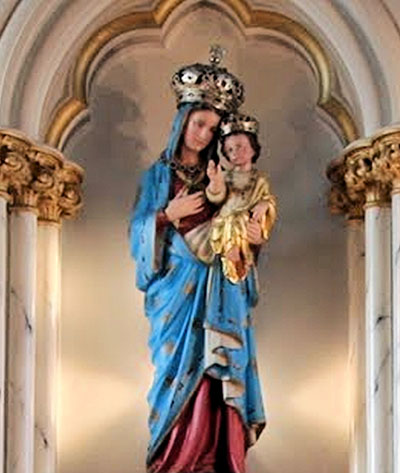