Iconoclasm in the American South

“Remove not the ancient landmarks thy fathers have set.”—Prov. 22:28

Every fact in history is contained in God’s eternal decrees through either command or permission. Thus, any attack against the facts and outcome of history is ultimately an attack against God Himself. Rebellious man in his attempts to recreate the world in his own image finds the need to do away with history. He will first debunk and rewrite it. He then seeks to arrest it, and finally to remove it from his reality altogether. To do this the symbols must go. History and the symbols of past civilizations, particularly those that clearly demonstrate God’s intervention or providence, will be most vehemently attacked.

Bradford on the South

The Catholic historian M.E. Bradford has called the antebellum South the last great medieval hierarchical Christian civilization. It is not the purpose of the writer here to try to prove or defend this statement in an apologia, but to show why the “progressive” modern man must act as an iconoclast to the South’s symbols and images.

All symbols have power. To any ancient or traditional man, such a statement would be so obvious to him, he would see no reason to state it. Modern man at least subconsciously believes this as well. Otherwise, contemporary society would not be so vehemently trying to destroy so many symbols of the past. Any student of Southern American history immediately recognizes this as he sees Southern monuments and memorials defaced and removed. All conquering people have sought to defile, destroy, and desacralize all icons of the conquered people. In other words, they act in the nature of the iconoclast.

For example, ancient Romans built their temples on top of the temples of the people they conquered, and ancient Egyptians defaced sarcophagi of previous dynasties. Only the Holy Roman Catholic Church has been hesitant to engage in a wholesale removal of what a converted people or civilization considered sacred; only in cases where the symbols were overtly satanic or diabolical. The reasons have to do with the theology of the Church. Christianity has always seen history as the working out of the external decrees of God in time through primary and proximate causes for His own glory and the good of all the elect. Therefore, in all people’s history we would expect to find the workings of providence. There are no disassociated facts of history. Even what man “means for evil, God means for good.”

Thoughtful theologians and Church Fathers thus could often find prototypes in the symbols and thinking of pre-Christian civilizations that were pointing to or prefiguring the coming of the fullness of the gospel. The Church then used many of these “pre-figurings” as tools for converting the pagan peoples. St. Patrick is a good example of this. In fact, the Reformers of the Protestant Revolt would actually use this as an accusation against the Roman Church. They saw the Church as compromising with Paganism.

To fully understand the reason why people want to destroy the symbols of the past, to move or remove the boundary markers that others before have established, one must first understand what a symbol is. One might also ask how a symbol or icon is a boundary marker. Boundaries establish at least two things: definition and limits. The symbol defines or marks out what it stands for. These definitions in the context of history usually come into existence or at least are made articulate after the fact.

The battle flag takes on all the connotations for which the soldier fought: hearth, home, and country. A symbol stands for, points to, or embellishes something other than itself. In the case of a mere advertising logo this might not seem of great consequence; in the case of the modus of a civilization, or more particularly a religion (for one cannot have one without the other) this becomes quite apparent. The symbol will actually take on a religious connotation. It is from this connotation, that is, a more transcendent motive, that the symbol becomes imbued with power. In the case of the Sacraments of the Holy Roman Catholic Church, they actually become the reality they point to. Obviously, all man-made symbols fall into the natural sphere and not the supernatural, but because of their religious nature, they nonetheless have the power to move men to action. Thus the old symbols must go and the new symbols be installed.

Another property of a boundary has to do with limits. One is more secure when one remains in or recognizes limits. In the Douay-Rheims translation of the verse in the heading of this article, the use of the word “boundary” rather than “landmark” would be much more apropos when speaking of limits. Certainly, humility and piety would circumscribe behavior. This is another difficulty with the iconoclast; his behavior is often motivated by hubris.

Having given a brief outline of what I believe to be theological reasons for iconoclasm, I want to speak directly to this second property: the hubris of the iconoclast. It is an envy born of a lack of piety and humility. This appears rather blatantly in many who today attack the symbols and icons of the antebellum South. Richard Weaver, in The Southern Tradition at Bay, gives the definition of piety as a certain humility and understanding of one’s place. Weaver states, “Piety comes to us as a warning voice that we must think as mortal, that it is not for us either to know or to control all. It is a recognition of our limitations and contingency of nature which gives us the protective virtue of humility.”

Both the theological and the more narrow and petty reasons for iconoclasm that have been referred to previously can be demonstrated in a brief outline of the character of two of the most iconic heroes of the antebellum South: Robert E. Lee and Nathan Bedford Forrest. In addition to the character of these two men, their motives, memory, and memorials have in recent years been most viciously attacked and maligned by the modern iconoclast.

These men represent two of the best-known images of the Southern antebellum man. Lee was the erudite blue-blood of the coastal planter elite class, hailing from a long line of aristocratic plantation owners even though he did not farm himself. Stratford, where he was born, had been in the Lee family since the late 17th century. His father “Light Horse” Harry Lee was a military man, and Robert followed in his father’s footsteps.

Nathan Bedford Forrest represents another type of the Southerner: the self-made man. His generation of back-country “Westerners” were only a few generations removed from the original frontiersmen. Like Robert E. Lee, Forrest was orphaned early in life. Unlike Lee however, he had none of the financial and social resources to rely upon.

Anachronisms in the Narrative

There are other images of Southern manhood that could be discussed which do not fit the accepted historical narrative. General Richard Taylor, son of President Zachary Taylor, had a manservant who Stonewall Jackson observed in a heroic act at the Battle of Second Manassas. Jackson, who was certainly no stranger to acts of bravery in the heat of battle, sought the servant out to congratulate him after the battle. Jackson stated in front of his entire staff and other officers that the black man was “the bravest man I have ever seen.” Such acts of courage and fidelity to masters were noted by contemporary sources too many times to have been rare occurrences.

Stonewall Jackson’s servant Jim, for example, was known far and wide for his Christian virtues and his love and friendship to Jackson. Jim continued to attend and represent the Confederate cause at Confederate Veteran’s conventions up until his own death at the turn of the century. These kinds of behavior and images simply do not fit the modern narrative of the antebellum age.

Nathan Bedford Forrest is most often condemned because he bought and sold black slaves. But what is less often told of Forrest is the way in which he treated his slaves. If a slave was to be sold, Forrest allowed the slave to go and visit his or her new masters. If the owners did not meet the approval of the black slaves, Forrest would refuse the sale. In addition, Forrest would not break up a family; often to his own financial loss he would purchase the family members of slaves he already owned in order to reunite them. Over forty of his slaves rode off to war with him in order to, as he put it, earn their freedom. Eight of these slaves were part of his inner circle.

After the war Forrest gave them all land and helped establish them in business. All but one remained very loyal to him until the end of his life. In a speech that Forrest gave after the war to a group of black freedmen (a group that would later go on to be part of what became the NAACP), he told them that he would always be their greatest advocate, and to call on him when in need. At Forrest’s death over 30,000 people attended his funeral; over a third of them were black. The records show that Forrest’s contemporaries, both white and black, remembered him for his great humanity as well as his military genius. This aspect of the icon must be restored.

Until very recent times, one could find very little direct criticism of Robert E. Lee’s character. There is at least one poorly-written book entitled The Marble Man by Thomas Lawrence Connelly, but for the most part, all Lee’s biographers, including some of the best-known writers of American history, found the natural virtues in Lee unassailable. This was a man who believed that the word “duty” was the most sublime word in the English language. In later years after the war he was asked by a young mother that one thing she might teach her son that would make him a great man. Lee answered without hesitation, “Teach him, Madam, to deny himself.”

There are many such vignettes and quotes about Lee and from Lee himself that could fill volumes. Robert E. Lee’s natural virtues could be used by any humanitarian to teach young men what a gentleman should be. Though Lee was born to privilege, he rather easily translated these privileges into social obligations for his fellow man—as a leader, an educator, and a mentor. Even a precursory review of Lee’s life would reveal him to be a man set apart.

In this brief glance at these Southern icons, one can easily see that their behavior does not agree with modern sensibilities. However, one would hope that this might inspire each of us to closely study history and to be very careful that we do not, in some misguided act of righteousness, become iconoclasts ourselves and start removing landmarks. Let us hope that we might share this sentiment that Robert E. Lee uttered near the end of his life:

“My experience of men has neither disposed me to think worse of them; nor, in spite of failures, which I lament, of errors, which I now see and acknowledge, or of the present state of affairs, do I despair of the future. The march of providence is so slow and our desires so impatient, the work of progress is so immense, and our means of aiding it so feeble, the life of humanity so long, and that of the individual so brief, that we often see only the ebb of the advancing wave, and are thus discouraged. It is history that teaches us to hope.” 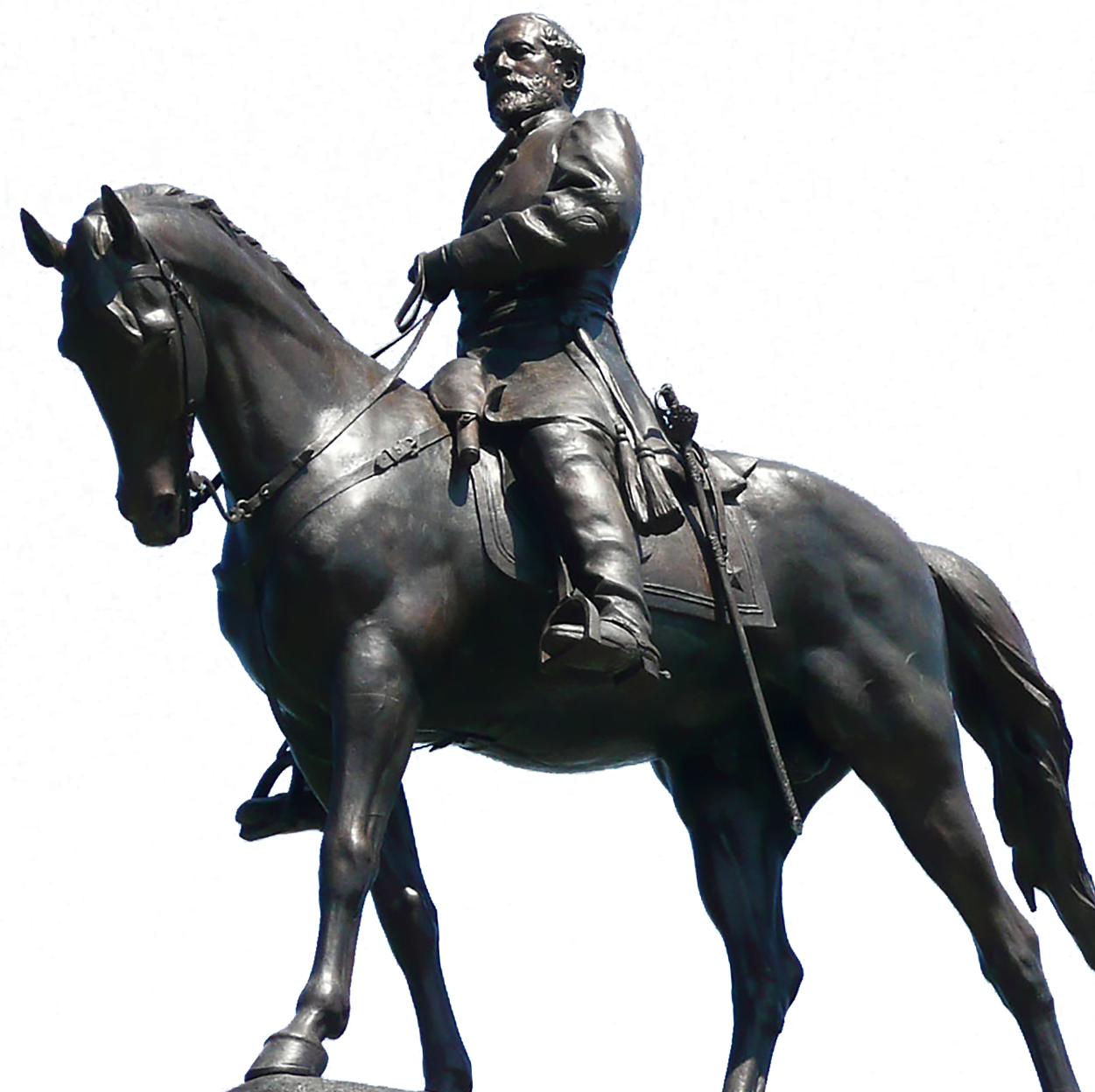