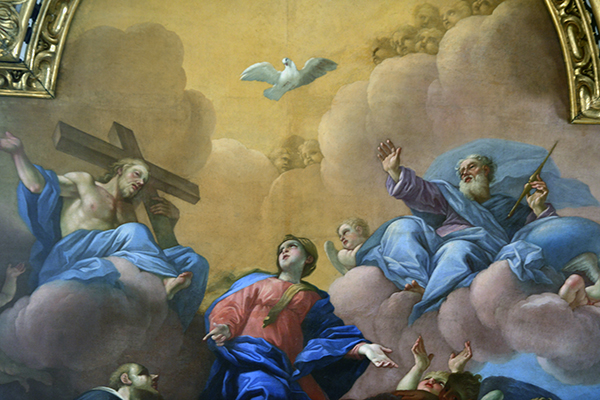 On November 1, 1950, Pope Pius XII defined the Assumption of Mary to be a dogma of faith: “We pronounce, declare and define it to be a divinely revealed dogma that the immaculate Mother of God, the ever Virgin Mary, having completed the course of her earthly life, was assumed body and soul to heavenly glory.” The pope proclaimed this dogma only after a broad consultation of bishops, theologians and laity. There were few dissenting voices. What the pope solemnly declared was already a common belief in the Catholic Church.

Editor’s Note: This article continues the series of straightforward responses to frequently-encountered questions and objections concerning the Catholic Faith. The questions and answers are adapted from Professor Felix Otten, O.P. and C.F. Pauwels, O.P.’s The Most Frequently Encountered Difficulties, published originally in Dutch in 1939.

Christ’s sacrifice on Calvary effectuated salvation for all peoples at all times, yet the Roman Catholic Church teaches that Christ is offered daily at the Mass. Does this not deny the sacrifice of the Cross and St. Paul’s Epistle to the Hebrews?

And so, the Sacrifice of the Mass is not a denial of the Cross-sacrifice. The texts of St. Paul, with which the Protestants want to prove that there is no other sacrifice other than the Cross offering, can be found in the ninth chapter of the Letter to the Hebrews, especially verse 12: “Christ … has entered the sanctuary … by His own blood … once and for all”; verse 25: “Neither did He commit himself repeatedly”; and verse 29: “Likewise Christ was offered once.” Here the Apostle contrasts the repeated sacrifices of the Jews under the Old Covenant with Christ’s single sacrifice, which has brought salvation once and for all. These texts do not refer at all to the sacrifice of Mass. And, of course, Catholics fully subscribe to that teaching of St. Paul because we don’t say that the daily sacrifice in the Mass offers a new redemption. Further, the numerous sacrifices of the Jews cannot be compared to the Mass, for those sacrifices were only pre-images of the Cross-sacrifice. Holy Mass, however, was instituted by God to share with us the fruits of the Cross offering.

Christ is the Savior of the world and the Salvation of all men. Yet if the Catholic Church teaches that Mary is Immaculate, hence spotless, how then can Christ be Mary’s savior?

Many misunderstand the Catholic doctrine of Mary’s Immaculate Conception. This doctrine holds only in that Mary, because of her high election as Mother of God and by a special grace of God, has been freed from Original Sin. This is a longstanding view of the Roman Church which was solemnly declared an article of faith by Pope Pius IX in 1854 and proclaimed in the following terms: “We declare … that the doctrine which holds that the Most Blessed Virgin Mary in the first moment of her conception, by a special grace and a special privilege from Almighty God in view of the merits of Christ Jesus, the Savior of the human race, is kept free from all the stain of Original Sin, has been revealed by God.”

The solution to the accusation raised, namely that according to Catholic doctrine Mary would not need Christ to be her savior, is clearly set forth in the italicized words quoted above from Pius IX’s solemn declaration that Mary was indeed redeemed by God. In this very special sense, Mary was saved from Original Sin by God. As a descendant of Adam, Mary should have been stained with Original Sin, just like all other people who have ever lived.

And that is what God has done in view of the forward-working merits of Christ. Just as the righteous in the Old Covenant were also saved by the forward-working merits of Christ, so Mary was indeed redeemed by Christ, but again in a more sublime sense than we are. Her redemption consisted not of removing the Original Sin that was already there, but of preventing the contamination of sin. And that is why Mary rightly called God her “Savior” in the Magnificat.

The reason she was redeemed in such a special way was that she was chosen to be Christ’s mother. Meanwhile, the supernatural way in which Christ was born, namely from a virgin mother, has nothing to do with the Immaculate Conception of Mary. That is a completely different privilege of Mary.