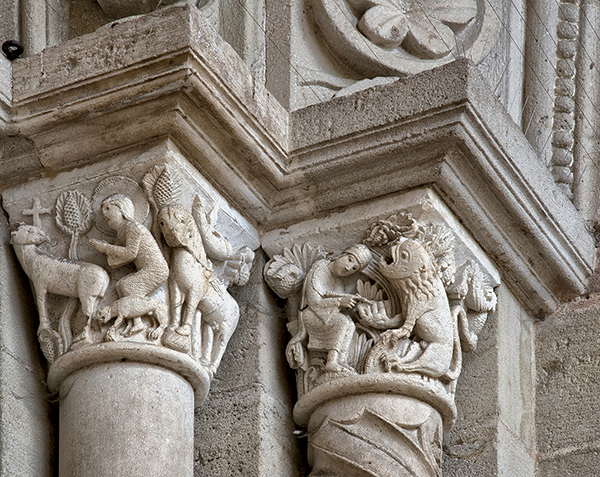 The Autun Cathedral is a magnificent display of Romanesque Art and Architecture. The sculptures created by Gislebertus successfully integrate biblical iconography relating to the New and Old Testaments with ease and amazing artistic ability. The size and quality of the tympanum of the Last Judgment, and the lintel of the Temptation of Eve are impressive and exquisitely detailed pieces of art.

The monument which can be admired today was not originally built as a cathedral. A cathedral had already been built not far away in the 5th century, right opposite the lateral doorway. This first cathedral was probably built in the form of a basilica, with round columns and an apse decorated with mosaics. Successive bishops took care of its maintenance and decoration. The cathedral was altered and reconstructed many times throughout the centuries until its ruinous state forced its demolition in the XVIIIth century. All that now remains is a fine archway and a 14th century chapel. The Monastery of Vézelay was established on land belonging to the diocese of Autun. Relics of Mary-Magdalen were venerated there.

Rapid Progress on a New Church

Progress was rapid when the new church was built. By 1146 the entire structure was finished with the exception of the porch which was added a few years later. From the cathedral square the visitor cannot really imagine being in front of a Roman church. The remarkable spire was built in the late 15th century, lightning having destroyed the original Roman tower of which no trace, not even a drawing, now remains. A Cardinal decided on the construction of the spire which has watched over the inhabitants of Autun for more than 500 years. The 14 chapels which line both sides of the nave were built in the 16th century. Viewed from the square only two traces of the building’s Roman origins can be seen: the small gallery under the roof of the nave and the west portal. Since 1766 the lateral doorway has been without a carved tympanum. It was in fact sold to a local builder who used it in the construction of houses throughout the town. The famous “Eve” was discovered in 1866, by chance, in the wall of a house in the main square of Autun. The two towers and the portico were built in the late 12th century, the towers being modified in the 13th century, and partially rebuilt in the 19th century on the model of the towers at Paray-le-Monial. The graceful fountain next to the cathedral dates partially from the 16th century. It is dedicated to St. Lazarus, patron saint of the church.

The imposing porch housing the tympanum of the Last Judgment is the most remarkable aspect of the entire cathedral. The works of the sculptor are characterized by their elegance, their distinction, and their sobriety. His works have been widely imitated throughout Burgundy, unfortunately not always successfully. One thing in particular, throughout the cathedral all the decorations bear his touch. This aesthetic unity of sculpture is rarely equaled outside Autun. The style of sculpture, idealized, deliberately contemptuous of anatomy, has not always been appreciated during the successive centuries. In 1766, the canons decided that the carvings were mediocre and childish, and had the tympanum filled with a layer of plaster, without realizing that, by doing so, they would preserve this work of art from vandalism during the revolutions. In 1837 another priest had the inspiration of scratching away the plaster: he found the original tympanum in a perfect state of conservation. Only the head of Christ was missing: being in relief, it had hindered the work of the plasterers, so they simply hacked it off. It was finally replaced in its original position in 1958. Description of the tympanum: on the right is depicted the “Resurrection of the Damned”; details to note are the two hands of the devil seizing a sinner by the throat, Impurity being symbolized by a female figure whose breasts are devoured by two serpents, and Avarice shown by a man whose fortune is hung from his neck. On the same lintel to the left are the Elect, far more numerous than the Damned. At the extreme left, two Bishops carrying their crooks make their way to Heaven. Towards the center are two pilgrims one of whom is from Compostela and wears a Saint James scallop-shell on his haversack. A giant figure of Christ in His Glory, flanked by four angels presides over the ultimate ceremony. To the right can be seen the weighing of souls with an elegant figure of Saint Michael applying his weight to one side of the scales so it will tip in the right direction despite the efforts of a devil to make it tip the other way. At the extreme right several devils accomplish their sinister task by plunging their victims into Hell. 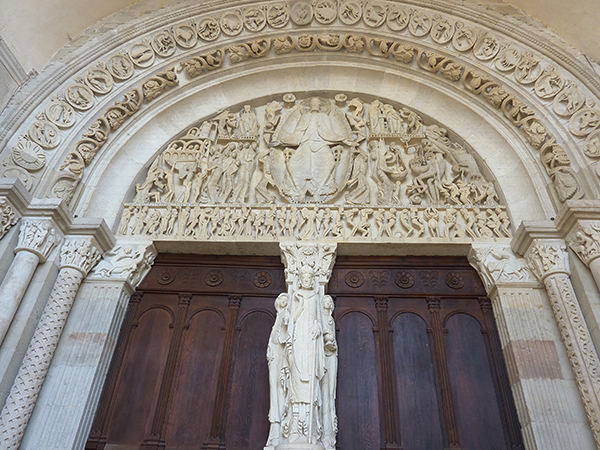 Above are the Apostle St. John, holding his Gospel, and his brother St. James, both sitting in the place of honor, on the other side of Christ, to the left. The other Apostles watch their Master, Christ, approvingly, all except Saint Peter who turns his back in order to control the entry into Heaven, depicted as a series of small arcades. Above the Apostles is seated the Mother of Christ, jointly presiding over this solemn ceremony. The medallions surrounding Christ depict, from the left, the first two of the four seasons, then the work of the twelve months of the year, and the signs of the Zodiac, beginning with the month of January, shown as a country man warming his feet whist cutting himself a slice of cake. He is visibly happy and judging by the size of the cake is well nourished. At the far right next to the last two seasons the last medallion shows the month of December, with the farmer armed with an axe, preparing to slaughter two large pigs, in preparation for the Christmas festivities. The eighth medallion toward the left shows the winegrower treading his grapes while eating a bunch. The three statues on the central pier date from the 19th century. They depict Saint Lazarus and his two sisters, Martha and Mary-Magdalen.

A surprise awaits the visitor on entering the cathedral. The shape of the vaulting and the fluting applied to the pillars are rather disconcerting. This fluting, and the triforia all round the interior are above the level of the arches. They are inspired simply by the decoration of some Roman structures which could be seen at that time. Some of these can still be admired. As for the vaulting, it should be stressed that it is by no means Gothic; there are no crossed diagonal ribs. It is merely an equilateral form of semi-circular Roman vaulting. This style of architecture prevented the vaulting from collapsing from the center and, in theory, enabled it to be far more solidly constructed. This type of vaulting was known as Burgundian Roman and spread throughout Europe and even to the Near and Middle East. Nonetheless the Burgundian architects were extremely careless. By wanting direct lighting of the nave, they built side aisles of very low elevation compared to the principal vaulting. Flying buttresses had not yet been invented, and so the side aisles acted as buttresses. As they were not tall enough, the vault was left to its own devices. The thrust not being transmitted through the center of the vault, it was applied laterally to the side walls which, being insufficiently protected gradually began to move outwards. Luckily it took a century to reach a dangerous degree. By that time, the technique of flying buttresses had been perfected, so by the mid-13th century they were added to stabilize the structure. Although lacking in elegance, they were efficient. In the 19th century, afraid of another relapse, it was decided to lighten the vaulting even further and so to this day it no longer represents a danger. The upper part of the choir was rebuilt in the 15th century, following the collapse of the Roman tower, struck by lightning. The upper windows date from the 19th century, and the stained glass windows of the two lower levels from 1939.

It is well worth touring the cathedral to admire the carved capitals, most of which are worthy of study.

After visiting the Cathedral, it is essential to visit the nearby Rolin Museum. There can be found amongst other exhibits the famous “Eve” from the lateral doorway, the remains of the tomb of Saint Lazarus, the Virgin of Autun, and the paintings by Maitre de Moulins showing Cardinal Rolin kneeling before the Virgin and Child. 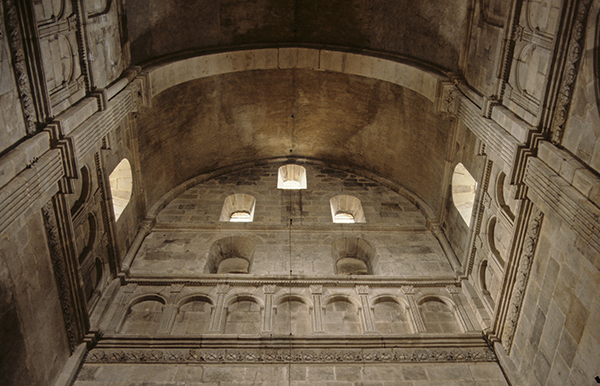