Faith and Civilization According to Archbishop Lefebvre

When the young Marcel Lefebvre, at 18 years old, entered the French Seminary in Rome, on via Santa Chiara, he was under the direction of priests who were members of a missionary congregation, the Congregation of the Holy Ghost, under the title of the Immaculate Heart of Mary. Right away he felt at ease, and gladly soaked in the spirit of the first founder, the Venerable Claude Poullard des Places (+1705). The priests, formed in a piety grounded in theological Faith, that is to say, pure Roman doctrine, often left, beginning in 1732, for the foreign missions in Canada, Indochina, and Senegal (1770).

In 1848, the Congregation, suffering from the decrease of its members due to the French Revolution, joined with the young society founded by Father Francis Liebermann, a converted Jew, to send missionaries to Africa.

Fr. Liebermann explains to one of his missionaries:

“This mission does not consist solely in the word of faith that we have to proclaim, but in the initiation of peoples into our European civilization. Thus, the faith, the mold of Christians, on one hand, and the instruction, the knowledge of agriculture and mechanical arts, on the other, will lend a mutual support and will propagate and perfect each other […] leading the African people to take part in the benefits of Christianity, according to the customs and the civilization of the European people” (Letter of October 19, 1846).

We have underlined the idealistic words of the second founder, so strange as the Christian civilization in Europe is almost moribund in 1846. Certainly during this time the Church is full of charity and missionary zeal; however society, the “City,” is radically atheistic, destroyed by the secular ideology of the Freemasons who are in power in nearly all of the European countries. Which civilization will missionaries be able to import to Africa?

Well, a year later, the same Francis Liebermann seems to have sanctified his idealism and passed to an outlandish realism:

“Despoil yourself of Europe,” he writes to the same missionary in Dakar. “Detach yourself from its customs, from its spirit; become African with the natives, and you will judge them as they ought to be judged; become a native with the Africans in order to form them as they ought to be, not in the manner of Europe, but leave them what is theirs; be to them like servants ought to be to their masters, as to the customs, the genres, and the habits of their masters” (Letter of November 19, 1947).

Fr. Pierre Blanchard explains that, by writing in 1947 to his missionaries, the founder reveals his definitive conception—we should say matured—of one of the conditions: psychological, social, spiritual, of evangelization, a condition that he judges more important than the promotion of a given type of civilization brought to them. Thus, Europe ought to safeguard the “values,” that is to say, the virtues and proper principles of what we ought to call the “African civilization.” 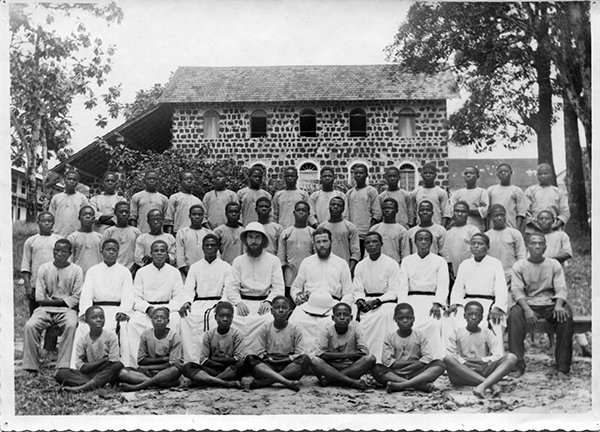 Years of Formation for Marcel Lefebvre

Without needing to experience such a conversion, Marcel Lefebvre, from his seminary years, learned from his dear teachers, Frs. Henri Le Floch and Joseph Voegtli, that there is no other true civilization than the Christian civilization. It is very simple: the history of the Church for two centuries (1715-1925) is but one battle carried out especially by the Popes against Liberalism, Socialism, and Modernism.

“It is Fr. Le Floch who truly made us understand this battle waged by the Popes with an absolute continuity, so as to try to preserve the world and the Church from these calamities which oppress us today. This was a revelation for us.”

These “calamities” are the City (the State) without God, atheistic, the free exercise of false religions in the State; economic liberalism which produces a miserable proletarian people, victims of the greed of the bourgeoisie class; and conversely a state interventionism which confiscates all the initiatives of individuals and intermediary bodies.

The teachings of Popes Gregory XVI, Pius IX, Leo XIII, St. Pius X, and Pius XI outline these errors with a remarkable continuity, which adds authority to their teaching.

During this time (1925-1930), the Holy Roman See was at the forefront of the struggle for the reconstruction of a healthy society, of a true civilization. This is what the priests and the missionaries were to teach and inculcate to the Catholic laity, namely the social reign of Our Lord Jesus Christ. Only Christ can, through His grace, heal the triple concupiscence of the soul derived from original sin, namely, the concupiscence of the eyes (greed), the concupiscence of the flesh (lust) and the pride of life (ambition). Likewise, only Christ can elevate souls to an amicable, peaceful, and charitable conception of society. Marcel Lefebvre retained this lesson and made it one of the goals of his priestly life: “I always wanted to construct—to help construct—Catholic societies.”

As a new missionary in Gabon in 1932, assigned to the Libreville Seminary, Father Marcel Lefebvre formed his future priests with this integral concept of Christian civilization, conforming to the teaching of Pope St. Pius X to the French Bishops in his letter on “Le Sillon” :

“No, venerable Brothers, there is not true fraternity outside of Christian charity … If we wish to arrive…at the highest possible sum of well-being possible for society and for each of its members, … the union of minds in the truth is necessary, the union of wills in morals, the union of hearts in the love of God and of His Son Jesus Christ. This union is not realizable except through Catholic Charity, which alone is able to lead the people of the world in progress towards the ideal of civilization.

“No, … we will not build the city other than God builds it; we will not edify society if the Church does not lay the foundations and direct the work; no, civilization is not to be invented, nor the new city to be built[.] She always has been and is; it is Christian civilization and the Catholic City. All we have to do is establish and restore it without ceasing, upon the natural and divine foundations, against the reviving attacks of the unhealthy utopia, of revolt and of impiety: Omnia instaurare in Christo—To restore all things in Christ.”

In his Priestly Jubilee sermon at Paris on September 23, 1979, Msgr. Lefebvre described the social conversion obtained in Gabon in the villages of the country by the Sacrament of Baptism, that of Marriage, and the public Christian life that was established there by the work of the missionaries, of whom he himself is one of the most active between 1938-1945:

“This Christian civilization, which penetrated these more recently pagan countries, transformed them. The populations have wished to give themselves Catholic leaders. I was able myself to assist with these changes and know personally leaders of these Catholic countries. The Catholic people desired to have Catholic leaders so that they may also submit their government and all their country’s laws to those of Our Lord Jesus Christ, to the Ten Commandments.

This is substantially what Msgr. Lefebvre, Apostolic delegate in French Africa, said to Pius XII during the audiences that this Pope granted him:

“Most Holy Father, certainly, our Catholic schools give to non-Catholics, to Muslims in particular, an esteem of Catholicism, of the Church, since we receive up to 15% of Muslim students in Senegal for example. But the goal, the end of our Catholic school is to form a true Catholic elite for these young future independent countries, in order that Catholic leaders govern them. Isn’t this the fullness of the Church’s mission, let’s be frank, which is not solely religious, but also formative of all virtues, including the social and political virtues?”

In the same sermon of 1979, the Archbishop insists on the socio-political subject of his mission, that is to say its Catholic nature, essentially Catholic, of the civilization that the missionaries ought to bring and plant in the pagan countries.

“And there, I’ve seen, yes, I’ve seen what the grace of the Holy Mass can accomplish, I have seen it in the holy souls of some of our Catechists. Pagan souls were transformed by the grace of Baptism, transformed by the assistance at the Eucharistic Sacrifice and by Holy Communion. These souls understood the mystery of the Sacrifice of the Cross and united themselves to Our Lord Jesus Christ in the offering of His Cross; they offered their sacrifices and their suffering with Our Lord and lived as Christians. I can provide names: Paul Ossima, of Ndjolé, Eugene N’dong of Lambaréné, Marcel Mebale of Donghila. And I shall continue with a name from Senegal, Mr. Forster, Treasurer in Senegal, chosen by his co-workers for this delicate and important function because of his honesty, because of his integrity. … I have been able to see these villages become Christian, transform themselves, not only I will say, spiritually and supernaturally, but transform themselves physically, socially, economically, politically, because these pagan people that they were became conscious of the necessity to accomplish their duty, despite trials and sacrifices; to keep their engagements, and in particular the commitment of marriage. And then the villages transformed themselves little by little under the influence of grace, of the grace of the Holy Sacrifice of the Mass, and all the villages wanted to have their own chapel, the visit of the priest, missionaries! They were awaited for with impatience in order to be able to assist at Holy Mass, to be able to confess and receive Holy Communion afterwards. Souls were thus consecrated to God, Brothers, Sisters, Priests, gave themselves to God, consecrated themselves to God. Here are the fruits of the Holy Mass!”

This is Christian civilization: budding, flourishing, fructifying: fruit of the preaching of the faith and fruit of sanctifying grace, of the virtue of Charity. Having seen this during 30 years in Gabon and 13 in Senegal, having himself planted this Catholic faith and engrafted this sanctifying grace, what could Msgr. Lefebvre conclude, if not the full truth and the integral end of true civilization alone!

“Omni instaurare in Christo. To restore all things in Christ,” souls and political societies, family life and economic life, the interior life and the public life!