Nihilism and Belief in Shakespeare’s Hamlet

As he often said in his classes and conferences, Professor David Allen White pointed to the ideas in Shakespeare’s Hamlet as the beginning of the modern world. Written around 1600, the play dramatizes the conflict between the richly Catholic culture of the Middle Ages and the rising individualism of the early modern age, a major shift in the worldview of Western Civilization whose effects remain even in our late post-modern times. A useful image of this shift comes from the philosopher Eric Voegelin who noted that modern man has moved from considering himself as a link in a hierarchical chain that comes from God to being himself the center of the universe and of all meaning—a “macroanthropic” view in Voegelin’s terms. It is noteworthy that the Renaissance humanists resurrected the sophist Protagoras’ phrase, “Man is the measure of all things.” Central to the action of Hamlet is a corrosive doubt in the old certainties that leaves the black-suited prince to find all meaning via himself, relying on his own mind and melancholia to act within the rotten state of Denmark. Although a tragedy that ends with multiple deaths, over the course of the plot Shakespeare provides an answer and resolution to Hamlet’s doubts and resulting anguish, an answer that provides a foundation for restoration and one of the great contributions to the perennial tradition. 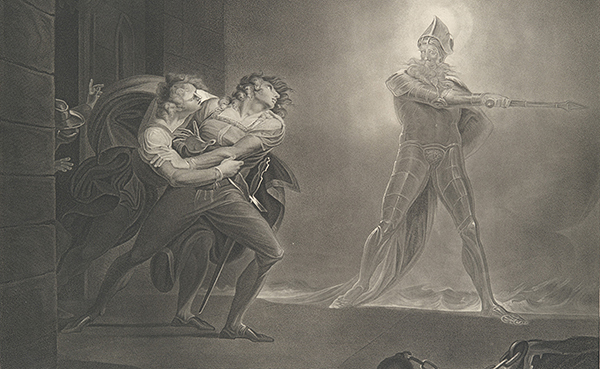 A quick but telling moment in 2.2 identifies the central problem in this early modern man. In trying to explain Hamlet’s odd behavior earlier in the play, the court advisor Polonius reads to the king and queen a love letter Hamlet sent to his daughter Ophelia. Written before the play begins and while he was still studying at the University of Wittenberg—famous as the place where Luther produced his 95 Theses and so more or less the birthplace of Protestantism—Hamlet’s letter expresses the corrosive doubts that were swirling around the early modern culture:

Doubt [i.e., suspect] thou the stars are fire,
Doubt that the sun doth move,
Doubt [i.e., suspect] truth to be a liar,
But never doubt I love.
O dear Ophelia, I am ill at these numbers [i.e., verses]. I have not art to reckon my groans. But that I love thee best, O most best, believe it. Adieu.
Thine evermore, most dear lady,
whilst this machine is to him.
Hamlet

It is interesting that the first two verses of the poem involve doubt about the traditional view of the universe: thinking that the stars are fire means that they are not made of celestial matter as was thought; doubting that the sun moves indicates belief in a heliocentric universe as opposed to the Ptolemaic geocentric model. More important is how the point is universalized in the third verse: Ophelia is to suspect that truth itself is false. This muddled young man can only be sure of one thing: his personal, inward feeling of love for Ophelia. The corrosive acid of doubt has eroded everything but emotion, and the subsequent plot shows that feelings, even passionately expressed, can change. Waves of melancholia—Hamlet is what we would today call clinically depressed—mixed with uncertainty, anguish, and perhaps madness overwhelm the prince; he tumbles into the abyss of nihilism, rejecting nearly everyone and everything close to him, including Ophelia herself in a terrible scene right after the famous “To be, or not to be” speech.

After four acts of confusion, angst, madness, and even murder, the final act begins where the whole play has been tending: a graveyard. 5.1 is the most important scene in modern drama; it not only recapitulates the theme of nihilism but also provides an answer to it. Now back in Denmark after providentially surviving an assassination attempt, Hamlet, with his friend Horatio, comes upon two men digging a grave. Since graves were reused due to a lack of space, the gravedigger and his assistant are moving various bones aside as he prepares the plot. The dialogue begins with comic banter between the gravediggers and then Hamlet himself; comedy reminds man of his human nature, it is a bringing down to earth, and so is in an important way appropriate for a scene featuring the end of all men. The gravedigger asks Hamlet to identify a particular skull, but because death is the great leveler, Hamlet is unable to. Finally, the gravedigger says the skull is that of the old court jester, Yorick. What follows is one of the most iconic moments in drama: Hamlet holds the skull of a comedian, “a fellow of infinite jest, of most excellent fancy,” who once produced “flashes of merriment that were wont to set the table on a roar.” None of this matters, though, because everything moves to dissolution, to dust. Hamlet tells the skull to go to “my lady’s chamber and tell her” that even if she puts on cosmetics that are an inch thick, she will also ultimately become a skull. For Hamlet in the nihilistic abyss, there is no real significance: Yorick, a beautiful lady, Alexander the Great, “Imperious Caesar, dead and turned to clay,” all just become stinking skulls rotting in the earth. Immediately after these moments which anticipate atheistic twentieth-century drama, Ophelia’s funeral procession arrives; while Hamlet is away, the virtuous young lady goes insane and is drowned. Images of beauty come to the nihilistic graveyard: Ophelia’s “fair and unpolluted flesh” and violets that are symbols of chastity and faithfulness. Hamlet, shocked, comes forward and makes a vital announcement:

This is I,
Hamlet the Dane. …
I loved Ophelia. Forty thousand brothers
Could not with all their quantity of love
Make up my sum.

In the abyss of the grave, when someone close to him has died, Hamlet does not find meaninglessness; he finds the most powerful force in the universe: love. With meaning reaffirmed, Hamlet can again be a complete person—hence he gives his name and royal title as he steps forward—but it is a significant part of the tragedy that this only happens after Ophelia’s death. In Charles Boyce’s words, only after she is destroyed during the tragic plot can the hero perceive “what he has lost through his mistaken vision of the world.” With his own death near, in the next scene, the last of the play, Hamlet continuously expresses his belief in the old order. He tells Horatio that “There’s a divinity that shapes our ends, / Rough-hew them how we will,” that “There is special providence in the fall of a sparrow,” and, in a clear answer to the most famous speech in the play, “The readiness is all. … Let be.” This is the painfully acquired knowledge that is a hallmark of high tragedy.

In The Death of Christian Culture, John Senior writes that “Literature is the ox of culture, its beast of burden.” In literature, the ideas and values of a culture are often conveyed vicariously as the reader lives the story along with the characters. Hamlet’s conflict becomes our conflict, as Dante’s pilgrimage is ours and Odysseus’ voyage is ours. In this way the great authors are not just “the abstract and brief chronicles of the time” but the architects of civilization itself. To quote Senior again:

“Culture, as in ‘agriculture,’ is the cultivation of the soul from which men grow. To determine proper methods, we must have a clear idea of the crop. ‘What is man?’ the Penny Catechism asks, and answers: ‘A creature made in the image and likeness of God, to know, love, and serve Him.’ Culture, therefore, clearly has this simple end, no matter how complex or difficult the means.”