When one seeks to determine the character of Dominican spirituality, one is struck by the multiplicity of the elements that it involves and by its superior simplicity which is hard to define. The different principles that constitute it, considered separately, seem hard to reconcile, their union remains mysterious and only reveals itself gradually to the souls called to follow this way (p. 71).

Fr. Clérissac in his book L’Esprit de saint Dominique also insists on this complexity: In the life of our Order, one distinguishes clearly three principal characteristics. First of all, its complexity. Our friends praise our simplicity. I agree; but I add that Dominican life corresponds to an extremely complex concept and that one must have lived it for several years in order to begin to discover its so beautiful and so simple unity in which are melded all the elements of which it is composed (pp. 1-2)﻿.

Fr. Garrigou-Lagrange goes on to list these different elements which seem to contradict each other but which, nevertheless, are all integral parts of Dominican spirituality. On the one hand, there is the insistence on the fact that grace does not destroy nature, but perfects it, to the point that the doctrine of the great Dominican doctor St. Thomas Aquinas, which the Order has made its own, was accused of naturalism by his adversaries. At the same time, however, there is no doctrine more opposed to Pelagianism—a 4th-century heresy which denied the necessity of grace—than that of St. Thomas, which insists so much on the absolute necessity and efficacity of grace that its opponents assimilate it to that of Jean Calvin. For indeed, according to St. Thomas, it is not only impossible to merit the supernatural life of grace by natural acts, but one cannot even dispose oneself to receive it without a gratuitous help of an actual grace.

With regard to the life of grace itself, St. Thomas teaches, on the one hand, that grace is not rendered efficacious by man’s free will but is efficacious by itself: and yet, at the same time, he insists very much on the necessity of the exercise of the virtues, carefully enumerating and explaining them one by one in the Second Part of the Summa, which constitutes a long ascetical treatise of the path one must follow to attain union with God.

Finally, whereas some Orders dedicate themselves exclusively to the contemplative life, and others to the active life, Dominican life claims to unite the two, and to unite them in their highest perfection. For the active life to which Dominicans devote themselves consists in the highest of all actions, the preaching of the Word of God, imitating in this the apostles, who, leaving to others the lesser activities, consecrated themselves completely, as St. Peter says “to prayer and to the ministry of the word” (Acts 6:4). However, as these words of the Chief of the apostles show, to be able to preach, Dominicans must first of all lead the contemplative life of prayer, for their preaching must flow directly from their contemplation and union with God, according to the famous maxim of St. Thomas: “Contemplate and give to others what one has contemplated.” This apostolic life, says St. Thomas, is superior to the pure contemplative life, for it requires more illumination to shine and illuminate others than to simply shine within oneself. 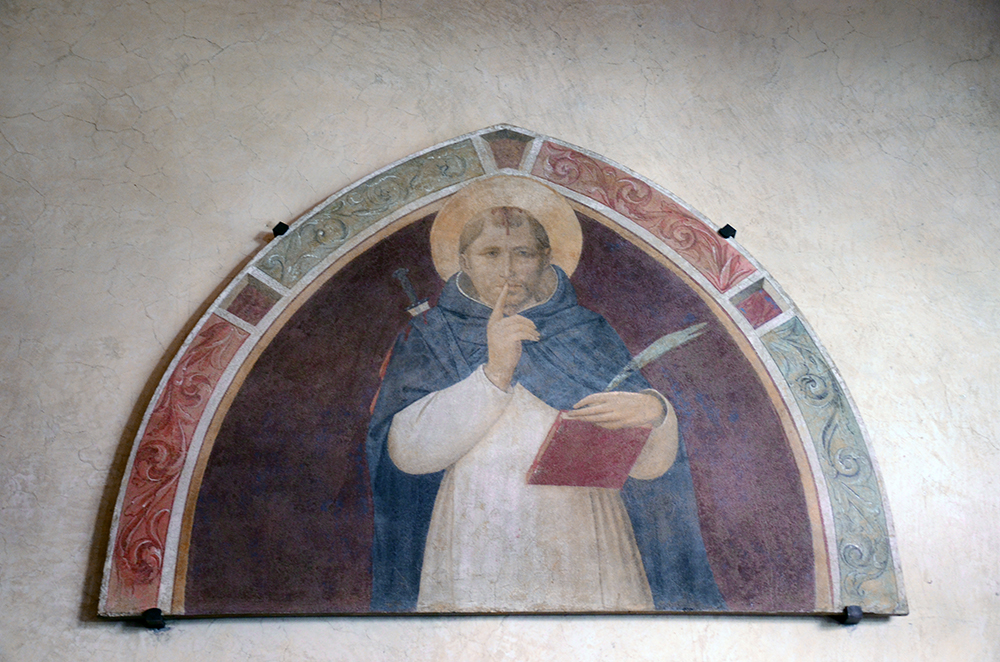 Fr. Garrigou-Lagrange explains that all these apparently opposed elements are reconciled in a synthesis which unites them from above.

The apparent contradictions are resolved by the equilibrium established when their terms are pushed to their highest degree. It is at the summit where their harmony takes place. This is why Dominican spirituality tends towards a very elevated synthesis which embraces in one view the most varied aspects of Christian life and thus sees how they are united in their common principle and their last end (p. 76).

This is what accounts for the perfect harmony of so many diverse elements in Dominican life, as he goes on to explain.

In such a life there is no dualism or opposition between liturgical piety and monastic observances on the one hand, and study and apostolate on the other. Everything harmonizes, as long as one clearly sees that the liturgical cult and the austerity of the monastic observances are ordered, just like study, to this divine contemplation, which is itself ordered to a greater charity, which must overflow on souls by giving them the light of life in order to lead them to God (pp. 80-81).

This synthesis is the source of three principles that must direct Dominican spirituality:

1. Nature must not be destroyed but rather perfected by grace.

Nature is taken here in the abstract sense of the ideal of human nature as conceived originally in the mind of God and not as it exists today after the fall of Adam. Far from leading to a rejection of the traditional doctrine of the necessity of mortification and asceticism, this appreciation of the fundamental goodness of human nature itself leads to a greater appreciation of the corruption caused in concrete human nature by original sin and the importance of the remedies that must heal it.

There is no disagreement, therefore, between St. Thomas and the author of the Imitation of Christ or the other great mystics. On the contrary, having a very precise idea of the essence, of the immutable properties, the strengths and the last end of human nature, St. Thomas sees better all that concretely deforms it, all that is disordered in it, as a result of sin and the inclination to sin, that must not only be moderated, but mortified and extirpated by penance, which truly belongs to the essence of Christianity as does the sacrament thus named. This work of restoring and healing is always viewed by St. Thomas from the point of view of the first cause and the last end, and thus he declares it absolutely impossible in the present state of human nature without grace, of which the two principal functions are to heal nature and elevate it supernaturally (gratia sanans et elevans). The Angelic Doctor goes very far with regard to the necessity of this healing grace : without it the equilibrium of even our natural moral life, troubled by original sin, cannot be reestablished (pp. 86-87).

2. A very elevated conception of the supernatural order.

In spite of this genuine appreciation of natural good, for Dominican spirituality there is no proportion between it and the supernatural order of grace.

There can be no comparison between created nature, no matter how perfect, and the divine nature, of which grace is a real and formal participation. “The grace of one soul is worth more than the natural good of the whole universe” (I-II, q. 113, a. 9, ad 2), more than all created or creatable angelic natures taken together (…) There is in our nature, as in that of the angels, just a mere capacity to be elevated to this life that is entirely divine; this purely passive aptitude is not any greater in the most powerful angelical intelligence than in the soul of a poor Christian woman without any education (pp. 89-90).

This fact has very considerable consequences in the spiritual life, in particular in the exercise of the theological virtues which are at its heart.

This shows also the infinite superiority of the three theological virtues over the natural knowledge and love of God, and also over the natural knowledge of miracles and other signs of Revelation. Our act of infused faith is not a natural act clothed with a supernatural modality, like copper overlaid with gold. It is essentially supernatural in its foundation, its immediate formal motive is nothing other than revealing divine truth; consequently it is infinitely superior to the natural act of faith of demons, based on the natural evidence of miracles (…) The supernatural essence of grace of the virtues and the gifts of the Holy Ghost is incomparably more elevated than that of miracles and the exterior manifestations of the mystical life (pp. 90-91).

3. More insistence on the efficacity of divine grace, to be obtained by prayer, than on the human effort of the will.

Here is found the practical consequence of the Thomistic doctrine on the efficacity of grace by itself : since God is the first cause of all spiritual life, its ascetical and mystical stages are distinguished (since the first is more active and the second more passive) but not separate, because even in the ascetical stage, God is the one who must move us.

Everything in our free salutary acts comes at the same time from God and from us, from God first, from us after. This is already the case in the ascetical order of the most ordinary exercise of the virtues ; mystical life thus appears as the normal crowning of spirituality (pp. 93-95).

The opposing doctrine, which teaches that grace is made efficacious by our will, leads to the idea that the mystical life is something extraordinary (and therefore of which one must be wary) since it involves a strange passivity which one can safely avoid by remaining in the ascetical way.

If, on the contrary, everything in our free salutary acts does not come from God, if our free determination and our cooperation is added, as something exclusively ours, to the attraction that Our Lord exercises upon us, then we look above all at ourselves, and the mystical life with the special passivity that characterizes it, no longer appears as the normal crowning of the interior life, but rather as something completely extraordinary, outside of the normal path of sanctification (p. 95).

This all finally leads to the Dominican conception of the relation between contemplation and apostolate. Since contemplation is a normal part of Christian perfection, it is also a necessary element of the apostolate, which is its natural fruit: if one loves God by contemplation, one naturally seeks to share Him with one’s neighbor. Thus apostolate is not the end of contemplation (one does not contemplate so that one can do apostolate) but rather its fruit.

If faithfulness to the Holy Ghost must normally lead to the living waters of prayer, what must one say about the relation between contemplation and apostolate? Does the intensity of the former require the sacrifice of the latter, and can this latter hope to find its nourishment in the warm and living light of the former?

Dominican spirituality responds with St. Thomas: the teaching of sacred doctrine and preaching must derive from the plenitude of contemplation (…) Contemplation is not ordered to apostolic activity, like study done hurriedly with a view to preaching a sermon; rather it produces it as an eminent and superabundant cause. (…) Thus St. Thomas considers the active life and the purely contemplative life as less perfect than the apostolic life which unites the two and has as its end contemplation bearing fruit by apostolate. Like Jesus Christ and the Twelve, the apostle must be a contemplative who gives to others his contemplation in order to save and sanctify them. Contemplari et contemplata aliis tradere (II-II, q. 188, a. 6), these are the words of St. Thomas which have become the motto of the Order (pp. 99-101).