The Catholic Church and Science

Myths abound about the anti-science stance of the Catholic Church and the supposed conflict between faith and reason. These myths stem from enemies of the Church who desire to depict Catholicism as a religion of bigots manipulating the masses by keeping them chained with the fetters of ignorance. This mythology also comes from a misunderstanding on the part of many non-Catholics who do not comprehend certain historical events and fail to discover the truth by proper research. Misconceptions, however, exist among Catholics as well. According to a 2014 survey by the Public Religion Research Institute and the American Academy of Religion, 51% of American Catholics believe that “religion and science are often in conflict.” When famous scientists, such as Carl Sagan, Neil DeGrasse Tyson, Stephen Hawking, influential writers, and historical figures, including Bertrand Russell and Thomas Jefferson repeat the myths, people tend to listen. In addition, students find misrepresentations of the truth in certain science textbooks, “educational” websites like history.com and pbs.org, and some university materials. Bombarded by error from supposedly reputable sources, many unsurprisingly remain ignorant of the truth.

The legend of Pope Callixtus III issuing a papal bull against Halley’s Comet in 1456 presents one of the more striking and preposterous myths of anti-science in the Church. According to various writers, beginning with the French astronomer and mathematician Pierre-Simon Laplace, Callixtus III excommunicated, exorcised, and anathematized the comet in an attempt to expel it from the sky. John W. Draper, the first president of the American Chemical Society and a founder of the New York University School of Medicine, took the story and embellished it with even more absurd details, such as the ordering of prayers by the faithful and the ringing of church bells all over Europe to scare the comet away. Of course, no reliable sources exist to corroborate the legend, yet Draper’s rendition in his book The History of the Conflict between Religion and Science gained widespread readership as it appeared in several languages. Sadly, many people, even some of the better educated, believe such drivel when men of letters irresponsibly promote legends without basing them on historical fact.

The most famous set of myths stems from the Galileo episode. In 1633, the Holy Office, or Inquisition, sentenced the Italian astronomer and physicist Galileo Galilei to permanent house arrest for vehement suspicion of heresy based on his defense of the Copernican view of the universe, commonly called heliocentrism, the idea that the earth revolves around the sun. The myths range from Galileo being convicted of heresy and imprisoned in a dungeon to being burned at the stake. However, Galileo never suffered any of these punishments. The Holy Office never accused Galileo of heresy nor burned him at the stake. For his house arrest, during the next nine years until he died in 1642, he resided in the countryside surrounding Florence at his own villa, the Villa Il Gioiello, called “The Jewel,” because of its beautiful view. Here Galileo enjoyed full use of his books and instruments as well as the spacious wine cellar while working on his scientific projects and writings. The Inquisition merely required that he not publish any of his works.

As for the condemnation of Galileo for his adherence to the views of Copernicus, the inquisitors saw heliocentrism as inconsistent with a literal interpretation of certain passages of the Bible, such as Josue 10:12-14, which states that the sun and moon stood still. The situation of the time, in the midst of the Thirty Years War, with its political and religious ramifications, the friendship of Pope Urban VIII with Galileo, the support and opposition of various scientists and theologians, made the whole episode quite complex and more than a simple trial for suspicion of heresy. Regardless of the decision of the inquisitors, the Galileo affair does not display an anti-science view by the Church, but rather a deep interest in the philosophical and cosmological repercussions of scientific theories and discoveries. Many cardinals of the 17th century became patrons of men like Galileo, procured his telescopes, and read and discussed the latest scientific ideas.

Throughout the history of the Catholic Church, members of both the clergy and the laity have exhibited great zeal for learning, not only in theology and philosophy, but also in the natural sciences. During the late Roman Empire and the early Middle Ages, Benedictine monks saved and copied ancient manuscripts, including the works of the mathematician and astronomer Pythagoras, the naturalist Pliny the Elder, and the astronomer and geologist Ptolemy. When the West regained access to the works of Aristotle, not only his philosophical treatises but also his writings on physics and animals intrigued the medieval scholars. Long before the Galileo episode, Pope Sylvester II (946-1003) promoted the learning of mathematics and astronomy. St. Albert the Great (1206-1280), a Dominican and the patron saint of natural sciences, wrote works on physics and biology. The Franciscan Roger Bacon (1214-1294) studied optics and nature through empiricism, helping to develop the scientific method. Hundreds of other monks and priests contributed to scientific progress through their studies and discoveries, including Francesco Maria Grimaldi (1618-1683), a Jesuit who discovered the diffraction of light, Bl. Nicholas Steno (1638-1686), after whom the Stensen duct and other parts of the human body were named, and Gregor Mendel (1822-1884), an Augustinian monk who became known as the Father of Genetics. According to a 19th-century German source, Catholic clergymen comprised almost 10% of the natural scientist population. These men did not act in opposition to the Church, but rather with her full support. As the American historian of science J. L. Heilbron said, the “Roman Catholic Church gave more financial aid and social support to the study of astronomy over six centuries, from the recovery of ancient learning during the late Middle Ages into the Enlightenment, than any other, and probably, all other institutions.” This statement applies to the other scientific fields as well. 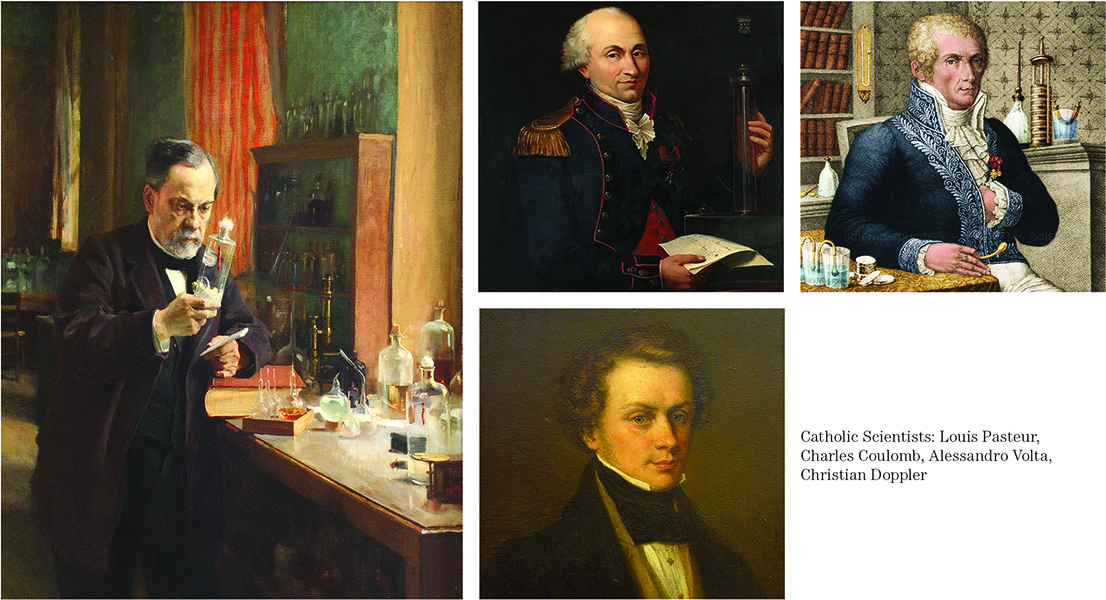 The catalog of lay Catholic scientists also includes many famous names: Georgius Agricola (1494-1555), the Father of Mineralogy; the aforementioned Galileo Galilei (1564-1642); Charles-Augustin de Coulomb (1736-1806), the physicist who discovered Coulomb’s law of the attraction and repulsion of electrostatic force and for whom the unit of electric charge was named; Antoine Lavoisier (1743-1794), the Father of Modern Chemistry; Alessandro Volta (1745-1827), the inventor of the electric battery, in whose honor the unit of electric potential was called the volt; Andre-Marie Ampere (1775-1836), a founder of the science of classical electromagnetism, the inventor of the solenoid and electric telegraph, and the physicist after whom the ampere unit of measurement is named; Christian Doppler (1803-1853), the physicist who discovered the Doppler effect involving change in wave frequency; Louis Braille (1809-1852), the inventor of braille, the system of reading and writing for the blind; Louis Pasteur (1822-1895), the Father of Bacteriology and discoverer of pasteurization; Alois Alzheimer (1864-1915), the psychiatrist known for identifying Alzheimer’s disease. The list could continue with hundreds of other names. Clearly, considering the number of renowned Catholic scientists, the accusation of anti-intellectualism against the Church cannot be founded on truth.

The First Vatican Council stated the Catholic Church’s view on natural science and its relationship to faith:

“Faith and reason are of mutual help to each other: by reason, well applied, the foundations of faith are established, and, in the light of faith, the science of divinity is built up. Faith, on the other hand frees and preserves reason from error and enriches it with knowledge. The Church, therefore, far from hindering the pursuit of arts and sciences, fosters and promotes them in many ways. ...Nor does she prevent sciences, each in its sphere, from making use of their own principles and methods. Yet, while acknowledging the freedom due to them, she tries to preserve them from falling into errors contrary to divine doctrine, and from overstepping their own boundaries and throwing into confusion matters that belong to the domain of faith. The doctrine of faith which God has revealed is not placed before the human mind for further elaboration, like a philosophical system; it is a divine deposit, handed over to the spouse of Christ, to be faithfully guarded and infallibly declared. Hence, the meaning once given to a sacred dogma by holy mother Church is to be maintained forever and not to be departed from under pretext of more profound understanding. Let knowledge, science, and wisdom grow with the course of times and centuries, in individuals as well as in the community, in each man as in the whole Church, but in the proper manner, i.e., in the same dogma, in the same meaning, in the same understanding.”

Catholic scientists who uphold this view show that there should be no conflict between faith and reason and that Catholicism has no anti-science stance. As all science in the true sense of the word, which means knowledge, both supernatural and natural, comes from God, there can exist no opposition or contradiction. St. Giuseppe Moscati, one of the first physicians to use insulin in the treatment of diabetes, said, “Only one science is unshakeable and unshaken, the one revealed by God, the science of the hereafter! In all your works, look to Heaven, to the eternity of life and of the soul, and orient yourself then much differently from the way that merely human considerations might suggest, and your activity will be inspired for the good.” Catholics who adhere to this advice cannot help but continue to make advances in natural science while proving the true position of the Catholic Church.