Paintings of the Crucifixion

Few ever have understood the power of touching God so well as that woman afflicted for twelve years by an issue of blood, who touched the hem of His garment and was made whole. This woman, called St. Veronica, is an important figure in the history of sacred art. Early ecclesiastical historians attest that she erected a statue in Paneas commemorating the miraculous cure. Eusebius of Cesarea recounted:

“There stood on a lofty stone at the gates of her house a bronze figure of a woman, bending on her knee and stretching forth her hands like a suppliant, while opposite to this there was another of the same material, an upright figure of a man, clothed in comely fashion in a double cloak and stretching out his hand to the woman.... This statue, they said, bore the likeness of the Lord Jesus. And it was in existence even to our day, so that we saw it with our own eyes when we stayed in the city” (Eusebius, The Ecclesiatical History. Translated by J.E.L. Oulton. Harvard University Press, 1932).

The statue was mutilated during the reign of Julian the Apostate; the whereabouts of its remains are unknown.

Veronica means “true image”. The name is shared with another woman who touched God. This St. Veronica pressed a cloth to the face of Christ as he walked to Calvary; a true image was left upon it. Even though monumental sculpture fell out of practice in the Catholic Church until the early Gothic era, and even though printmaking did not flourish as a sacred art until the late Middle Ages, both forms of art were present at the very beginning of Christianity!

As was painting: numerous works are attributed to the Evangelist Luke, including ones still venerated in Rome, Smolensk and Czestochowa. Now analysis of the materials in such paintings does not always indicate a first-century origin. However, it certainly is plausible that images venerated today are copies of a Lucan original, or copies of copies. The conviction of the faithful in patristic and medieval times was that Christian art is as old as the Church. This conviction does not depend on any specific painting’s authenticity.

I sometimes say that I am a Spirit of Nicea II Catholic. That is a joke, but its point is that I keep that ecumenical council at the forefront of my mind, living as I do in a time similar to the iconoclastic crises. I do not seek to interpret its doctrine regarding art and tradition beyond what its words actually say; what they actually say is bold enough. Its dogmatic decree states:

“Those, therefore who dare to think or teach otherwise, or as wicked heretics to spurn the traditions of the Church and to invent some novelty, or else to reject some of those things which the Church has received (the Book of the Gospels, or the image of the cross, or the pictorial icons, or the holy relics of a martyr), or evilly and sharply to devise anything subversive of the lawful traditions of the Catholic Church ... if they be bishops or clerics, we command that they be deposed; if religious or laics, that they be cut off from communion” (Second Council of Nicea, Nicene and Post-Nicene Fathers, Second Series, Volume XIV. Translated by Henry Percival. Buffalo, NY: Christian Literature Publishing, 1900). 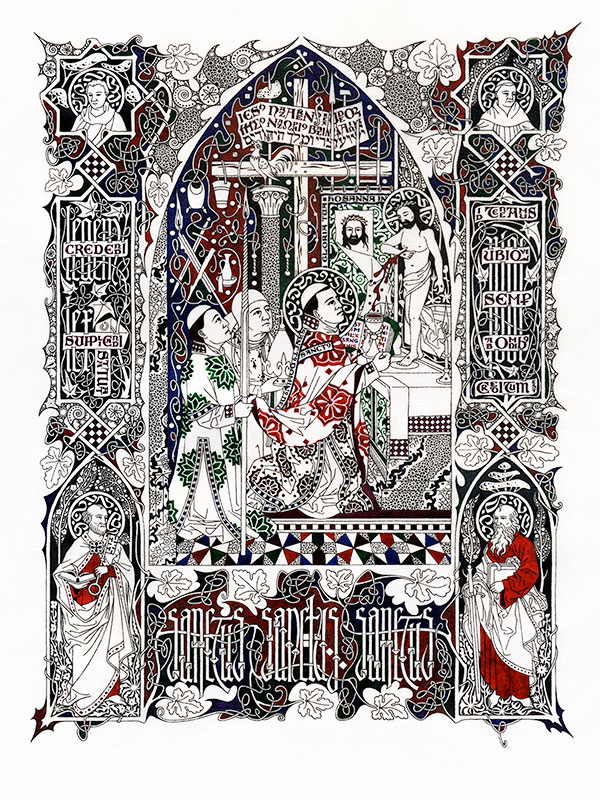 I do not think that anyone can honestly interpret those words that refer to the image of the cross, or the pictorial icons, or the holy relics of a martyr in an abstract sense. They refer to cults of devotion, to traditions that exist in fact. These may not be inerrant or infallible, but they nonetheless have a permanent content that endures through the centuries.

This recent drawing of mine depicts a miraculous vision of Christ surrounded by the instruments of His Passion, a vision which St. Gregory the Great saw while celebrating Mass. More broadly, the drawing is about Christian knowledge: how and whence it is received.

St. Gregory was the Bishop of Rome, and thus the inheritor of the authority of Saints Peter and Paul (whom I drew in the bottom corners). He was the codifier of the Roman Mass and its music (which is why I wrote the words Sanctus Sanctus Sanctus in the bas-de-page, together with the chant neumes from the Missa Kyrie Fons Bonitatis). Shown here, he is the recipient of a mystical vision, one of those divine reminders of a holy truth: in this event, the selfsameness of the Man of Sorrows and the Sacrament of the Altar.

But Christian knowledge is not altogether dependent on personalities as great as St. Gregory; so great a pope, theologian, liturgist and mystic may never again walk the earth until the resurrection of the flesh. Nor is Christian knowledge altogether dependent on a privileged communication between Christ and His vicar on earth; events such as the Miraculous Mass of St. Gregory are worthy of artistic treatment precisely because they are extraordinary.

Fundamentally, the reason we know anything about Jesus Christ— that He was born of the Virgin Mary, was crucified, died and was buried, rose again and ascended into heaven—is because these things actually happened, and someone saw or heard them happen. Before they were written as scriptures, before they were declared as doctrines, they were kept as memories.

If the Blessed Virgin Mary had told nobody what the Archangel Gabriel had said to her at the Annunciation, we would not know it. If Jesus Christ had told nobody that His sweat became as blood while He prayed in Gethsemane, we would not know it. Even St. Luke, writing with divine inspiration, knew about these events according as they have delivered them unto us, who from the beginning were eyewitnesses and ministers of the word.

In the upper corners of the picture, I drew two theologians of the fifth century, St. Prosper of Aquitaine and St. Vincent of Lerins. During their earthly lives, these men were theological opponents, more so even Saints Peter and Paul. I consider it a mark of providence that from their disputations, two beautifully complementary ideas emerged.

St. Prosper articulated the well-known maxim: “The law of worship establishes the law of belief.” Worship was the first way by which the memories of those who saw, heard and touched Jesus Christ were carried forward. Because the law of worship predates such things as the settlement of the canon of scripture and the definitions of the ecumenical councils, it is the first criterion of orthodoxy. Thus it is the first criterion of sacred art as well. Sacred liturgy and sacred art must be concordant, for they are records of the same memories.

St. Vincent wrote in his Commonitoria: “We hold to what has been believed always, everywhere and by all.” Universality, antiquity and consensus are the marks by which a true tradition can be told from a false. Elsewhere in the same book, he describes the legitimate development of tradition, which he compares to the growth of a body:

“Men when full grown have the same number of joints that they had when children; and if there be any to which maturer age has given birth these were already present in embryo, so that nothing new is produced in them when old which was not already latent in them when children. This, then, is undoubtedly the true and legitimate rule of progress ... that mature age ever develops in the man those parts and forms which the wisdom of the Creator had already framed beforehand in the infant. Whereas, if the human form were changed into some shape belonging to another kind, or at any rate, if the number of its limbs were increased or diminished, the result would be that the whole body would become either a wreck or a monster, or at the least would be impaired and enfeebled” (St. Vincent of Lerins, Nicene and Post-Nicene Fathers, Second Series, Volume XI. Translated by C. A. Heurtley. New York: Cosimo, 2007).

As Catholics we have the benefit of the Magisterium exercised by the successors of the Apostles, our bishops. They have been given the authority to judge disputes over tradition and to bind the faithful to assent. But they do not create tradition themselves. They receive their knowledge from existing sources, and these are sources that anyone can seek and find.

By looking to liturgical and patristic sources, a religious artist can draw a more complete picture, he can dig deeper, than by looking to magisterial documents only. He may unearth something wonderful. Discovering a tradition that has been lost is thrilling; it is like knocking the dirt from a buried piece of lumber and finding that it can yet raise the dead.