This is a revised version of a lecture given by artist Daniel Mitsui to open an exhibition of his work in September 2015.

The name of this exhibit and lecture, Invention and Exaltation, refers to the two liturgical feasts dedicated to the True Cross. The Invention of the Holy Cross, celebrated on May 3, commemorates events that occurred in the early fourth century.

At that time, St. Helen, the mother of the emperor Constantine, travelled to Jerusalem to seek this relic. One of the Jewish scholars of the city knew its location; the secret had been passed down through his family since the time of the Passion. He revealed it to Helen after intensive inquiry; there, three crosses were found. To distinguish the cross of Jesus Christ from the crosses of the thieves, each was held over a corpse. The deceased came to life upon touching the True Cross.

The relics of Our Lord’s Passion occupy a and degree and type of veneration within Catholic tradition closely akin to that of holy images. Comparable veneration is given to each, and their histories are tightly interwoven. The Invention of the Holy Cross inaugurated the first great era of Christian art; Christian art, which includes holy images in mosaic, sculpture, and painting, emerged from underground after the persecutions along with the sacred wood from the soil of Jerusalem. As described by the art historian Emile Mâle:

“The discovery of the Holy Sepulcher and the True Cross in 326 must be considered as one of the great events in the history of Christianity; it was seen as a genuine miracle. Constantine immediately had magnificent monuments built on the site of rediscovered Calvary.... Countless pilgrims from the remotest parts of the world flocked to Jerusalem. It was not enough for them to venerate the Holy Sepulcher; they visited all of the places consecrated by the Gospels, and everywhere they found magnificent basilicas.... All of these buildings were decorated with mosaics” (Emile Mâle, Religious Art in France: The Twelfth Century. Translated by Marthiel Matthews. Princeton University Press, 1978).

Sacred art from this period is confident, dogmatic, and grand; its figures no longer wear the disguises of Classical antiquity, as they did in the art of the catacombs. Pilgrims to Jerusalem collected holy oil from the shrines in tiny flasks; these were decorated with the same images seen in the mosaics. Through portable objects such as these, the artistic traditions reached the ends of civilization.

In the early seventh century, the army of the Persian king Chosroës took Jerusalem and carried away the relic of the True Cross. According to the Golden Legend of Jacobus de Voragine:

“Chosroës wanted to be worshipped as God. He built a gold and silver tower studded with jewels, and placed within it images of the sun, the moon and the stars.... He sat on a throne in the shrine as the Father, put the wood of the cross on his right in place of the Son, and a cock on his left in place of the Holy Spirit” (Jacobus de Voragine, The Golden Legend. Translated by William Granger Ryan. Princeton University Press, 1993).

The emperor Heraclius led a crusade to recover the relic. Victory having been achieved, he personally restored the True Cross to the Church of the Holy Sepulcher. The feast of the Exaltation of the Holy Cross commemorates this. 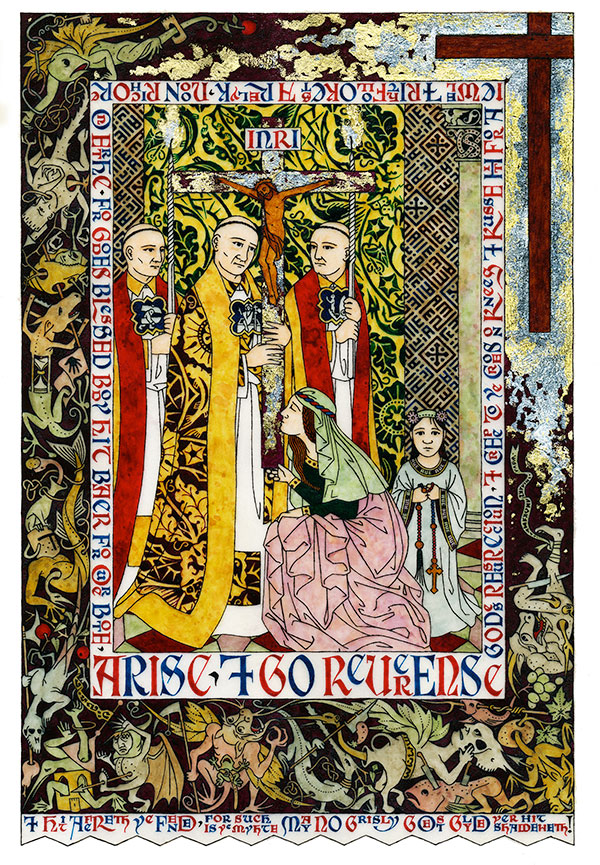 The Apostle Paul commands all Christians to stand fast, and hold to the traditions they have learned. But where is a religious artist to stand when he has learned, in one sense, nothing at all from the void of modernity? There is not now any tradition of sacred art that is handed down with a simple and ingenuous faith. There is not now any common mind and spirit among the faithful that might move them to build together, over centuries, a great cathedral. It is difficult enough to gather two or three who agree.

In our time, tradition is not a thing that is handed down so much as a thing that must be excavated. And once an artist begins to dig, he finds, in a different sense, altogether too much.

The part of the artistic heritage of the Catholic Church that has survived the rust and moths that consume, the iconoclasts and revolutionaries, has been documented, photographed and circulated as never before. Innumerable museums, libraries and treasuries display digital photographs of their collections on the Internet.

This can be a help to education and research; I rarely begin a drawing without examining photographs of manuscript miniatures in the Digital Scriptorium, or of panel paintings in the Wikimedia Commons. In a drawing I once made of the Sorrowful Mysteries of the Rosary I borrowed elements from paintings by Hans Holbein the Elder, Jan Polack, Hieronymus Bosch, Gerard David, Martin Schongauer, Rogier van der Weyden and Nikolaus Obilman; two decades ago, I would have found maybe half of these paintings reproduced in the books available to me. Two centuries ago, I would have needed to cross an ocean to see any of them.

But in this superabundance of information, another problem emerges: the holy images are not lost, but reduced to triviality. Anyone can download a photograph of the Chi-Rho page from the Lindisfarne Gospels, the Incarnation Window at Chartres, or the Ghent Altarpiece. He can print it on a t-shirt, a coffee mug or the case of his smart phone. He can ‘like’ it on Facebook, or ‘tweet’ it, or ‘pin’ without even taking a close look at it.

The image thus becomes his means of constructing and projecting a persona, his means of saying: I am this sort of individual, this sort of Catholic, because I like this sort of art. What does selecting Fra Angelico say about him? Or Caravaggio? Or William Bouguereau? Does putting one painting by each in his screensaver prove his broadness of mind? Does adding one by Georges Rouault prove his boldness?

At that point, religious art ceases to be about God and His angels and His saints. It is not even about the artist who made it; it is about the person who chooses to like it. It is like a relic of the Holy Cross placed on a table to the right of a king’s throne: not destroyed, not forgotten, but not exalted either. It is set beside, rather than above, him.

In our time, invention and exaltation describe well the duties of a religious artist. Invention here has the older definition of the word; it does not mean creating from nothing, but rather finding. If the artistic traditions have been buried, his task is to discover them; if they have been stolen, his task is to retake them. Once they are found or retaken, his task is to bring them to their proper place and give them honor as high as his abilities make possible; that is, to exalt them. This is like carrying the stolen relics back to Jerusalem, as Heraclius once did.

About this, the Golden Legend says: “Heraclius rode down the Mount of Olives, mounted on his royal palfrey and arrayed in imperial regalia, intending to enter the city by the gate through which Christ had passed on His way to Crucifixion. But suddenly the stones of the gateway fell down and locked together, forming an unbroken wall. To the amazement of everyone, an angel of the Lord, carrying a cross in his hands, appeared above the wall and said: When the King of heaven passed through this gate to suffer death, there was no royal pomp; he rode a lowly ass, to leave an example of humility to his worshippers.... With those words the angel vanished. The emperor shed tears, took off his boots and stripped down to his shirt, received the cross of the Lord into his hands, and humbly carried it toward the gate. The hardness of the stones felt the force of a command from heaven, and the gateway raised itself from the ground and opened wide to allow passage to those entering.”

Here is a lesson for those who seek to reintroduce the traditions; no project, even a righteous one, will meet divine favor unless it is undertaken with humility. It is not the artist that is to be arrayed, celebrated and exalted. God would rather brick him out of the Holy City than admit him to the ruin of his soul.

I often quote one of the fathers of the Second Council of Nicea, which was convoked in the year 787 to end the first iconoclast crisis. He said: “The execution alone belongs to the painter; the selection and arrangement of subject belong to the Fathers” (Mâle, The Gothic Image). I consider the selection and arrangement of subject that belong to the Fathers to be something like a relic, and the execution that belongs to the painter to be something like the making of a reliquary. Artistry without tradition is like an empty reliquary: beautiful perhaps, but unworthy of veneration. Tradition without artistry is like a relic kept in a cardboard box: worthy of veneration, but deserving of better treatment.

I believe that the traditions of sacred art deserve exaltation for the same reason the relics of Our Lord’s Passion deserve it—because they touched God.