The Art of Beuron

The particular set of Beuronese-style murals reproduced for the Angelus Press 2004 Liturgical Calendar (see advertisement on back cover of this issue of The Angelus) was executed between 1908-10 for St. Mary's Catholic Church in McKeesport, Pennsylvania by Dom Bonaventure Ostendorp (1856-1912) and Dom Raphael Pfisterer. These Benedictine artist-monks were members of St. Vincent's Archabbey of Latrobe, Pennsylvania, an abbey established under the patronage of Bavarian King Ludwig I. They were copied from the original "Life of the Virgin" series in the Benedictine Abbey of Emmaus in Prague, of the Czech Republic, which was painted by monks from the Beuron Abbey. The murals of the Emmaus Abbey were destroyed when it was bombed and gutted by fire in World War II (1945).

St. Mary's Roman Catholic Church was demolished by the Diocese of Pittsburgh in February, 1997. Before demolition, its "Life of the Virgin" Beuronese murals were scraped from the walls and publicly auctioned December 7, 1996. Fifteen of the life-sized murals were purchased that day, thanks to the generosity of the faithful assisting at the Latin Mass at the Society of Saint Pius X's Our Lady of Fatima Catholic Church (Carnegie, Pennsylvania), and they now decorate that church's nave. It is one of only two surviving sets in the world.

The other surviving replica of the "Life of the Virgin" mural series is on the walls of the Abbey Church of the Immaculate Conception Benedictine Abbey in Conception, Missouri. These were painted on plaster starting in 1893 after the Basilica was damaged by a tornado that year, making its redecoration necessary. Because of the deterioration of the plaster over the years, these Benedictines recently sought donors to underwrite the cost of restoring their scenes from the "Life of the Virgin" for $15,000 apiece.

The three main characters in the development of Beuronese art were Maurus Wolter (d.1890), Desiderius Lenz (d.1928), and Gabriel Wüger (d.1892). Wolter, who would become the first abbot of the monastery of Beuron, had a keen interest in the revitalization of Catholic art.

In 1863, Lenz, Wüger, and a disciple of Wüger, Lukas Steiner, joined a group of artists living in Rome who were popularly known as the "Nazarenes." This school of German artists made Rome its home in 1810. Its six founders left the Vienna Academy of Art in rejection of the degradation of art effected by the Renaissance and modernity. They wished to again place art in the service of religion, not of man. This meant developing an art-style in opposition to the artistic tradition of the baroque and the roccoco which had headed art in the direction of ever greater psychological or visual realism and "painterliness," that is, emphasis on the qualities–such as color, movement, light and atmospheric effects, paint texture, and so forth–that fed the senses rather than the mind. Artists tended to make themselves into celebrities and the most important thing about art. On the contrary, the art of the Nazarenes was to serve the highest ends, which ultimately meant religion, and not the vanity of courts, wealthy individuals, nor the artist himself.

The Nazarenes formed a brotherhood and took their name from the patron saint of artists, St. Luke. They called themselves the Lukasbruder or Brothers of St. Luke and modeled themselves on a medieval guild. In Rome-eternal and universal-fashions and customs of the day paled before the enduring truths of art and religion. They lived a monastic existence there, each with a small cell to work in and a smaller one for sleeping. They took a frugal midday meal which they prepared themselves. One brother wrote that he desired "...neither stews nor pastries nor any other spice than salt, for the face of a friend is a better spice with a meal than all the spices in India." In the evenings, the artists gathered in the refectory to draw, discuss each other's work, and present short talks on the questions of art and esthetics. There was no question of female models. They were ruled as likely to produce impure thoughts and thus affect the quality of the art. 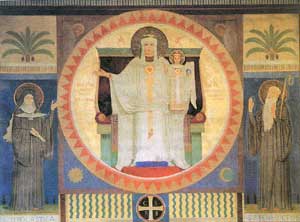 "The Mother of God Enthroned in Glory" above the entry of the Mauruskapelle,
the first church building commissioned to the Beuron monks (1868-70).
This votive chapel was underwritten by Princess Catherine of the royal Hohenzollern family.

For purifying both their lives and art, as well as the way they wore their hair–"like the Nazarenes"–that is to say, shoulder length and parted down the middle (some say to imitate Jesus Christ), they were disparagingly called the "Nazarenes," a name which stuck. The Nazarenes understood that just as the "religion" of the French Revolution required something like an act of conversion on the part of its adherents, so it was in the case of the Lukasbruder in order to transform oneself and culture (Lionel Gossman).

The Nazarenes used traditional Christian subjects from the Old and New Testaments and denounced modernity's arbitrary and subjective attempts to invent new symbolisms for itself. Contrary to the then current "art of special effects," the art-style of the Nazarenes was "conscientious, beautifully balanced, undramatic, in which movement, physical and psychological, often seemed either held in suspension or highly conventionalized." In eliminating gimmicks, by using flat colors, limited lighting and perspective, the Nazarenes attempted to overcome the materiality of the painting in order to direct the viewer's attention to its "spiritual" qualities, ultimately, its moral and religious meaning. It was "nonsense to praise an artist's audacity...or to find something to brag about in it" (Franz Phorr). Charles Eastlake wrote in London Magazine (1920): "For simplicity, holiness and purity, qualities which are the characteristics of scriptural scenes, no style was better adapted than that of [the Nazarenes]...It diffuses a sort of calm and sacred dream. To censure it for being destitute of colour and light and shade would be ridiculous; such merits would, in fact, destroy its character."

Nazarene art was not intended for exhibition in museums and galleries. Part of the movement was to combat the modern transformation of art into a commodity to be displayed solely in homes or put up for sale in galleries. The Lukasbruder believed art should once again become part of the fabric of a community's life and an expression of its Catholic Faith, linked to public buildings–church, town hall, palace–or private purpose, such as prayer or recollection. The Nazarenes hoped to restore the relation between art and the people that had been obtained in the Middle Ages which would once again speak "from the walls of our high cathedrals, our peaceful chapels and solitary cloisters, from our town halls and warehouses and markets."

Of the three men who introduced themselves to the Nazarenes in Rome–Desiderius Lenz, Gabriel Wüger, and Lukas Steiner (d.1906)–Lenz became the principal theorist, seeking a "pure" art independent of the excess of baroque and the naturalism of romantic. Like the Nazarenes, the artists who would become known as the "Beuronese" were in search of natural simplicity and clarity with an emphasis on essentials and conscious neglect of accidentals and details. They chose as their guiding principles the use of plain backgrounds and basic colors, a limited use of perspective and a repetition of decoration. 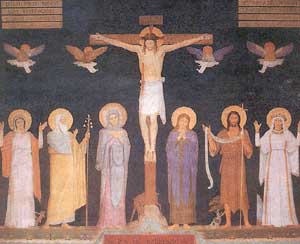 The scene of the crucifixion is from the reredos behind the Mauruskapelle altar.

The most significant principle of the Beuronese school was the role of geometry in determining proportions. During his time in Rome with the Nazarenes, Desiderius Lenz became fascinated with Egyptian art which was now available to be studied after Napoleon had brought back many pieces from there. Lenz thought sacred art should reflect the natural laws of aesthetics through formulae he believed were forgotten after the Greeks and Egyptians. Geometrical proportions determine ideal forms, and the result is an innate harmony comparable to the mathematical relationships in musical composition. This is why the relationship between Beuronese art and the simultaneous revival of the "pure" music of Gregorian chant was so compelling for Lenz and others. One of the elements of the strongest variation of Beuronese art is a distinct Egyptian reminiscence. (The murals of this calendar, however, are of the softer Beuronese style which follows the trademark gentleness of the Nazarenes.) Other general principles of the style include:

Lenz and Wüger thought of forming a monastic community of artists. They believed that in order to make sacred art one should lead a Catholic life in community. In 1868 in Rome, they met Maurus Wolter, who had similar artistic aspirations for his young Benedictine monastery at Beuron. He wanted his monastery to play a role in the revival of Church art just as it was beginning to do in the revival of Gregorian chant (in emulation of Solesmes). Lenz was attracted to Beuron because of the abbey's use of Gregorian chant, which he saw as parallel to his own efforts in art and architecture. Gabriel Wüger entered Beuron in 1870, followed by Lukas Steiner and Desiderius Lenz in 1872. The original "Life of the Virgin" series was painted at the Emmaus Abbey in Prague under the direction of Lenz, Wuger, and Steiner between 1880-87.

In his apostolic letter Archicoenobium Casinense (1913), on the occasion of the consecration of a crypt chapel at the abbey of Monte Cassino decorated in the Beuronese style, Pope St. Pius X likened the artistic efforts of the Benedictines of Beuron to the revival of Gregorian chant by the Benedictines of Solesmes when he wrote, "...together with sacred music, it proves itself to be a powerful aid to the liturgy" (AAS 5, 1913, pp. 113-17).

Images of the Beuronese style can be found in a variety of religious books. Beuron, Germany was also a center for book publishing. Beuronese illustrations in altar missals and prayer books for laity are often seen. The Daily Missal of the Mystical Body, also known as the Maryknoll Missal, published in Boston (1961) with an imprimatur of Richard Cardinal Gushing, contains several images identical to the ones in the Our Lady of Fatima group.

St. Mary's Catholic Church was founded 1897 by German-speaking Catholics on Pittsburgh's southeast side. Their church was designed by the famous church architect, John Theodore Comes, and finished in 1906. Seventeen other Catholic churches, of a variety of classic designs, were designed and built by John T. Comes in Pennsylvania, two in Ohio, and at least one in New York. St. Mary's in McKeesport was considered by art historians as one of the best examples of "Lombardy-Romanesque" basilica architecture in the United States. In 1993, the declining membership of St. Mary's was merged with three other parishes and dissolved. The church was demolished because it "lacked a parking lot and social hall."

The "Life of the Virgin" murals were painted on 6' x 7' canvases and tacked to the walls of St. Mary's with a mixture of glue, paint, and plaster, twenty feet from ground level. In the summer of 1996, they were removed. For their preservation and eventual installation at Our Lady of Fatima, a support frame was built for each and stretched with fresh canvas to which the mural canvases were then adhered with "rabbit skin" glue, a natural adhesive. The surfaces were painstakingly hand-cleaned with turpentine using cotton balls and Q-tips. They were framed in gold-painted wood and hung. The cost of this "Part I" restoration by an art professional was $1000 per mural.

The marring of some of the murals is due to the removal process and their having been rolled up for transport. For an additional $1000 per mural, two of them–"The Vision of King David and the Prophet Isaias" (cover) and "The Virgin Flees into Egypt" (August)–received further "Part II" restoration. The cracks and mars of these murals were carefully "in-painted" to match the rest of the scene.