In Defense of Monasteries

While in the Benedictine novitiate twenty-one years ago in France, an old, somewhat faded photograph, enlarged and set into a simple wooden frame, was put on the wall for the novices to look at. Look and see is what we novices were experts at doing! Especially when it came to the exercise of that holy and exalted virtue: Curiosity! 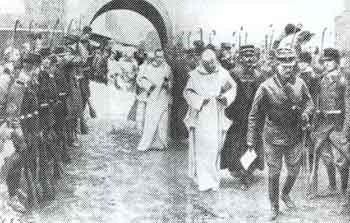 We all looked at it curiously. It was an unedited photo of the Carthusian fathers being arrested and marched out of their monastery near Grenoble, France. Each individual monk, in the grip of a soldier, was being escorted by the arm down the monastery road which was lined on both sides by hundreds of soldiers who stood at attention as the monks, heads downcast, solemnly passed by in file. It took a moment to take in the impact of this scene. Carthusian monks, under arrest...? Their crime? "Un-usefulness," we were told.

Seeing the indignation and disbelief on our faces, a word of explanation was given to us. It was the Waldeck-Rousseau Act, an advance of anti-clericalism. The Third Republic declared the religious life to be against the law. The vows of religion taken by monks were seen as a crime against liberty and equality. The secular state considered the monks as criminals, at best these monastic men were not of any "use" to society. That image captured the essence of what would be applauded as a modern idea. In that sense, we guessed at the origin of the old photograph. Was it shot by the liberals as a close-up portrait of victory?

In the eyes of Benedictine novices, the Carthusians are looked-up to like "big brothers" in the ranks of religious orders. They are revered as the summit of the contemplatives of the Church; there is nothing higher. If St. Bernard wrote, "the monastic man is a fighting man," then these monks are the elite forces.

The enemies of the Church know how to get the edge on their mortal adversary. They attack her at the highest principles. One principle, shake the contemplative life of the Church and She will come tumbling down. Monasteries are the first targets of revolution. A freshly decapitated tonsured head was once a most highly prized trophy! Carthusian monks were the proto-martyrs of England's Anglican Reformation, and now at the turn of the 20th century restless France would make a law obliging them to become useful to the State by apostasy.

There is more to the story, volumes more, but to us that old photograph in the novitiate said it all. Persecution has since passed, but the idea has remained behind like a stain, or even worse, a graffiti on the wall of the Church militant: "Of what use are monks?"

The crisis in the Church calls all Catholics to arms and to action. It is high time for the most militant of missionary work. The crisis remains at peak level. And the question remains, "Of what use are monks?"

By nature the Church is missionary. Her work is divided into two halves, one active, one contemplative. Action and contemplation, both are missionary. But what about that "other half," the lesser known, contemplative half, the part reserved to monasteries? The other half without which there is not the "whole" Church? The two halves put together, active and contemplative, comprise that "seamless garment" miraculously not able to be divided. In this crisis which cries out for action, can both be inseparably one?

The following treatise was originally written in self-defense by our venerable Carthusian brothers, but they speak for any contemplative, be they Benedictine, Trappist, Carmelite, or a St. Benedict, a St. Bernard of Clairvaux, or a St. Teresa of Avila. This little work is an Apologia of Monastic Action, setting forth the principles of the contemplative apostolate. May it serve as a defense of monasteries.

Contemplatives: Their Place in the Church Militant