A Jewel in the Society's Crown 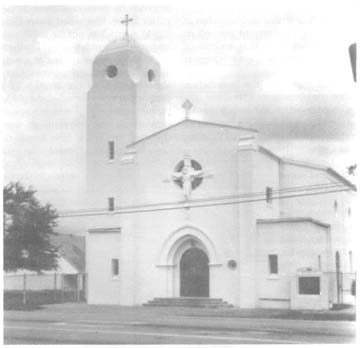 Queen of Angels is the third name under which the present church building has been known in its eighty-one year history. In 1909, when the parish was created, it was called St. Joseph's. In reality, St. Joseph's was a mission, serving many square miles of area in Galveston County. In 1936, after acquiring a relic of the True Cross, the church's name was changed to Shrine of the True Cross. In the early 1940's growth of the parish necessitated an expansion and the present church building was erected. This beautiful church was abandoned in 1974 when a new facility called Shrine of the True Cross was built two miles away, near the Interstate Highway.

In 1976, during a visit to Texas, Archbishop Lefebvre requested that a house for the Society of St. Pius X be established in the area. The purpose of such a house would be to provide a permanent base from which priests of the Society would serve the needs of the faithful in the southern and central United States.

Acting on His Grace's request, we found only one Catholic Church for sale in the Galveston-Houston Diocese—the old Shrine of the True Cross. However, the last thing the diocese wanted to do was sell it to the Society of St. Pius X! Rather than have traditional Catholics in abandoned churches, they preferred to see them destroyed.

We contacted a non-Catholic attorney to buy the beautiful three-acre property for us. At the time it seemed more than we could ever need with its large mission-style church which seats 500, a large convent where many nuns could live (we only had one nun at the time!), just as large a rectory, two school buildings complete with its own library room, a large parish hall! But to go on with our story, this attorney represented a corporation by the name of Gibraltar Motor Leasing and it was arranged that this corporation would buy the property but turn it over to the Society immediately thereafter. When the diocese thought that an auto leasing company was going to be the purchaser and tear the church and grotto down, they were delighted! One man, a truly good and holy Catholic man from out of state, put up the $300,000 purchase price in cash. As negotiations proceeded, the diocese became suspicious—they wanted to be absolutely sure that an auto leasing firm was indeed going to take over. First, they called and asked to remove the confessionals. After all, what does an auto leasing firm need with confessionals? "Take them," was the response. Then, a few days later, they wanted the bell. Father was called. "Give it to them," he answered, "we'll get another." Finally, a week later, the diocese called and said, "We want to chisel the crucifix out of the front facade of the Church." This time, our answer was, "No, but when we begin to demolish the church, we'll call you." This was accepted and the closing was scheduled.

On November 18, 1976, the property formerly known as Shrine of the True Cross was purchased for the Society of St. Pius X and became known as Queen of Angels. When the diocese found out who had taken possession of the church they were furious. In late November, the former pastor of the place arrived at the convent, went into their small chapel and proceeded to smash the altar to bits with an axe. Their caretaker, who was still living on the property, tried to stop him, pleading with his boss not to destroy the altar. To those in the new Church, anything is better than the old Church.

When a similar purchase was made in Kansas City a few years later (St. Vincent de Paul was purchased through a black Protestant minister), the bishop of Kansas City called this minister in and let him have it for selling the church to the Society of St. Pius X. "Those people aren't even Catholic!" he yelled. To which the minister drawled, "I'm not Catholic, and you sold it to me!"

When the faithful took possession of the property in Dickinson they had several buildings in total ruin—including the church building itself. There were great gaping holes in the roof, there were mountains of trash and debris piled everywhere—but you never would have known it by the looks on their faces! Joy and enthusiasm knew no limits!

The first Mass celebrated on the property was on the Feast of the Immaculate Conception, December 8, 1976. Parishioners had worked very hard to clean and paint and furnish the parish hall, which was to be used for the celebration of Mass until our dedication. Following Sunday Mass, during that winter and spring of 1977, we used to gather in the church building (with no heat!) for coffee and donuts—in anticipation of what was to come. During those days, no one ever wanted to leave and go home!

As we began the cleaning process, we found the only thing in the church building worth saving (and precious was the discovery!) were the relics of the saints still in the Novus Ordo table—left there for years under piles of trash and moldy books.

During the early Spring of 1977 we learned through traditionalists in Kansas City that their diocese was going to auction off the contents of the St. Joseph's Hospital Chapel. Marble altars, marble communion railing, marble statues and stations, paintings—everything we needed, we were able to get, for a song! A few of our parishioners, with the help of parishioners in Kansas City, completely dismantled the huge main altar and the side altars—numbering each piece as they went so they could be rebuilt in Dickinson. Literally hundreds of pieces of marble were returned to Dickinson! We had the immense satisfaction of having these glorious items returned to their intended use. Over the next few months, other treasures were found: the marble bas relief depicting Christ Enthroned, which formerly served as the frontispiece on the main altar of St. Patrick's Church in Galveston, was found in an antique shop in Houston and installed in our baptistry; the pedestals for the statues of Our Blessed Mother and St. Joseph were fashioned from the frontispiece of the main altar of the Church of the Holy Rosary in Rosenberg, Texas. A bell was acquired from the old St. James' Church in Jessup, Pennsylvania. In accordance with the Catholic tradition of naming a bell when it is blessed, we named our bell Marcellus, symbolizing the voice of truth ringing throughout the land, calling the faithful back to Holy Mother Church. An impressive collection of relics of the saints, and other religious items, including vestments, were obtained in Europe.

For six glorious back-breaking months parishioners worked from dawn to well after dusk. Since Dickinson was 30 miles south of Houston, it was a true hardship for many—a licensed electrician, who had been attending the Society Mass (at the Travelodge in Houston) for a couple of years, lived 30 miles north of Houston, yet he came every night for months to repair miles of wiring! Then, as now, our parishioners were scattered over the very large metropolitan area of Houston. But our dedication was scheduled for Sunday, July 10, 1977. Archbishop Lefebvre would be here to bless our church!

July 4th weekend, just days before our dedication, was frantic. Nearly 200 people, working on every part of the property, were determined to be ready for the next Sunday. On the rectory, for instance, there was three levels of scaffolding—with three levels of painters! At the end of that long day, after barbeque and fireworks, we had only to put the flowers on the altar! We were ready! No one who participated in the restoration of Queen of Angels will ever forget it.

At last, on July 10, 1977, Archbishop Marcel Lefebvre dedicated the church as Queen of Angels. Traditionalists from all over America—some from Mexico and South America—came to Queen of Angels that day, numbering well over 3,000 souls. It was glorious!

In those hectic days of the mid to late 70's two priests from Dickinson served not only Dickinson but Dallas, El Paso and San Antonio in Texas, as well as New Orleans, Oklahoma City, Tulsa, Kansas City, St. Louis, Topeka (Kansas), Monet and Springfield (Missouri), Little Rock, Birmingham, Atlanta, Raleigh and Charleston!—most with a weekly Mass on a week night! Queen of Angels was to once again become a mission church, home base and headquarters for groups of traditional Catholics who were springing up everywhere throughout America.

Today Queen of Angels is a parish of 400 to 500 people, with a school, convent, rectory, parish hall, bookshop, print shop, offices and mailroom for the Angelus Press.

One final note of interest. During the 1930's, Monsignor Carney, a well-known priest of the Galveston-Houston diocese, had a local radio program called "The Catholic Hour." One Sunday afternoon, on his program, he foretold the terrible things that would happen in the Church, how things were going to change—even the Mass. But, he added, his church property would not be affected. His parish church is today Queen of Angels.