The subject of this review, Fatima Revealed—and Discarded, consists of a selection of extracts from this 3-volume work, arranged by agreement with the author, and edited and translated by Timothy Tindal-Robertson, who published the work in England in March of this year under the imprint of his own Catholic press, Augustine Publishing Company. The book, which is divided into 12 chapters plus a brief Appendix on the Third Secret, is 224 pages in length, and contains 9 black and white illustrations in the text.

It is very appropriate that this Marian Year should see the publication of a book which at last begins to tell us, in the words of the French original, "the whole truth about Fatima." I had been hoping that an English translation of Brother Michel was going to be undertaken since various eminent Catholic authorities, such as Dr. Eric de Saventhem and the late Hamish Fraser, had assured me that his works on the subject are an absolute classic of research and documentation.

The title of this work succinctly expresses the dual theme contained in this highly instructive selection. Part I, Fatima Revealed, deals with the apparitions of the Virgin at Fatima and the quite extraordinary consequences which they produced, initially in Portugal and Spain, and then, as they began to become more widely known and accepted, throughout the whole Church. Part II, Fatima Discarded, meticulously documents the almost completely unknown story of the insidious campaign directed against Fatima from within the Church, and which began as early as 1944.

Portugal, we learn in chapter one, was dedicated as the "land of Holy Mary" from the very moment of its foundation following the victory of the French crusader knights over the Moors at the battle of Ourica in 1139. Thereafter the country remained faithful to its dedication up to the consecration of the kingdom to the Immaculate Conception by King John in 1646, but the following two centuries saw the Church in Portugal ravaged by the same disease of Protestant-Masonic liberalism to which the rest of once-Catholic Europe steadily succumbed.

Having murdered the last Catholic monarch and his son in 1908, Freemasonry installed a ferociously anti-Catholic government, and in 1911 the author of the law of the separation of Church and State declared that "in two generations Catholicism will be completely eliminated from Portugal".

This chilling vision, which was on the brink of being turned into reality, was miraculously and totally reversed by the simple apparitions of the Blessed Virgin at Fatima in 1917.

Touching eye-witness accounts, which Brother Michel has researched from largely unknown contemporary records, reveal that it was the spontaneous pilgrimages of the simple people, and the wonderful miracles of healing which the Virgin worked in response to their faith, which began the astonishing resurrection of Portugal's destiny. The wonderful events in Portugal and then in Spain, as described in these early chapters, constitute the advance proof that She alone who "hast overcome all the heresies in the whole world", as the Liturgy reminds us, will indeed effect that stupendous miracle yet to come of the conversion of Russia. The Virgin alone reconstructed the whole life of the Church in Portugal, this benevolent spiritual leaven vigorously extended into all aspects of social and political life, and some 20 years after her apparitions She preserved her favoured nation from two devastating wars. As the patriarch of Lisbon, Cardinal Cerejeira, testified: "What happened in Portugal proclaims the miracle, and is the announcement of what the Immaculate Heart of Mary is preparing for the world." 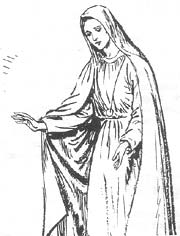 Chapter 6, on Spain and Fatima, contains very interesting communications of Our Lord to Sr. Lucia. Although that most Catholic country had suffered a terrible martyrdom of the faithful in the Civil War, Our Lord was displeased that a true spiritual reform of the people had not subsequently been undertaken by the bishops, and threatened Spain with a second scourging at the hands of the Soviets if this were not put in hand. Fortunately the Spanish bishops "received with the greatest respect the solemn warning from Heaven which had been transmitted to them by Sister Lucia some years before" (p. 72).

The next chapter explains the full significance of the dire warning of Our Lord: "Make known to My ministers that as they follow the example of the King of France in delaying the execution of My wishes, they will follow him into misfortune... Like the King of France, they will repent of it, and they will do it, but it will be late. Russia will have already spread her errors throughout the world..." (pp. 73, 74). How many are aware that it was exactly one century later to the very day after the original communication to St. Margaret Mary, that the rebellious Third Estate dissolved the Catholic monarchy of France and proclaimed itself the Constituent Assembly? (p. 78).

However, under the pontificate of Pius XII, "the Church embraced Fatima," even if it did not yet fully comply with all the Virgin's requests, and Fatima in consequence went out to "embrace the world", as the headings of the two final chapters of Part I happily express it. Marvels of authentic Catholic renewal abounded wherever the Pilgrim Virgin passed, for example, Cardinal Cerejeira stated that what the Virgin did in Madrid when the statue from the Capelhina first went there in 1948 "nearly blinded him"—and Pope Pius XII himself stated that "heaven rained down blessings, and marvels of grace multiplied everywhere, to such an extent that we can hardly believe what our eyes are seeing" (Radio message to Fatima, on 13 October 1951, p. 120). Among other examples of the extraordinary power of Our Lady of Fatima's interventions, Brother Michel cites the remarkable deliverance of Austria from the yoke of the Soviets, following a rosary campaign to Our Lady of Fatima, on 13 May 1955.

All seemed to be pointing to the full compliance of the Church with the Virgin's requests. In 1950 Pius XII told the Master-General of the Dominicans: "Tell your religious that the thinking of the Pope is contained in the message of Fatima", and to Mgr. Colgan of the Blue Army he said: "The time for doubting Fatima has passed, the moment for action has come" (pp. 162, 163). Brother Michel quotes Pius XII's personal account of the Fatima Miracle of the Sun, which was repeated in the Vatican gardens for the sight of the Holy Father alone in October 1950, and shows that this was a heavenly sign, both of approval for the definition of the dogma of the Assumption, and of encouragement to the Pope finally to carry out the unfulfilled requests of the Virgin of Fatima. But Pius XII tragically remained indecisive in the face of mounting criticism from within. Already by the year 1952 there was not one single allusion to Fatima, and in September of the following year the Virgin came again, silently this time, to make known her sadness at the loss of souls and the increase of sin and apostasy, because her requests were not fulfilled: a statue of the Immaculate Heart of Mary in Syracuse miraculously wept human tears. In the last years of Pius XII, Brother Michel concludes, "one can no longer find a single word in any Roman document which might displease the adversaries of Fatima" (p. 199).

Events had taken this lamentable and generally unexpected turn because of the skillfully fomented opposition to the full implications of Our Lady's requests from within the Church. This work was the work principally of Fr. Edward Dhanis, S.J., a Belgian professor of theology at Louvain, who had published two articles criticizing Fatima as early as 1944. Brother Michel meticulously dissects Dhanis's arguments and concludes that his thesis is "unthinkable, unjustifiable and even scandalous" (p. 144). But tragically for Our Lady's cause, Dhanis was allowed to triumph over Our Lady's advocates in the Civilta Cattolica in May 1953, rose to influential positions in Rome, and henceforward became the authority for all the numerous adversaries of Fatima. Much of Brother Michel's original material is drawn from the numerous articles and books published by the late Fr. Joaquin Alonso, CMF, the renowned Marian theologian who was commissioned to write the definitive history of Fatima by the Bishop of Leiria in 1966. In his work, Fatima y la Critica, Father Alonso cites a very extensive list covering almost 30 pages of all those persons, from almost every country in Europe, who have repeated the deplorable thesis of Dhanis, and concludes: "Dhanis has forged a hypothesis which is as vast as a cathedral, and which can ruin, not only the history of the apparitions of the Angel, but also... absolutely the whole history of Fatima" (p. 200).

The book concludes with a brief appendix on Brother Michel's very important research on the Third Secret of Fatima, summarized here from the full study published as a separate pamphlet by Augustine Publishing Co. He cites Cardinal Ratzinger, who has read it, and the Bishop of Leiria, who both stated in 1984 that it specifies the crisis of faith which the Church is now undergoing, and he concludes that the Third Secret "is at the heart of the Message of Fatima", and that "it is urgent for the good of the Church that it be revealed according to the wish of the Blessed Virgin."