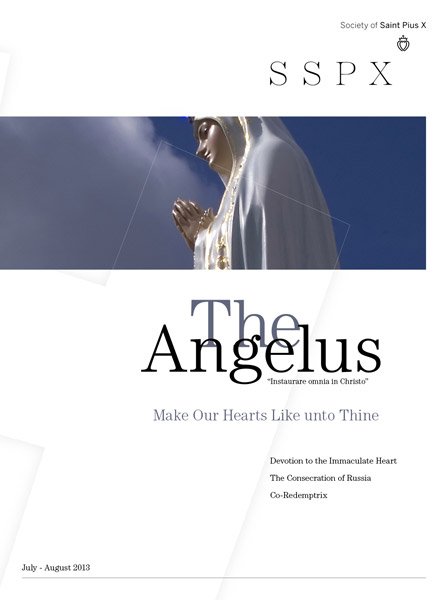 Devotion to the Immaculate Heart

Prayers and sacrifices for sinners, the recitation of the rosary, hell and war, offenses against God and His Mother, secrets to be revealed later, announcement of wars, conversion of Russia and a miracle to come...

The Consecration of Russia

To prevent this, I shall come to ask for the consecration of Russia to my Immaculate Heart and the communion of reparation of the first Saturdays.

Co-Redemptrix: Our Lady as Necessary but Secondary Cause of Redemption

“O happy fault, that gave us such a Redeemer... and such a Redemptrix!”

Who Are You, O Immaculate Conception?

“This is a mystery which surpasses our intelligence, therefore we cannot fathom it. We will not learn it in books, but only on our knees.”

What Does It Mean for the Church Today? The Austrian Miracle of 1955

“The question as to why the Soviets finally decided to abandon their military presence in eastern Austria in the spring of 1955 and to agree to a negotiated withdrawal has preoccupied historians ever since.”

Ingruentium Malorum: On Reciting the Rosary

We want earnestly to draw not only your attention, but the attention of the clergy, of parents, and even of public authorities. We refer to the iniquitous campaign that the impious lead everywhere to harm the shining souls of children.

The Name Written on Her Heart

Sermon by Archbishop Marcel Lefebvre, Feast of the Immaculate Heart of Mary, August 22, 1976

Ashamed of Mary! How Ecumenism Trumped Truth at Vatican II

What are we to think His judgment shall be of those who are ashamed of His Mother?

Mary as Malleus Hereticorum: A Brief Historical and Scriptural Meditation

Public defense of the Faith and creation of a Christian order suitable for leading men to Heaven as opposed to hell require the kind of open Hammer of Heretics represented by St. Anthony of Padua.

War often leads to disfigurement and death, but behind it is a glorious idea of fighting for a good cause.

The proper place for the woman is not a perch, not a pedestal, but a throne. If the man is the king of his own castle, whether that castle be of brick or wood or thatch, every woman is the queen of her husband’s castle.

Loving Your Spouse for a Lifetime

“Happiness is to be found only in the home where God is loved and honoured, where each one loves, and helps, and cares for the others.”

During more than a decade of research in Russia and Georgia, Mr. Montefiore has tracked down and compared the memoirs of Stalin’s mother, his school friends, fellow seminarians, mistresses, and his many terrorist followers.

Is the "morning-after pill" ever licit? Is it abortifacient?

Exclusive Interview with Fr. Jean-Michel Gleize by the Angelus Press

Let us, full of hope and confidence, devote ourselves to the Immaculate Heart. We will thus hasten Mary’s final triumph!