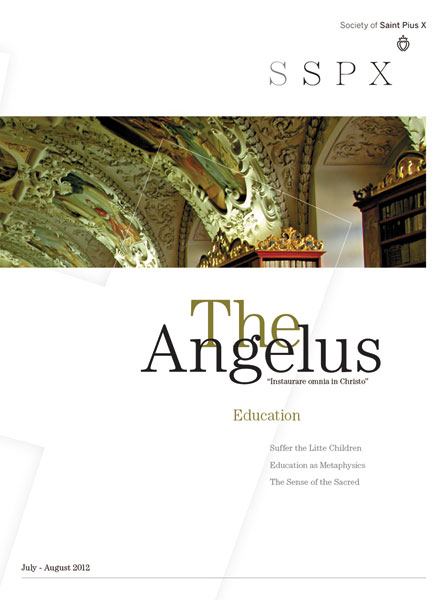 Letter From the Publisher

The motto of the Society of St. Pius X is that of our patron: Instaurare omnia in Christo.

Any true education must seek to make students wise. But modern education denies that there is any unifying principle in reality, and thus presents it as a series of disconnected pieces

Sense of the Sacred

The education of the whole man is a gradual and constant strengthening of every human power, to render all human activity docile to the command of the mind and will, in the light of eternal Truth.

We are all pressed from every direction by the strange dichotomy, so well summarized by Our Divine Savior in His priestly prayer, namely that we must be in the world, yet we cannot be of the world, as Christ was not of the world (Jn. 17:16)

...[N]ever have the enemies of Christ and of His Church shown themselves more bold than today, and never has the mass of men been more easily led by them to destruction.

The nature of God.

Learning the Virtues Through the Mass

For Christians, our goal is the glory of our heavenly Father through sanctification by the Blood flowing from the Priestly sacrifice.

Pius XI Speaks to Us Today

In his majestic encyclical Divini Illius Magistri, Pope Pius XI quotes St. Gregory of Nazianzen as saying that “[education] is the art of arts and the science of sciences.”

This is a true story. It is vile, it is edifying, and it is recommended for all teenagers and even younger children under the direction of their parents.

Father Mazzuchelli found himself, at the age of 23, the only priest in a region [Wisconsin] half the size of Italy.

Passing by the Dragon: Modern Literature in the High School Curriculum

Ultimately, the goal of the literature program is to integrate with all of the other subjects in leading the student to a love for Western civilization with all that it implies.

How to give your “adult” child the proper balance of space and support?

Can scandal ever excuse a man from the culpability for his sins?  If it is true that each man is responsible for his own acts, it does not follow that he is exempt from all exterior...

Syria: “Besides the war on the ground, a media war is unfolding.”  In an interview granted to the Catholic press service AsiaNews on June 7, Bishop Giuseppe Nazzaro, Vicar...

Death in a Technological Age

It is the destiny of every spiritually impoverished age to be no longer able to understand death....

Christians, then, as true followers of Christ, must not despise this earthly life, must not fear it and flee it; instead, they should embrace it and seek to conform it in all things to the will of the Father.