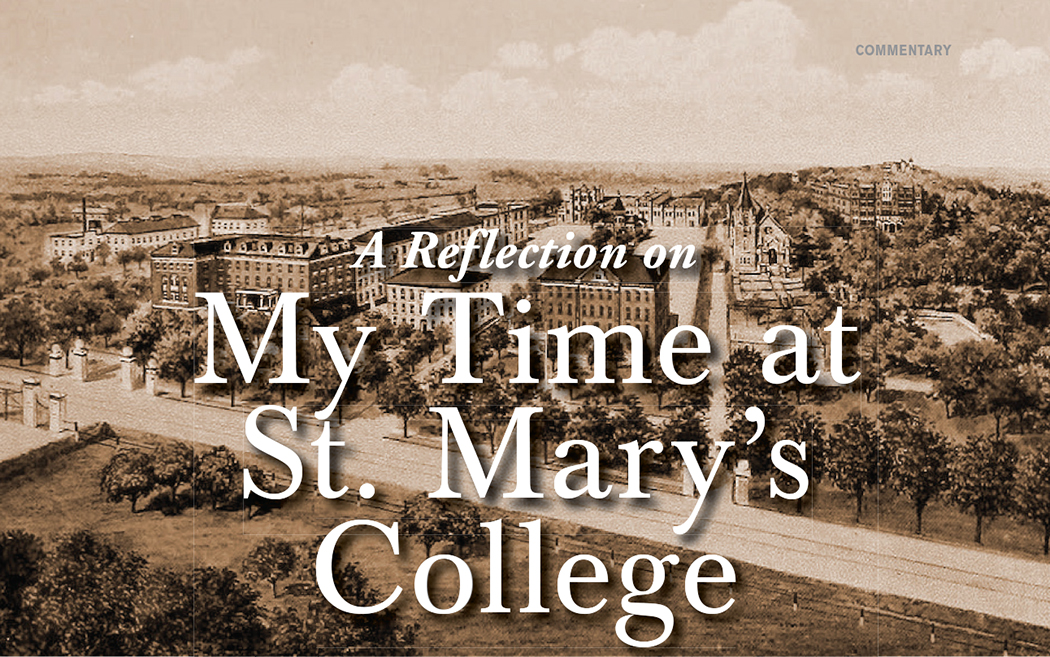 In the children’s novel Carry on, Mr. Bowditch, ship clerk Nathaniel Bowditch teaches his uneducated shipmates to navigate by measuring the stars. “It [does] things to a man,” Nat thinks, “to find out he has a brain.” The point isn’t that the ship arrives at its destination any more efficiently manned by a whole crew of navigators than by one. Nat is just glad that the men are intellectually satisfied and consequently happy. When I arrived as a first-year student at St. Mary’s College, I was surprised to find that—like myself—many of my classmates hadn’t originally wanted to come to St. Mary’s. They were persuaded by parents, mentors, religious or friends to make a decision which, to an ambitious teenager, seemed pointless: working hard for two years at an unconventional liberal arts college which wasn’t even fully accredited. In hindsight, I see that this decision was a mark of freedom: only a free person “wastes” time on an education which is simply good for him.

My two years at St. Mary’s were a step out of time. I remember trying to capture one night, shortly before graduation, when my friends and I sat on a dock watching the stars come out. It was an “eternal moment,” like Dostoyevsky described, or T.S. Eliot’s “intersection of the timeless with time,” and I told myself that it would stay for the rest of my life, continuing somewhere in my soul. Two years had passed quickly, but they had also been marked by interior stillness and a freedom from time because what would come after was not the purpose of what happened during those two years. Some educations are preparations for a busy life in the world: Nursing students study to take care of the sick, MBA students study so they can become successful businessmen, and students of trades study to put their trades into practice. The present is dominated by the shadow of the future, and the education isn’t free; it is at the service of something to come. At St. Mary’s, however, the future held the mission to carry on what we were doing in the present. Rather than preparing us for life as nursing school prepares functional nurses, our liberal education marked us with the mission of returning to itself and of spreading it into whatever active role we played in the world. It established a core of contemplation which defied being “useful” because it, itself, was the final goal. A liberal education is a journey to the heart of what is—not to manipulate, cure or fix it, but simply to contemplate its deepest reasons. This is why the liberal arts have been dismissed by a use-driven society: they can’t be used, but only lived. Learning dead languages or theology yields no method for making factory production more efficient, and no one dissects Homer’s Iliad to harness the words into something practical for ending poverty or curing cancer; the essence would be lost in the harnessing. Instead, the persisting same-ness of the piece testifies to the persisting truths which it celebrates. When Francis Bacon—at the beginning of the scientific revolution—re-defined “the true ends of knowledge… [to be] benefit and use,” he sapped education of its inherent worth: learning was no longer contemplative but became a tool whose worth was measured by its productivity. Since our minds are so closely tied to our identity, this is only a step away from the conclusion that people themselves should be measured by their productivity. Bacon’s modern day disciples champion an exclusively STEM system of education in which the classroom is merely a springboard to material inventions. The liberal arts classroom is not a springboard, but a resting place. It is free from the passage of time because its value doesn’t lie in a subsequent product or event, but in the activity of the present moment.

At St. Mary’s, this activity was one of understanding: we were invited to know the way things are most deeply, as a whole, and from a higher perspective. My liberal arts classes were like a kaleidoscope in which many layers contributed to a whole picture which, while greater than any individual subject, depended on all of them. In history, we learned the context of the ideas we discussed in philosophy. At the same time, we saw these ideas play out in the art of epic poetry and novels, and ultimately sought the source of truth in theology. In a spiritual conference, one of the priests at the college explained that our education was freeing us from our own opinions. We could step from the world of our own prejudices to the world as it is, which was always more beautiful. It’s true that this inspired us to plan for vocations which would “set fire to the earth,” but even more importantly our new understanding set fire in our hearts: cor ardens was our college motto. This was the point of our freedom: not primarily in anything we would accomplish, but in setting our minds on noble things to understand and love, and in our consequent happiness. Freedom depends on understanding not only because we need to know what a man should be before we can choose to be a good one, but because understanding is the heart of the human identity. Aristotle says that contemplation, or a wondering gaze at the highest truths, is the act which defines a human person; we are men because we can see the way things are. Our desire to understand is consequently closely tied to our desire to be, and an exploration of the world through the liberal arts is an act of being. As Aristotle explains, “a human being is free… when he is for his own sake and not for someone else.” The liberal arts are deeply for our own sake—not, however, enclosing us on ourselves. Aristotle’s understanding of “for our own sake” is expansive rather than isolating because he sees our highest fulfillment to be an act of contemplation: we gaze in worship at God, the deepest Reason of all. The liberal arts open our minds to contemplation, the friendship with Christ which is our purpose.

At St. Mary’s, we were told that we were, at heart, pilgrims. Pilgrimage was “a microcosm of life,” in the words of our chaplain. Freedom is an invitation to enter into pilgrimage because our identity is, first of all, a call towards a goodness which must be pursued. Aristotle defines identity as a readiness for action. He calls it a “starting point”: from the moment of our conception in the womb we have the capacity to thrive, while actualizing this capacity is the journey of a lifetime. The destination—our perfection—is as fixed as a lighthouse, but this doesn’t make us any less free in pursuing it because perfection is the purpose of freedom. Our being, with its aspirations, weaknesses and complex union of body and soul, can’t be changed to serve other ends; we can’t alter human nature to further medicine, advance the arts, or stop wars. The constraints of the puzzles we solve in life are set by, rather than imposed on our nature. This makes our identity and our pilgrimage to fulfill it free, subject to nothing but itself and its author, God. It also means that the knowledge of what we are and of what goodness means—a knowledge pursued in the liberal education—is essential to freedom. People don’t find liberation by removing every constraint, but by learning and embracing the essential constraints, journeying towards what is best for them. Seeing the world truly is an invitation to set out boldly towards the good.

One of Solzhenitsyn’s reproaches to the Russian people is that they “didn’t love freedom enough,” causing apathy and cowardice in the rise of Soviet power. It isn’t a coincidence that Stalin targeted the educated, seeing them as a special threat to his regime. Study which uncovers reality as a unified whole in light of the stars safeguards a man’s freedom by allowing him to order his life for his highest good. My peers from St. Mary’s have gone on to start families, work in trades, enter careers, pursue higher education, or enter the religious life. We were educated, however, for no particular vocation except one: a friendship with truth in the Person of Christ.

In the years since I’ve left St. Mary’s, I’ve become grateful for something which I hardly noticed at the time. It is the strong sense of humor of our professors and priests, and their inability to be scandalized or to take offense. Laughter is easy in an atmosphere of freedom because it flows from trust: trust in one another, in the good of the present, and in the promise that truth will end up on top. Our classrooms were places for hearty attitudes and hard laughter because we knew that the truth was trustworthy. It wasn’t sensitive or overly delicate. Remembering this has given me confidence in moments when the principles I learned at St. Mary’s have been challenged in broader environments. While I might feel shaken and inexperienced, I can rest knowing that my mentors passed through the same challenges, and after years of trial, have preserved and refined conviction in the truth which is deep enough to be merry.