“Beacon on the Plain”: Saint Mary’s

During the summer of 1967, in response to falling numbers of vocations, the Jesuits left Saint Mary’s, Kansas, abandoning the site they had established almost 119 years before. In turns, an Indian Mission, a boarding school for boys, and a seminary—the campus, carved out of the prairie year by year until it was a self-sustaining complex, then fell prey to the blistering summers and freezing winters. The buildings that had housed and educated thousands of boys and men and theologians were scarred by vandalism and neglect. In the middle of campus, the old Immaculata Chapel, in which some 1,000 ordinations took place, was empty, the sanctuary lamp extinguished.

The history of the current Saint Mary’s is intertwined with the dark days that followed; the post-Conciliar period with the imposition of the New Mass, a time when the Church seemed to change overnight, and when things sacred to our ancestors were largely rejected. As the young Society of Saint Pius X (SSPX) was reaching out to nascent traditional Catholics in the United States, the faithful were already looking for places not only to take refuge but also to lay the foundations for renewal. In January 1978, Fr. Hector Bolduc, SSPX, based in Dickinson, Texas, began coming to Topeka to offer Mass in the home of the David Gayner family. Later, when they showed him the nearby Saint Mary’s campus, he predicted that the Society would acquire the property. That May, Archbishop Lefebvre, making the first of eight visits to Saint Mary’s, inspected the grounds, and especially admiring the Immaculata Chapel. He urged Fr. Bolduc to continue negotiations for the property, working and praying to find the means to turn Saint Mary’s into a center of traditional Catholicism. For the Archbishop, the chapel was a symbol and a hope, a hope that this work, here in the heartland, would launch a Catholic renaissance.

The Resurrection of Saint Mary’s

The resurrection of Saint Mary’s is a story that is familiar in many places, especially in the west. While the altars and furnishings of venerable churches were smashed and trashed to update the architecture to a new vision of prayer, other places were sold or left abandoned. For those who inherited these places, it was like the Dark Ages; they experienced how difficult it is to restore that which is easily destroyed. What is more, it is one thing to renovate a physical building; it is far more difficult to restore a parish, a teaching staff with a reliable curriculum, or a seminary that forms holy and learned priests. The battle of restoration in Saint Mary’s has been unceasing since the campus was formally acquired on June 23, 1978, the Vigil of St. John the Baptist. The material aspect reflects the immaterial: to revive and rebuild, to take up what has been cast away, to pass on what has been received.

With only a handful of volunteers, work on the physical campus began during the hot Kansas summer. As with the original mission in the mid-1800s, the primary goal was to establish a chapel and then a school. Only now, instead of building from scratch, there was the immense task of cleaning and repairing the buildings, the oldest of which being over 100 years old. Catholics from other parts of Kansas and Missouri devoted their weekends; some of these early volunteers moved to Saint Mary’s permanently and became the earliest parishioners. Other families, confident that Saint Mary’s would feature a traditional Catholic school in addition to a chapel, began moving into the town and surrounding areas. On September 8, 1979, the Academy officially opened, offering grades K-10, with grades 11 and 12 added over the next two years. Recalling that the old SMC had covered both the high school and college years, the new SMC was opened on August 31, 1981. Catholic families and schools, in the words of Bishop Tissier de Mallerais, “offer to God the raw material for solid religious and priestly vocations,” vocations that Saint Mary’s and the wider District have been blessed with over the years.

With an initial foundation in place, a tragedy familiar from the early years of Saint Mary’s struck: on November 8, 1978, a spark from an electrical short started a fire in the wall of the choir loft of the nearly restored Immaculata. The fire gutted the building, leaving only stone walls that later succumbed to the strong Kansas winds. While Archbishop Lefebvre noted that “the fire was a true catastrophe, a stroke of the devil,” the SSPX Superior General, Fr. Franz Schmidberger, encouraged perseverance, saying, “The physical rebuilding of the Immaculata will be the outward sign of the spiritual rebuilding in our own hearts.” In the meantime, the old seminary refectory was turned into a chapel where, year by year, the sacraments were administered to growing numbers of faithful. Over the past 40 years, Saint Mary’s has grown so large that rebuilding a chapel that seated 500 for a parish of now 4,000 does not make sense. On the Feast of Pentecost, May 31, 2020, the groundbreaking ceremony for the new Immaculata took place. This new church will be the largest in Kansas and the largest SSPX church in the world, a monumental material manifestation of the spirit of traditional Catholicism. 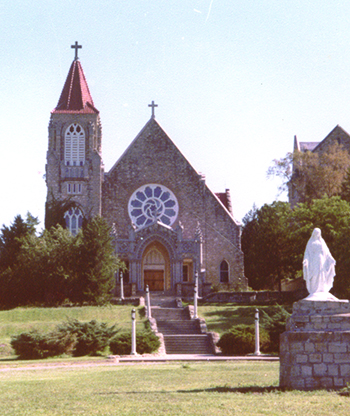 The Experiment of Tradition Continues

In the U.S. District, Saint Mary’s may be the largest sign, but is by no means the only sign, that what Archbishop Lefebvre called “the experiment of tradition,” has yielded fruit. Often accused of a backward isolationism by the world, Saint Mary’s is more a place of ideals than anything else. While there is a certain withdrawal from the corrosive effects of today’s culture (families being drawn to an authentically Catholic community with a vibrant parish and school), Saint Mary’s also requires engagement with the surrounding area: from growing businesses and cultural events to grand parish events during the year (a candle-lit Rosary procession, another large procession for the Feast of Christ the King, all of the Holy Week ceremonies, and other observances through the liturgical year).

Now, well into the second generation of the post-Conciliar era, it has often been observed that traditional Catholicism is a youth movement. Particularly for those who visit Saint Mary’s, one of the more remarkable features is the many children. As far back as 1979, during one of his sermons preached at the campus, Archbishop Lefebvre said, “I congratulate you with all my heart to see that you have so many children. We observe that half of the assembly here is composed of persons less than twenty years old. This is a sign, a sign of your fidelity to the Catholic Church, a sign of your fidelity to the commandments of God. I congratulate you, and I am sure that God’s blessings are upon you.” With over 100 baptisms a year and nearly 900 students enrolled in the Academy, Saint Mary’s continues to grow as a living contradiction to the culture of death.

Now, 50 years after the founding of the Society, which takes as its mission the motto of Pope Saint Pius X “to restore all things in Christ,” the heroic stand taken by traditional Catholic pioneers like Archbishop Lefebvre continues to bear fruit. As the long lines for Confession attest, Saint Mary’s is far from a utopia; as Eliot sings, we are those “Who are only undefeated / Because we have gone on trying.” We have, even in 2020, by the grace of God, the sacraments, the grace that sustained our ancestors in the Faith. In Saint Mary’s the swish of cassocks is still heard, and sisters in full habit are still seen walking to teach catechism. The old ways that the modernists thought to be finally buried have been preserved and are being passed on. In this way, Saint Mary’s is, as some of the words from our school hymn proclaim:

Ennobled and by truth remade,
Forever hopeful we remain:
Assisted by our Mother’s aid
Celestial joys at last to gain—

Full of gratitude to Our Lord and Our Lady, Who have not abandoned us, their devoted servants, we celebrate this anniversary of the SSPX and pray ad multos annos.