The Earthquake﻿ Priests: Watchmen for Humanity

Hardly anyone in the population knew that the alerts about the approaching earthquake came from laboratories where black-robed priests bent over oscilloscopes, wavemeters, and vibrographs. The US Coast and Geodetic Survey in Washington DC gratefully received teletyped daily reports from their seismological laboratories. “Bless those who persecute you﻿”: their silent service benefited even those countries that had constitutions explicitly forbidding their entry such as Norway and Switzerland. Indeed, Jesuit contributions to seismology have even led to it being called “the Jesuit science.” According to a former president of the British Seismological Association, the Jesuits at one time dominated the field of seismology in the U.S.A: in 1954 while the US Government had eight seismological stations, the Society of Jesus had 18 within the country and an additional 10 elsewhere.

Frederick Louis Odenbach pioneered Jesuit involvement in 1908 and purchased seismographs for 15 of the order’s institutions. They soon began gathering data and became the first professional seismographic network in the world. From their ranks came James Macelwane, one of the most renowned seismologists of all time, in whose honor the American Geophysical Union annually awards a medal to promising young geophysicists. 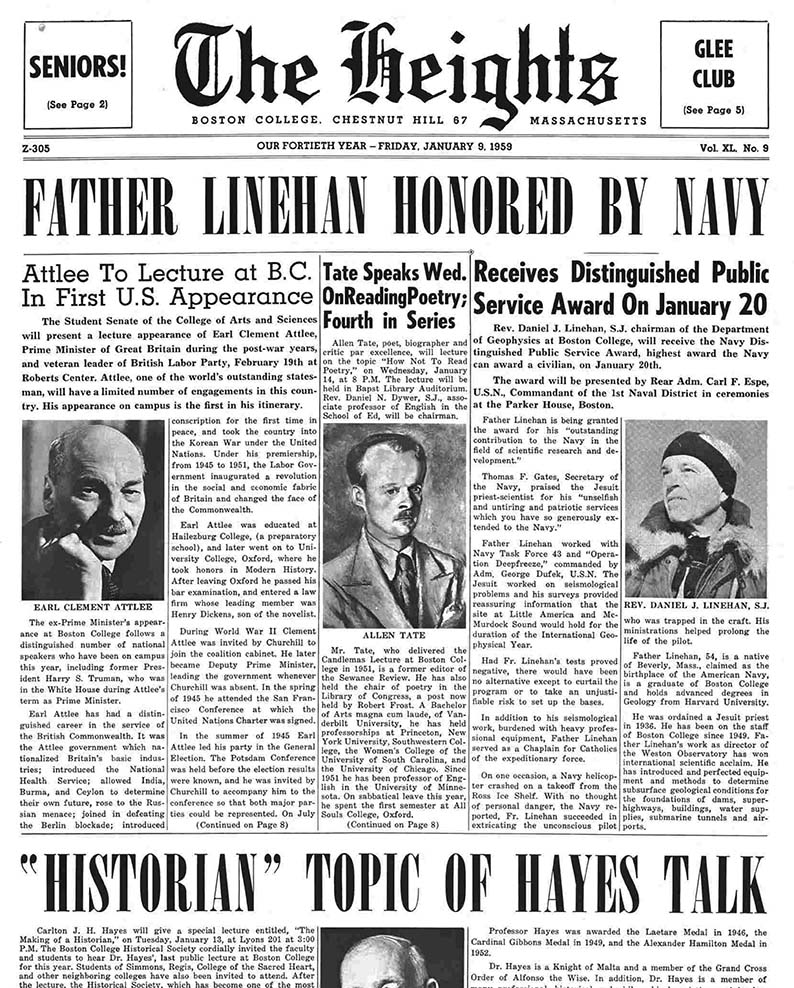 In the 20th century field of seismic prospecting, one of the pioneers was Daniel Linehan who became known as the “earthquake priest” for his discovery of the “T” phase, one of four types of earthquake waves. He was also the first scientist to test the theories of shallow refraction. On all continents and at both poles he conducted research. As a member of three U.S. Navy expeditions to the Antarctic he measured and mapped the polar ice cap. He also went on a daring expedition to the North Magnetic Pole within the Arctic in 1954. In 1969, he was again on the cutting-edge with his conference “Seismology in Space Mission Planning,” given at the Second Conference on Planetology and Space Mission Planning.

On all his scientific journeys, he was never separated from a gold-plated chalice on the bottom of which were inscribed key events of his life such as “First Mass at North Magnetic Pole 1954,” “First Mass at South Pole 1958.”

The famous photographer, Margaret Bourke-White, helped many catch a glimpse into the soul of this priest-scientist in an article published in Life magazine. She narrated how she had followed him around during an entire day filled with scientific activities but which had begun with the Sacrifice of the Mass. At sundown the priest had remarked to her:

“...Today, when I read my seismograph there were only two who knew that rock was down there under 60 feet of water. Only God and I knew. And to think this is the same God who came down to our altar this morning, the same God who made that rock, who made all the rocks in the world. I would give up all my seismology to celebrate one such Mass as you came to this morning…that is God. And I held Him in my hands this morning. That’s why I’m happy.”

The Typhoon Priest: He Saved a Million Lives

Dubbed “the Scientific Superman” by one scholar, Fr. José María Algué, (1856 - 1930), one of the greatest meteorologists in history, was born in Manresa, Spain.

In 1871 the 15 year-old began his preparation for the priesthood in the novitiate of the Society of Jesus at Andorra, amid the Pyrenees. After advanced scientific studies in the U.S.A., he began work in 1894 at the Manila Observatory in the Philippines under Fr. Federico Faura. There he published the landmark study for navigators, The Cyclones of the Far East. In 1898, after the Battle of Manila Bay, American military leaders, recognizing the importance of the priest’s work, arranged for Admiral Dewey to meet with Fr. Algué on board the flagship, the Olympia. This meeting ensured the support of the new rulers for the Observatory which was renamed the Philippine Weather Service.

José María Algué became the leading meteorologist in Asia. In 1900, he published the most up-to-date atlas of the Philippine archipelago. 1905 saw the foundation of the first weather stations around the nation: during his directorship he would launch 159, along with two magnetic and seismic stations. Every year he sent out an average of 20 warnings about typhoons to an area that included Tokyo, Hong Kong, and Shanghai.

The priest invented three instruments: the nephoscope, an instrument for determining the direction and speed of cloud movement; the microseismometer, a type of microseismograph that produces a graphic record of amplitudes or periods, or both, of small earthquakes; and finally, his most important invention, the barocyclonometer, a barometer with a cyclone-detecting apparatus known as the cyclonometer. The barometer will tell of an approaching storm but the cyclonometer will tell even at a distance of several hundred miles the direction in which the center of the storm is moving.

On August 18, 1912, the New York Times published an interview with Fr. Algué:

Noted Weather Prophet of The Far East Here to Help Us

“Fr. Jose Algué of the Philippine Weather Bureau tells of his device for detecting typhoons that has been adopted by the US Government. He has warned people on land and sea of the approach of storms for the past 20 years. […]He has saved so many lives that trying to add them up is useless. Let them go at a million: the probabilities are that they total up more than that.

“He is Fr. Jose Algué, a Spanish Jesuit priest, Director of the Philippine Weather Bureau at Manila. For over 20 years all his waking hours have been devoted to that hobby of his, life-saving. He has pitted himself manfully against the most dreaded of Far Eastern calamities, the typhoon. By patient systematizing and ingenious inventions he has pushed forward, step by step, until it looks now as if he at last worsted the old typhoon demon that used to sweep sea and land at will, tearing up villages, towns and cities in his path, strewing the beaches with shattered hulks and the corpses of seafarers.

“Perched in the Manila observatory, Fr. Algué schemed and calculated and pondered and jotted down figures and erased them again until at last he rose from his chair one day with the dream of his life realized. He had worked out the idea for making an instrument that would tell not only of the approach of the typhoon but of the course it would take. By means of this, Fr. Algué figured, a skipper would be able to dodge the typhoon and compel it to spend its violence miles away on the open sea, instead of enveloping his ship in its howling, blinding vortex, tearing out masts and funnels and cabins, and hurling him and his men, like as not, to the bottom.

“That instrument, which its inventor calls the barocyclonometer, is now in use on upward of 1,000 ships that sail the waters of the Far East, and it has carried the fame of its inventor, already great in Manila and throughout the Philippines, to the remotest corners of the Orient. And now Fr. Algué is in this country, in answer to a summons from the United States Government, which is going to adopt the barocyclonometer on American warships. For the past month he has been busy in Washington and Havana, adapting his Pacific calculations for use on the Atlantic, where he expects that a modified form of the instrument that has been so successful in the East, will be equally efficacious in warning mariners of the approach of hurricanes and other storms, and making it possible for them to slip out of harm’s way.

“Fr. Algué was in New York last week. He was just back from Washington, where, with the help of Captain Jayne, Superintendent of the Naval Observatory, he had thoroughly satisfied the government as to the value of his invention. Yesterday, he sailed for London, where the first barocyclonometer for use on the Atlantic will be made under his personal supervision. When that is done the busy priest will take the long journey back to Manila, and once more devote himself to running up his danger signals for the protection of seafarers and landlubbers, and send out his code messages of warning to dozens of places that would otherwise be at the mercy of the typhoon, and doubtless stick to this splendid life work of his till the end of his days. Then, let us hope, he will rest as one who has used his life for the benefit of his fellow-men ought to rest.

“But, fortunately, he looks as if that day were still far distant. He was hale and active, and there was vim in his gestures and steadfastness in his eye as he sat beside a TIMES reporter in the reception hall of St. Francis Xavier College, in 16th Street, where he stayed while here, and told about the quick work of warning that must be accomplished within the space of a few hours if lives are to be saved. For, in spite of vigilance and ingenuity, the typhoon is still a monster to be dreaded. It is only a few years since he swept, unheralded, into the harbor of Hong Kong, packed with everything that floats, from ocean liners to Chinese junks, and tossed them about like playthings, piled them up on the shores like kindling wood, and drowned or battered the life out of 10,000 human beings. […]

“Life is better than gold—better than millions of money!” he exclaimed. “Life is the greatest thing there is—you can’t restore it when once it is gone. And—now I have an appointment,” he remarked abruptly and shook hands courteously with the reporter and accompanied him to the door, and then vanished into the interior of the college with knit brows, probably revolving more mathematical formulae in his mind, probably meeting and overcoming an imaginary typhoon.”