The Sin of Scandal Committed by Priests

As Seen by Archbishop Lefebvre

“By definition, scandal is an action of lesser consequence that leads another to sin which is an occasion of spiritual ruin.”—Archbishop Lefebvre quoting St. Thomas Aquinas (Summa Theologica, II. II, q. 40, a. 1-3).

Scandal is a sin against the virtue of charity to our neighbor, “because charity commands us to watch over the salvation of our neighbor” (ibid).

“The scandal of secularism is the greatest because it gives the most detestable example.” An entire society, an entire nation which has become atheist﻿ic by an anti-Christian or atheist﻿ic political regime…﻿On the other hand, the Archbishop liked to say, a nation, a State where the laws and customs are deeply Christian, and therefore Catholic, saves souls. The good examples given by Catholic leaders of State give these immensely edifying examples to a whole nation.

“I remember,” said Archbishop Lefebvre, “having arrived at the seminary in Rome with fallacious ideas. I was persuaded that it was good that the State was separate from the Church, that the State doesn’t call itself Christian. It was in listening to the conversations of my older classmates, but above all my professors and the rector of the seminary, that I understood that I was liberal! That it was necessary for me to carry out my conversion! I was, unknowingly, a victim “scandalized” by the ambient secularism which reigned in France at that time.

It was the encyclicals of Popes Gregory XVI, Pius IX, Leo XIII, St. Pius X, etc., that helped conform my judgment to the thoughts of the Church. I understood that I had to judge history, events, and men in the light of Our Lord Jesus Christ and His reign.”

Scandal Given by the Priest and its Remedy

“There are also scandals given by priests: lack of piety, negligence in the ﻿church, poor upkeep of altars, of sacred linens﻿, etc. Religion, for the faithful, is worth what the priests are worth.

There are also imprudent behaviors committed by our priests: undignified gestures, foul language, or alas, grave sins like alcohol addiction, anger, and violence, which can destroy a parish after having destroyed the reputation of the priest.”

Since the 1970’s, the marriage of this or that priest from a parish scandalized the faithful, but since the 1980’s, Archbishop Lefebvre heard the fruits of infamous vices practiced within the Roman clergy itself. After sharing the topic of the increasing corruption of clerics to his seminarians, he indicated the remedy to them: the sanctity of the priesthood, the virtue of chastity, of sobriety, of the prudence of the priest. He saw the rotten fruit of Vatican II in these disordered priestly works: “They no longer have,” he said, “they no longer have the grace that is necessary for taking up their celibacy!”

The Common Life of the Clergy—Remedy for Sacerdotal Disorder

It is here that Archbishop Lefebvre insisted upon the importance of common life for the clergy. It was a sort of charism that the Archbishop had in creating what he called “the priory” of the priestly Society of Saint Pius X. He detailed the advantages and the exigencies:

“It is a common life of habitation, of prayer, of charity, of mutual support, in which each is responsible for the good example he gives. Each priest is required to have discreet vigilance over the regular presence of his confreres in the moments of prayer, above all during the common morning meditation under the paternal authority of the Prior. It is how I lived in Gabon, then in Dakar with the Holy Ghost Fathers. Thus, normally all is lived peacefully. The regulation of common life in the seminary also applies to the life in a priory. The clergy is trained in the imitation of religious like the missionary priests of St. Vincent de Paul or the ‘Messieurs of ﻿Saint-Sulpice,’ to participate with delight in a life in common at table, at prayer, in the apostolate. This is a sort of paradise on earth for the priest.”

If I may give an example, I would mention a number of priests whom I knew in my adolescence. I would say that all, without exception, sustained and nourished my desire to become a priest like them: A priest named Mary celebrated the Sunday Mass at the church of Saint Sulpice in Paris—dialogue Mass in Latin and facing God—with an overwhelming piety; a priest named Leparoux was constantly in the confessional like another Curé of Ars, seated beside his penitents, young and old; a good priest, Fr. Gillet, preached the doctrine of Christian virtue in our catechism.

Later, desirous of entering the seminary but not knowing where, I met the venerable and dear Fr. Louis Coache, in his country parish ﻿in Montjavoult. He told me quite simply about his life of mental prayer: “I spend part of my time in the church before the tabernacle; I am the guard dog of Our Lord: I look at Him and He looks at me.”

And my dear high school chaplain! He was all-encouraging with a kind voice among our distractions and troubles. He nourished our souls once a week by showing us the apostolic zeal of St. Paul in his travels, storms, flagellations, imprisonment, fastings, and watchings.

Nothing impure or harmful appeared in the teaching of the evangelical beatitudes which was the program of our second year of “catechism of perseverance” after confirmation. Everything encouraged us to live a holy and missionary life.

The Edification Given by Model Professors

I will finish by giving some memories from my dear seminary of St. Pius X in Ecône during the years 1971-1977. Archbishop Lefebvre desired that the Swiss Canon, Fr. Berthod, should be rector. He was a theologian, a previous student of Fr. Santiago Ramirez, O.P. in Fribourg, a shy and likeable moralist who was faithful to St. Thomas “durch und durch” [through and through]. There was also Fr. Edward Guillou, a Benedictine religious from Paris penetrated with liturgical piety, who denounced to us the anti-liturgical heresy of the modernists.

I had the dear Fr. De la Presle as spiritual director, a gentle Discalced Carmelite, who introduced me to the exigencies of the love of God according to St. John of the Cross. And the delightful Dominican Fathers of Fribourg: the teacher of scripture Ceslas Spicq, who exposed the important points against the menacing allegorical modernist. And the dogmatician, Thomas Mehrele, who allowed us to reach the depths of St. Thomas in his Latin text. He also denounced the heresies of Karl Rahner concerning the mysteries of the Incarnation and the Redemption: two religious of exemplary piety whom we would only approach with the greatest respect for their knowledge and orthodoxy. However, the jokes and holy freedom of expression that these men made from time to time would never have dared to be expressed from the pulpit of the University of Fribourg…

The Example of Our Venerable Founder

Above all, our venerable founder edified us by the care of his cassock, and his impeccably polished shoes, which were reflections of his orderly and gentle soul, but were also reflections of his firmness, which inspired abnegation, poverty, and flight from the spirit of the world.

He made order reign everywhere—in the hallways, the dormitories, and souls. He delivered spiritual conferences in the evenings without an air of public speaking. The Archbishop showed us the Person of Our Lord Jesus Christ, His knowledge, wisdom, Cross, renouncement, priesthood, zeal for souls, and the sacrifice of the Mass; the Archbishop was a constant source of edification for us.

An Atmosphere of Manly Sanctity and Vigilance

Without a doubt, our venerable Archbishop ﻿listed the scandals within the Church. “Those scandals concerning false doctrines, foremost, since the Council; those of the sins of imprudence on the part of priest﻿s: words or gestures without self-mastery, those scandals with regard to children or young women, intemperance at table, flirtation with women, pseudo-dating in the confessional as opposed to true spiritual direction, etc.”

But immediately after exposing these scandals, he re-fixed his gaze and those of the priests upon the Blessed Sacrament.

“We should seek to create within our houses, priories, schools, and seminaries, an ambiance of sanctity, zeal, fervor, charity, and generosity. We must follow this ideal by encouraging what is good and virtuous and chasing away scandal. There will certainly be difficulties, exercises in patience with charity, perseverance and firmness; one must reprimand and correct, but never endure tolerance regarding scandalous actions by immediately removing those that have caused the scandals.”

He detailed the diverse kinds of scandals to drive out among clerics.

“There are scandals of weakness, imprudence, clumsiness; these are less grave. One teaches young clerics to be the masters of their affections, to avoid every gesture, or every word of affection toward children and young women: a brief glance and a firm handshake shows manly uprightness. Next, there are scandals from the sins of pride, the spirit of rebellion, a deceptive spirit—one that does not understand obedience. These scandals cannot be tolerated long-term without being a grave nuisance to the community. Finally, there are grave moral faults; if they appear more or less accepted, they go on to provoke a chain reaction of falls which poison a house, a diocese—one must attend to these without delay.”

But our founder never ﻿cited scandals without proposing the remedy. Self-mastery, renouncement, priestly virtues, virtue of the holy sacrifice of the Mass, immolation of the priest with Jesus—priest and victim﻿, the aid of the other sacraments, spiritual direction, spiritual retreats and of course a tender and profound devotion to the most Blessed Virgin Mary, mother of priests. 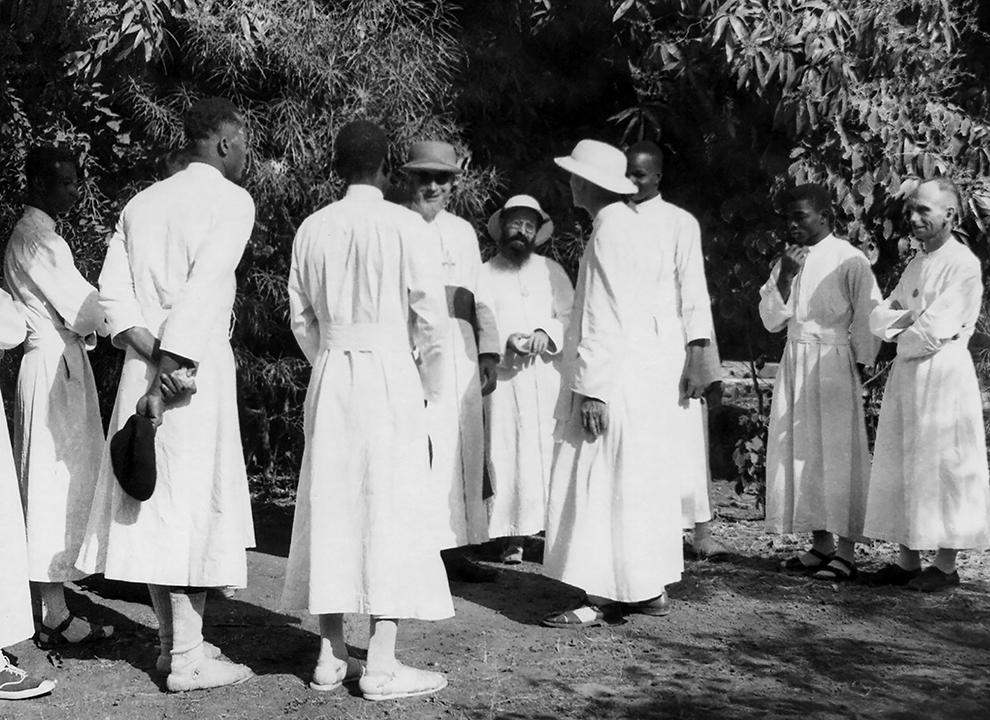 “We should seek to create within our houses, priories, schools, and seminaries, an ambiance of sanctity, zeal, fervor, charity, and generosity. We must follow this ideal by encouraging what is good and virtuous and chasing away scandal.”
—Archbishop Lefebvre with his priests and seminarians in 1957