In 787 A.D., the Seventh Ecumenical Council of the Catholic Church was convoked at Nicæa. The task of the Council was to condemn the heresy of iconoclasm, and to reverse a heretical council that had been convoked at Hieria in 754.

During the sixth session of Second Council of Nicæa, the decrees of the robber council were read; orthodox answers were then given by a deacon and an imperial chamberlain named Epiphanius. One of Epiphanius’s answers stated the indispensability of tradition in sacred art:

“The composition of religious imagery is not the painter’s invention, but is approved by the law and tradition of the Catholic Church. The tradition does not belong to the painter; the art alone is his. True arrangement and disposition belong to the holy fathers, who established it.”

Truly religious imagery requires more than the good faith of the artist, more than the nobility of his material and the excellence of his craftsmanship. Simply put: if it is not traditional, it is not sacred art. The Council stated this principle beautifully, but it did not leave artists detailed instructions for the arrangement and disposition of pictures. Presumably, the Council Fathers believed that the artistic tradition itself was a sufficient guide.

The Council of Trent also addressed the subject of religious art, but it did not leave artists detailed instructions either. Its decrees merely forbade within churches any doctrinally false, misleading, or lascivious pictures and statues; they required episcopal approval before the display of any unusual image.

The censorship undertaken by the influential Bishop John Molanus in the late 16th century went far beyond these short and unspecific instructions and subjected the whole tradition of sacred art to his critical judgment. Molanus was blind to the symbolic order in medieval art; he condemned every traditional composition that he did not understand, which amounted to nearly all of them.

Even greater æsthetic and religious upheavals occurred in the following centuries, leaving a bewildering variety of religious art, its arrangement, and disposition seldom the same from one picture to another. Beholding this, it is tempting to say that all these different ways of composing religious imagery are good in their own way, and that an artist may choose whichever he likes to imitate, so long as he does so with pious intention. But to hold this view is to oppose the Fathers of the Second Council of Nicæa.

To attempt to reconstruct a pure artistic tradition from the early Church, or even one from the time of the Second Council of Nicæa, would be dangerous and impossible given the incompleteness of surviving artistic evidence. During the centuries of Roman persecution, Christian art was necessarily cryptic. The vast majority of religious imagery made over the next five centuries was destroyed in the two iconoclast crises. More yet was lost to war and revolution, theft and vandalism, rust and moth, and misguided renovation. 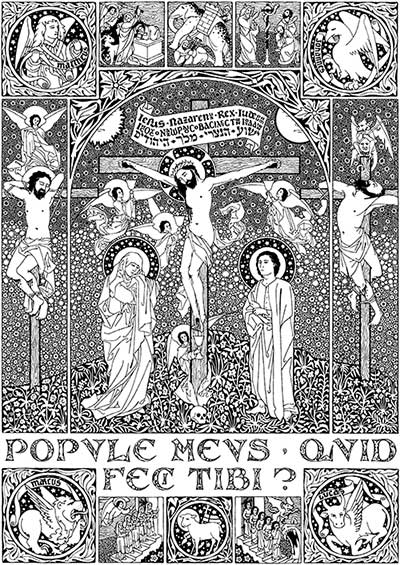 How, then, is an artist working in the present day to proceed, if he wishes to uphold the teaching of the Second Council of Nicæa? As a professional artist myself whose specialty is religious drawing, this is not an abstract question but a practical one that I must answer in my everyday work.

I believe that my first duty is to follow an ancient and enduring composition whenever it is apparent; one example is the association of the four Evangelists with the four winged creatures that appeared to the prophet Ezekiel and later to St. John. The man represents St. Matthew, the ox St. Luke, the lion St. Mark, and the eagle St. John. In art, the man and the eagle are usually given higher position, for the Evangelists they represent received their knowledge from direct witness rather than hearsay.

Commonly, I am required to choose between different models of composition without knowing for certain which is more authentic. Commonly, I am required to draw things that have no exact precedent in Christian art. Then, I must appeal to the law of worship and the writings of the Church Fathers to guide my decisions. Artistic tradition has the same source as patristic tradition and liturgical tradition; while artistic tradition does not have so exalted a place, it ought to corroborate them and operate with the same principles.

The arrangement and disposition of sacred art belong to the Holy Fathers when they say the same things as the Holy Fathers in the same manner. Symbolism pervades Patristic language, whether written or painted; this is nowhere clearer than in its juxtaposition of scenes from the New Testament with their Old Testament prefigurements. To quote the French art historian Emile Mâle:

“God who sees all things under the aspect of eternity willed that the Old and New Testaments should form a complete and harmonious whole; the Old is but an adumbration of the New... In the Old Testament truth is veiled, but the death of Christ rent that mystic veil and that is why we are told in the Gospel that the veil of the Temple was rent in twain at the time of the Crucifixion... This doctrine, always held by the Church, is taught in the Gospels by the Savior Himself: As Moses lifted up the serpent in the wilderness, even so must the Son of Man be lifted up.”

By the height of the Middle Ages, encyclopedic compilations of Patristic wisdom expounded the symbolic meaning of every scriptural passage. For my own art, I rely on two late medieval summaries of the exegetical tradition, composed more of pictures than words: The Biblia Pauperum and the Speculum Humanæ Salvationis. These match the most important events in the life of Jesus Christ with their appropriate prefigurements. It is from these that I know to associate the Crucifixion not only with Moses and the brazen serpent, but also with the sacrifice of Isaac and the death of Eleazar Maccabee beneath a war elephant.

As far as I can tell, this last prefigurement was mentioned in no work earlier than the Speculum Humanæ Salvationis. But the Speculum’s author did not contradict the ancient exegetical tradition; rather, he progressed it according to the established and most beautiful order of growth. The symbol was latent in the event from its occurrence; the manner of thought that revealed it was taught by Jesus Christ Himself.

The wound is almost invariably depicted on Christ’s right side, for it was from the right side that Adam’s rib was taken. To the right side of the Cross (from Christ’s perspective) appears the symbols of the new covenant: The Virgin Mary, St. Dismas the Good Thief, and the sun. The moon, whose indirect light represents the old covenant, is to the left. This is a theological lesson, not a record of the day’s astronomical positions.

A similar lesson is taught in images of the Resurrection. Before the 13th century, the Resurrection rarely appeared in sacred art. The older practice was to depict the holy women visiting the tomb, for this is the story read at the Mass of Easter Sunday. The image of the Resurrection itself might be denounced as a novelty did it not illustrate an ancient exegetical tradition, one that is revealed by a curious detail. Emile Mâle explains:

“In contrast to the Gospel narrative which tells how, after the Resurrection, the stone was rolled away by an angel on the morning after the sabbath, Christ is almost invariably shown rising from a tomb from which the stone has already been removed. The old masters, ordinarily so scrupulous and so faithful to the letter, had a reason for thus uniting two distinct events. There is not the least doubt that they wished to recall the deep significance which was attached by the Fathers to the removal of the stone. The stone before the tomb was in fact a symbol. It is, says the Glossa Ordinaria, the table of stone on which was written the Ancient Law—it is the Ancient Law itself. As in the Old Testament the spirit was hidden beneath the letter, so Christ was hidden beneath the stone.”

When sacred art is considered symbolically, in light of the Church Fathers and the law of worship, its eternal meaning appears. At least through the Middle Ages, religious artists followed the true and legitimate rule of progress articulated by St. Vincent of Lerins: Mature age ever develops in the man those parts and forms which the wisdom of the Creator had already framed beforehand in the infant.