Gilbert Keith Chesterton (1874-1936) is rightly praised among Catholics for his outstanding contribution to the defense of the Catholic Church and Faith. He was indeed a “gifted Defender of the Catholic Faith,” as cardinal Eugenio Pacelli, the one to become later pope Pius XII, stated in a condolences telegram sent to the archbishop of Westminster when Chesterton passed away. In fact the Holy See recognized him as such even before he died, as altogether with Hilaire Belloc they were awarde﻿d with the Order of St. Gregory the Great for the services they both rendered to the Catholic cause. Thus Chesterton should be read, even more than he is justly acclaimed, yet some readers may find him obscure and somehow eccentric. And they are probably right in feeling so.

So how to start reading Chesterton without getting discouraged? Of course you may try to read one of his books, perhaps get addicted with Chesterton as many do when they discover him, and then you should easily go through his more difficult or less appealing writings. But you may also be rebuked at the very beginning, and then, what to do? Let me try to sketch some “instruction manual” for getting into Chesterton’s opus, preceded by a glimpse on his religious and literary evolution.

Chesterton was above all an observer seeking for truth about man and his destiny. An honest but autonomous and self-educated genius, it took him really a long time to reach the Catholic Church and get deeply influenced by the clarity of its doctrine. This transformation appears through his writings as well. Educated in a vaguely Christian family, he first became an agnostic while a teenager. Then, falling in love ﻿with Franc﻿es Blogg by the end of the 19th century, a girl brought up by Anglo-Catholic nuns and sincerely Christian, though Protestant, helped him to rediscover the Christian Creed as stated by the Council of Nicaea, yet without an attachment to a particular institution, especially not to the Catholic Church. At that time the heresy of Modernism was struggling not only within the Catholic Church, but also undermining more conservative f﻿actions among Protestantism, to which, formally, he was adhering. But as he had a Catholic understanding of the Creed, he obviously criticized scriptural interpretations leading to the rejection of the historicity of miracles, statements of purely human origins of dogmas or evolution of morals based on changes of human conscience within time. At the same time he was struggling with the great errors of his times (though very ancient for some of them)—Marxism, bringing all human activities to material purposes; determinism, claiming man has no free will; rationalism and positivism, forbidding God any intervention in the human history, especially through the miracles; but also imperialism (one would say today ﻿“globalism﻿”) or even racism. His clash with all those errors—and those who spread them—resulted in his first major book titled Heretics (1905). Then, pressed by his adversaries to state what his own views were, three years later he published Orthodoxy, exposing his beliefs on the human nature, the world, and ﻿Christianity. 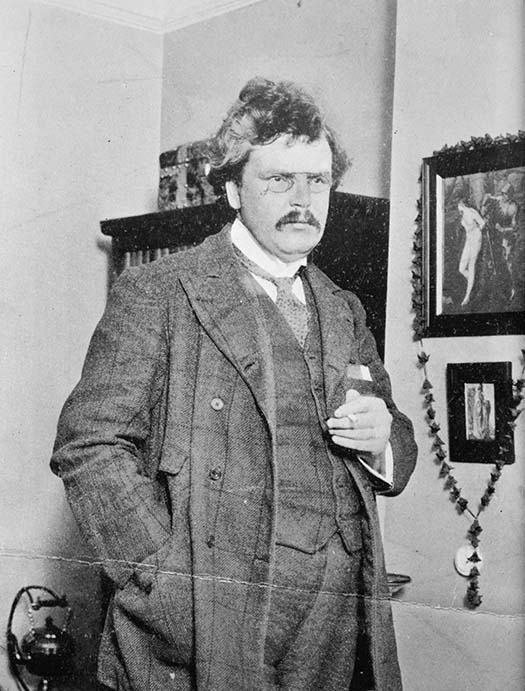 Both books contained witty reductions of his opponents and some brilliant intuitions on the concerned topics. Yet you may find Chesterton quite obscure when it comes to develop﻿ing those ideas in a form of a treat﻿ise. So﻿, did his conversion to ﻿Catholicism change something on that point? First﻿, let’s remark that h﻿e was already on the way to the Catholic Church in 1911, when “he was more than ever inclined to think, though he had not yet been admitted, that possibly the claims of the Greek and Anglican Churches were less near the truth than the Roman Catholic Church” (William Oddie, Chesterton and the Romance of Orthodoxy: The Making of GKC, 1874-1908, Oxford University Press, p. 382). He also, meanwhile, developed sincere friendships with some Roman Catholic priests and admired their deep knowledge of human psychology﻿. He was surely under their influence, yet he did not definitely embrace Catholicism until 1922. So be patient if you are praying for a conversion of a good a﻿nd sincere fellow, as Chesterton was one as well. And though, as he often admitted, the Catholic Faith and thought unlocked to him great intellectual perspectives, yet this process of further clarification and illumination of his mind also took some time.

For instance﻿, The Everlasting Man, published in 1925, is his great apologetic masterpiece in the defense of the divinity of Christ and it contains two simple intuitions: man cannot be just an animal as he shows signs of spirit; Christ cannot be just a man a he shows signs of divinity. Yet the process of inducting these two clear ideas in a long and obscure demonstration may be found startling by readers.

Now, take his polemical essays with Modernists and Protestants from the late 1920﻿s and 1930s, like those which were published in two apologetic books: The Thing: Why I am Catholic (1929) and The Well and the Shallows (1935). They a﻿re ea﻿sier to go through than The Everlasting Man. This means, I think, that if you want to receive the ﻿benefit of Chesterton’s apologetic genius, it’s much better to start with the books he wrote in the last decade of his life, when he was already under influence of Catholicism. I can also recommend my booklet Protestantism As Seen by G. K. Chesterton. Its text is composed ﻿80% of his quotes extracted from several dozen of his books, and above of all, from The Thing and The Well and the Shallows. I﻿﻿ am not really recommending my own work, but, as a scholar who spent several years studying his writings, I recommend to you his thought presented in a synthesis which is supposed to bring you altogether the best of his polemics on this topic. Furthermore, this work exposes the evolution of Protestantism through the ﻿centuries and also explains how it eventually versed into Modernism and ﻿totally rejected the Christian Creed, which in the current crisis of the Faith is ﻿an even ﻿greater danger than in times of Chesterton’s polemics.

There is also another, more chronological, way to approach his apologetic thought without taking ﻿too much risk of being rebuked by some of his textual obscurity. He also wrote short novels, and his novels are simple, present an irresistible humor, and even though they have some defects from a literary point of view (people are usually disappointed by the way he ends them), they actually expose vivid dialogues in the fields of religion, politics, and morality. While The Ball and the Cross (1909) depicts a very curious struggle between the Faith and un﻿-Faith, the Flying Inn (1914) is an incredible prophecy about Islam invading the Western world. The Man Who Was Thursday (1908) brings in a solid axiology in which heresy is shown be the worst sin. Manalive (1912) is a great antidote to the Puritan poison spilled by Calvinism on the Anglo-Saxon countries. You won’t waste your time with those readings as these comical stories are always hiding mini﻿-essays disguised in the ﻿form of﻿ dialogues.

To finish, we may say that through a general recommendation of his works, the Church find﻿s it good and profitable to read Chesterton. Personally, I think that even while some of his books written before his conversion contain some doctrinal errors or inaccuracies as shown by a French Thomist priest﻿, Joseph de Tonquédec, they aren’t in fact harmful to readers. But the most important thing to stress is the fact that he somehow foresaw the actual errors mankind would be confronted with. Many were already present in the form of false principles in his time﻿.

Thus, one could apply to him what he himself wrote about William Cobbett: “In a word, he saw what we see, but he saw it when it was not there. And some cannot see it—even when it is there. It is the paradox of his life that he loved the past, and he alone really lived in the future. That is, he alone lived in the real future. The future was a fog, as it always is; and in some ways his largely instinctive intelligence was foggy enough about it.” And secondly, not only did Chesterton foresee those errors, but he also refuted them in a manner reachable to the common man. Here, again, what he wrote of Chaucer, another genius﻿ of past times, was also true about himself: “They have not bothered to invent a small philosophy, but have rather inherited a large philosophy. It is, nine times out of ten, a philosophy which very great men share with very ordinary men. . . . The great poet only professes to express the thought that everybody has always had.” This thought, which everybody has always had, has a particular name: Tradition. Reading Chesterton will bring you better knowledge of its principles.