Modernism as it appeared in Europe at the end of the 19th century was the outpouring of the liberal Protestants brought into Catholic soil. Crossing the Rhine, the vague heretical ideas came rushing into France under the guise of criticism à la Kant. Textual criticism was applied to Sacred Scripture, the privileged domain of early “Catholic” Modernism, although it espoused the philosophical and theological prejudices, namely agnosticism and immanentism.

Duchesne, in Paris, was particularly active in this domain and founded a scriptural review, the Critical Bulletin, in 1880. He preached the method of direct contact with the sources and of uncompromising severity in textual criticism. Father Alfred Loisy shone beside him as a brilliant disciple and the students’ favorite lecturer. Meanwhile, Renan, at the College of France, was busily occupied with tearing apart Holy Scripture, both the Old and the New Testament.

Eighteen eighty-three marked a watershed year for progressive exegesis, which suddenly fell under a stigma. It was the year the Catholic Institute broke with Saint-Sulpice. That year, Loisy, with his pure critique, broke with Vigouroux, who defended traditional exegesis. At the same time, he began making friends with the future leaders of the Modernist movement, with Laberthonnière and Denis, of the Annals of Christian Philosophy. Most notably, he met with the Catholic Baron Frederick von Hügel, who threw all of his influence, money and enthusiasm into fostering the Modernist movement from his home in London. Together with Duchesne, Loisy was initiated into Kantianism by Fr. Hébert, then director of the Fénelon School. Hébert had espoused the exegetical thesis which Loisy would later make his own: the Church, truth and things divine all evolve; the Gospel is pure legend and symbol. So it was that, little by little, Fr. Loisy let go of the traditional ﻿Faith. However, his professional situation waxed precarious as he was forced to leave the Catholic Institute under the pressure of the French bishops. In 1893, Leo XIII published Providentissimus, censuring both the Institute and Loisy for minimizing scriptural inspiration and claiming to detect errors in the Holy Bible.

In 1900, the liberal Protestant Harnack published What is Christianity? In it, he criticized Luther for only going half﻿way and not rejecting dogmas and rites altogether to rediscover, in its primitive simplicity, the authentic religion of Christ. The essence of Christianity had to be unburdened of its faded wrappings.

The work, though foreign and Protestant, interested intellectual circles. Loisy took up his pen all the more willingly that his own Christian synthesis lay waiting in a drawer. He gallantly stepped forward, taking up the challenge thrown down by the Berlin scholar with the publication of The Gospel and the Church, followed by Concerning a Little Book, its complement.

The evolutionist and symbolist declarations which were rampant within and which would be obvious to today’s reader, were camouflaged at the time behind an excessively subtle and ambiguous exposition. A clear affirmation was nowhere to be found. Every expression of subtle reserve in the French vocabulary had its place. A strange, disconcerting book, perfecting the art of insinuating conclusions without ever stating them outright. It was destined to dupe, and the dupes came in droves when it first appeared.

Loisy’s manifestos were grave enough to call for a pontifical document listing and condemning their errors. In France lay the epicenter of the cataclysm; from France would come the initiative for a response. Already in October 1903, the theologians Letourneau and Pouvier presented to Cardinal Richard of Paris, for submission to the Holy Office, a report. The Holy Office put Loisy’s works ﻿on the Index because “grave errors abound in these volumes, touching mainly on the primitive revelation, the authenticity of the evangelical facts and teachings, the divinity and knowledge of Christ, the resurrection, the divine institution of the Church, the sacraments.” They anticipated the Roman decree Lamentabili of 1907, where ﻿50 condemned propositions were taken from Loisy, the rest from Tyrrell and LeRoy. The last of them gives a taste of the whole: “Modern Catholicism can be reconciled with true science only if it is transformed into a non-dogmatic Christianity; that is to say, into a broad and liberal Protestantism.” 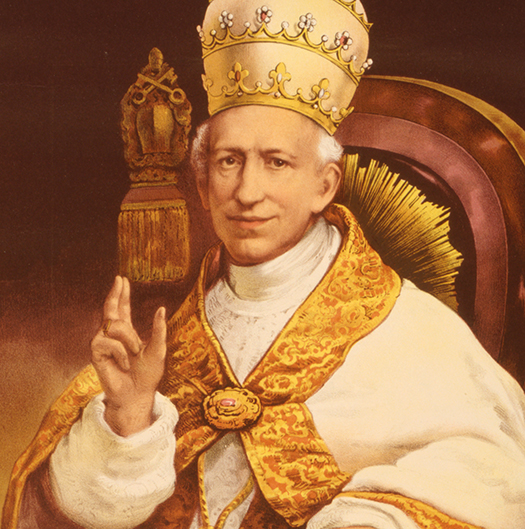 Modernism ﻿Outside of France

The eye of the Modernist hurricane was in France, but it wreaked considerable havoc in the surrounding countries as well—in Italy, as we shall see briefly in the next chapter, but also in England. Its most prominent representative was Tyrrell, a Jesuit; to him do we owe the theological synthesis of Modernism such as it would be condemned by Pius X. The advantage of Tyrrell’s theology over the works of his friends abroad—LeRoy, Blondel and especially Loisy—is that it draws theological conclusions without weighing itself down with dry philosophy or exegesis. Tyrrell did not bother with tortuous, oversubtle arguments but wrote clearly what he thought, since he considered himself safely hidden behind a pseudonym. Born in Dublin to a Calvinist family and himself a convert to the Catholic faith, he was carried along by his own personal mysticism toward a theology of intuition over intelligence, tainted with a certain Protestant individualism.

He was forging friendships with the liberal London set, particularly the Baron von Hügel, who put him in contact with European philosophers and exegetes. He abandoned dogmatism and scholasticism, professing an affinity for Blondel’s philosophy of immanence, whose conclusions he claimed to anticipate by a sort of spiritual kinship. Finally, he accepted wholesale the conclusions of scriptural criticism, all the more naively for his own incompetence in the matter.

In Italy, the torrent of Modernism flowing out of France and England was a rising tide. A fiery, sanguine national temperament ill-disposed Catholic Italy to intellectual innovation but made it quick to assimilate the newest imports from abroad. The Studi Religiosi appeared in Florence in 1901, touting the advances of modern science. Minocchi was the resident Scripture critic and the Barnabite priest Fr. Semeria wrote on the origins of Christianity; Buonaiuti, who had already earned a name for himself in Roman circles, arrived as an expert on religious philosophy. This last, only 24 years old at the time, went on to found the Rivista Storico-Critica delle Scienze Teologiche, treating with consummate eloquence topics as varied as religious philosophy and the history of dogma and religion. The great Italian novelty was Murri’s democratic movement, violent from the outset and spreading like wildfire. As early as 1905, Murri was translating the works of Tyrrell under a pseudonym. Moreover, all of these authors were in ﻿a sense but translators, taking the scholarly works published in other countries and restating them for the masses, with a new Italian flair and passion. One man of letters, Senator Antonio Fogazzaro (1842-1911), took it upon himself to give a voice to the various Modernist aspirations with his novel, Il Santo (Milan, 1905) and so awaken the present generation to the principle of adaptation. The novel—by no means great literature—brought together in a single volume the essential ideas of Blondel, Laberthonnière, Loisy, and Tyrrell.

Not only was Modernism spreading throughout Europe; the intensity, the density and the sheer quantity of the polemics surrounding the movement gave it all the earmarks of a crisis within the Church herself. Religious philosophy and psychology; exegesis; the history of dogma: the attacks came from all sides at once and Catholics seemed to be losing their footing. The spirit of modernity was penetrating every domain and forever mutating. Loisy’s cursed little red books alone had worked considerable mischief in a number of Catholic circles. Publications of increasing boldness, all the more brazen for their confident anonymity, were issued at regular intervals to fan the flames. The sensus catholicus was waning in a disturbing number of minds.

However, it is difficult to put a number on the Modernist influence. In 1905, one French intellectual at the heart of the fray estimated the number of progressive priests at around 15,000. To which Loisy replied in 1909—with perhaps a better vantage point—that there were not more than 1,500. From the opposite camp, a certain Franon quipped that the most influential Modernists would fit comfortably on two sofas. Sabatier, an insider, probably gives the most accurate notion: “Modernism is neither a party nor a school of thought: it is a tendency. It would be a delicate task indeed to determine the characteristic signs by which its adherents might be recognized: they are so different one from another! Beside the exegete, the historian, the scholar, there stands the pure and simple democrat. Beside the poet, the humble worker-priest. And yet, in spite of all their differences of milieu, of concern, of vocation, they recognize each other. There is no registry of members; they do not wear a badge; nevertheless, they find one another; they come together and are but one heart and one soul.”

St. Pius X deplored the extension of the crisis, evoking its seamless ranks and, more precisely, the large number of sailors, navigators and, sad to say, perhaps even captains, who had put their trust in profane novelties and in the lying science of the times and so capsized rather than sailing into their home port.

As soon as the 1907 decree of the Holy Office, Lamentabili, was labeled a new Syllabus of Errors, symmetry called for an encyclical to echo Quanta Cura. Rome was well aware of the need for a firm and direct attack in order to thwart the progress of an international movement of growing proportions. The project for the encyclical had been launched early. One of the distinctive traits of this pontifical letter is first to expose at length, in a masterly presentation of Modernism, the error it intends to proscribe. It reveals Modernism as a methodical system founded on very precise principles, not a formless mass of disparate theories as the heresiarchs would have had us believe.

If Modernism had only been a heresy, even a generalized heresy like Arianism, the Roman condemnations need have gone no f﻿urther. The obstinate heretics would have stepped out of the Catholic ranks to found their own movement, just as they had always done. Modernism, on the contrary, was confident in its own righteousness and so determined to reform the Church from within. The wolves in sheep’s clothing obstinately remained within the sheep-yard in hopes of converting it into a wolf-yard. Modernism is more than heresy and more than apostasy; it is a fifth column. Pascendi speaks of the simulated multitude of authors hiding behind pseudonyms, the better to hoodwink unsuspecting readers. We cannot be too insistent on this point: a Modernist is not only an apostate, he is also a dyed-in-the-wool traitor. Treachery and deceit are integral to the very system of Modernism. The bona fide Modernist is the one who can affirm his personal faith from the pulpit and then turn right around and contradict that faith in his writings as a scholar and an historian.

St. Pius X denounced their behavior with vehemence in his Motu proprio “Sacrorum Antistitum” of September 1, 1910, three years after the appearance of Pascendi: “Indeed, they [the Modernists] have not ceased to recruit new adepts and group them together in a clandestine league, through them infusing into the veins of Christian society the venom of their opinions by publishing books and journals anonymously or under false names.” The pope included after the Motu proprio a special oath against Modernism. The text was formulated with a precision leaving no room for equivocation. Each of the fundamental errors of Modernism had to be reproved formally and the oath signed personally by every member of the clergy charged with the care of souls.

Obviously, such an act on the part of the holy pope was ill-received by the opposition, which attacked the barbarity of this country curate with the mind of an unlettered Venetian gondolier, pushing the bark of Peter along with a pole. Whatever their invective, the pole of the gondolier doubled as a formidable harpoon! The incorrigible suffered ipso facto excommunication, which put a quick end to the clandestine agitating of the heresiarchs…until better days should dawn.