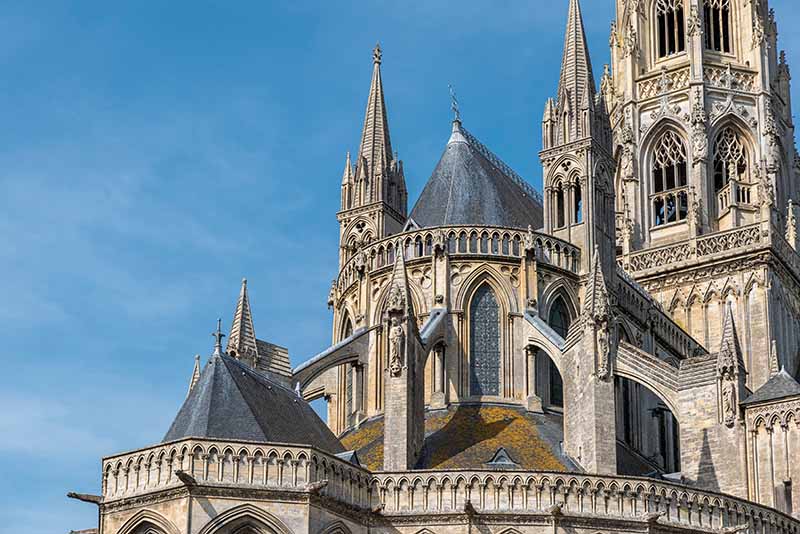 The Romanesque-Gothic cathedral of Bayeux is not the oldest, largest, or most impressive cathedral in France but it has a beautiful interior and a history that makes it well worth seeing. Most of the visible parts of the Bayeux Cathedral are Gothic but the church has a Romanesque core with even a few Carolingian elements in the crypt. Although Bayeux escaped the Second World War without any noteworthy damage, the exterior of the cathedral has not weathered the elements of the past few centuries too well. The interior with important Norman decorations is beautifully restored.

XIth century: The Norman Cathedral was consecrated in 1077. Only part of the front towers and the crypt remain as striking witnesses of that building, which was transformed during the following centuries.

XIIth century: The typical decoration of the large arches and of the walls was made from 1142 to 1263.

Then came the Gothic art; from this period still remain the enriched pillars of the nave, the doubling of the large arches, the ogive vaulted aisles, the southern doorway and the Chapter House (1165-1205).

XIVth century: chapels are built on the sides of the aisles.

XVth century: a lantern tower gave light to the transept in the Norman building. A graceful octagonal story was erected.

XVIth century: The furniture which had been destroyed during the religious wars was restored. The choir stalls were carved in 1589.

XVIIth century: The right side of the choir is surrounded by iron railings.

XVIIIth century: The high altar, made of grey marble, adorned with golden bronze, is placed in the choir. In 1772, the choir is enclosed with five railings richly carved. The Bishop’s throne and the pulpit have also enriched the cathedral during the XVIIIth century.

XIXth century: When the central tower was going to collapse, a most clever engineer boldly managed to rebuild the four piles of the cross-aisle on which it is based (1858). Being strengthened the tower is enriched with another octagonal story, on which is raised a brass dome supported by an iron frame.

The nave is made of six bays. The large semi-circular arcades of the lower story have not all the same span. The transition towards the high windows is showed by a row of four-leave trefoil and a string of graceful foliage all around the nave.

A Profusion of Sculptures

Without any doubt, Bayeux Cathedral is famous above all for the extraordinary profusion of sculptures which adorn the walls of the nave, representing either traceries of net-work, or different circles in which are carved four-petaled flowers. The visitor can observe the fretted, or lozenged archivolts of the large arcades, and being most attentive can notice the capitals of some pillars from the old Norman building, with abacus-looking like painted draught-boards. On the last but one bay remains a nice corbel showing the place of the ancient organ. In this lovely harmony, the most interesting carved work are the embossments which can be seen in each corner stone. On the north side, a juggler with a monkey; a bishop who seems to crush a snake; a lion over which flies a dragon grasping a human head in its claws; another bishop giving his blessing. On the southern side we have a bearded man, a dragon, interlaced monsters, a serpent clasping a tiger and a griffon over them. These strange beasts, inexpressive faces, stiff and unskilled no doubt come from various influences and talents. Does not a dragon with big and prominent eyes and pointed ears remind you of Far-East style? Undoubtedly most of these animals and monsters are not unlike those that can be found on miniatures decorating Saxon and Irish manuscripts.

The transepts are built in two stories which are divided by a narrow gallery and lined by a balustrade. In the north transept, where is the Sacristy, the lower part is decorated with large blind archways. On the upper part. A tri-pointed window gives light to this arm. In the south transept, the full archway adorning the wall does not reach the balustrade. Up to the trefoil line are some narrow trilobate archways of unequal height on the three walls. One can notice in the upper gallery six polychrome statues, representing the Apostles. Their most noble attitude and the folds of the garments tell us of most refined art. These statues of the XIIth century have been used later on when the transept was rebuilt.

The Structure of the Chapels

The chapels opening on the aisles were built in the first half of the XIVth century. Some of them are enriched with beautiful works, such as the Chapel of Bonne Nouvelle (north-west) where stands a reredos of carved and painted stone showing the emblems and symbols of Our Lady. In the north arm was formerly the Cathedral well. The side wall hides a chapel of Saint Peter. The reredos represents the Resurrection of Christ. In the south arm one altar is dedicated to Saint Nicolas and the paintings show the well-known tale of the three children; another one is dedicated to Saint Thomas Becket. On the tympanum of the next doorway are carved some scenes of his life. The choir has nine chapels. On the wall of Saint Michael’s chapel is painted a fresco of the Visitation, from the XVth century. The chapel of Saint Eloi has some paintings representing Saint Eloi and Saint Robert.

The choir with the ambulatory and the nine chapels makes a magnificent harmony. It stands as a typical example of Norman Gothic style. Four bays precede the apse. Above the archways is a beautiful triforium. A narrow way commences at the springing of the arches. The vaults are adorned with strange frescoes of the XIIIth century that have been restored, representing the first bishops of Bayeux, with most fine inscriptions. The adornment of the choir seems rather austere. Carved medallions made of geometrical designs are seen on each part of the archways, which all have the same span. On the back of the choir stand two pillars with a little column in each corner. Instead of roses, as you find on the right side, the adornment is made of foliage.

The crypt on which is built the choir is divided into three small naves; each of them has six bays, with ridged vaults. Several capitals decorated with rows of curved leaves are dating from the XIth century. Some of them are bearing acanthus leaves, roughly carved, and may date from the pre-Roman time. On the north side is a recumbent statue of a canon. Several frescoes of musician angels decorate the walls and the counter arches.

The most well-known ornament of the Cathedral is the famous embroidered cloth called Queen Mathilda Tapestry. This most valuable, historical and archeological document is kept in a museum not far from the Cathedral.

The Chapter house is a building adjacent to the north tower of the Cathedral. The north wall is adorned with a fresco of the XVth century representing the Holy Virgin surrounded by members of the Chapter of Bayeux. The paving stones are made of varnished earthenware of the XVIth century. In the middle of the room a labyrinth can be seen. On the tiles decorating the countermarch at the end of the room, which have been preserved, are painted hunting scenes—footmen with hunting horns, wild boars, stags, horsemen, etc. 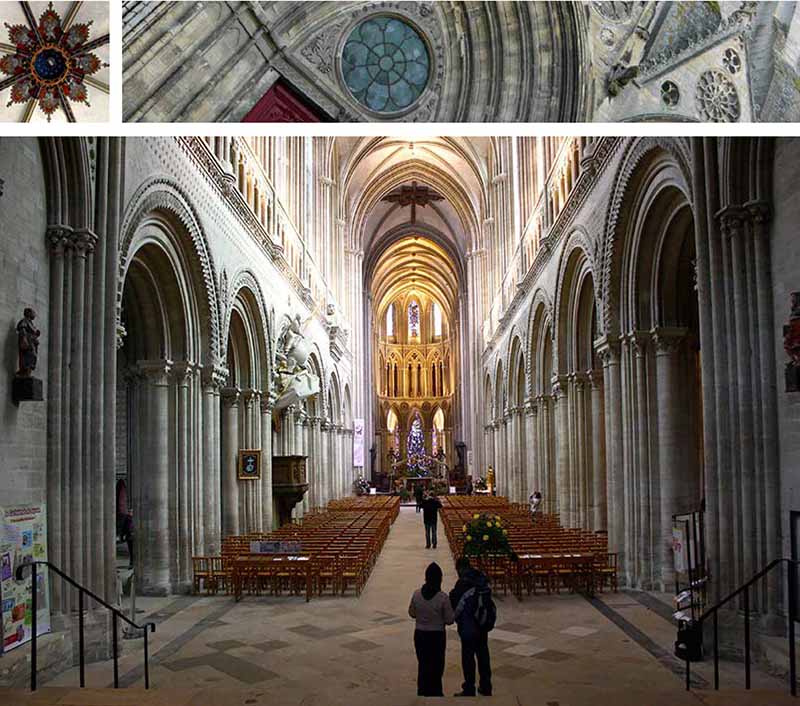 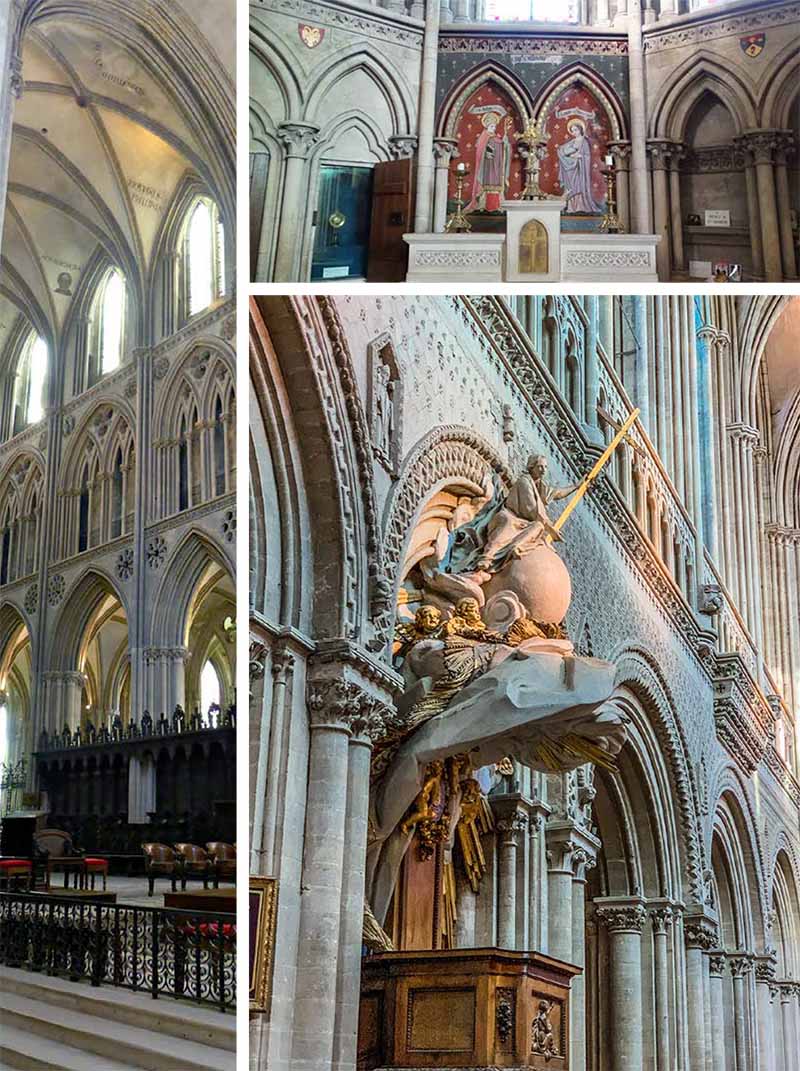