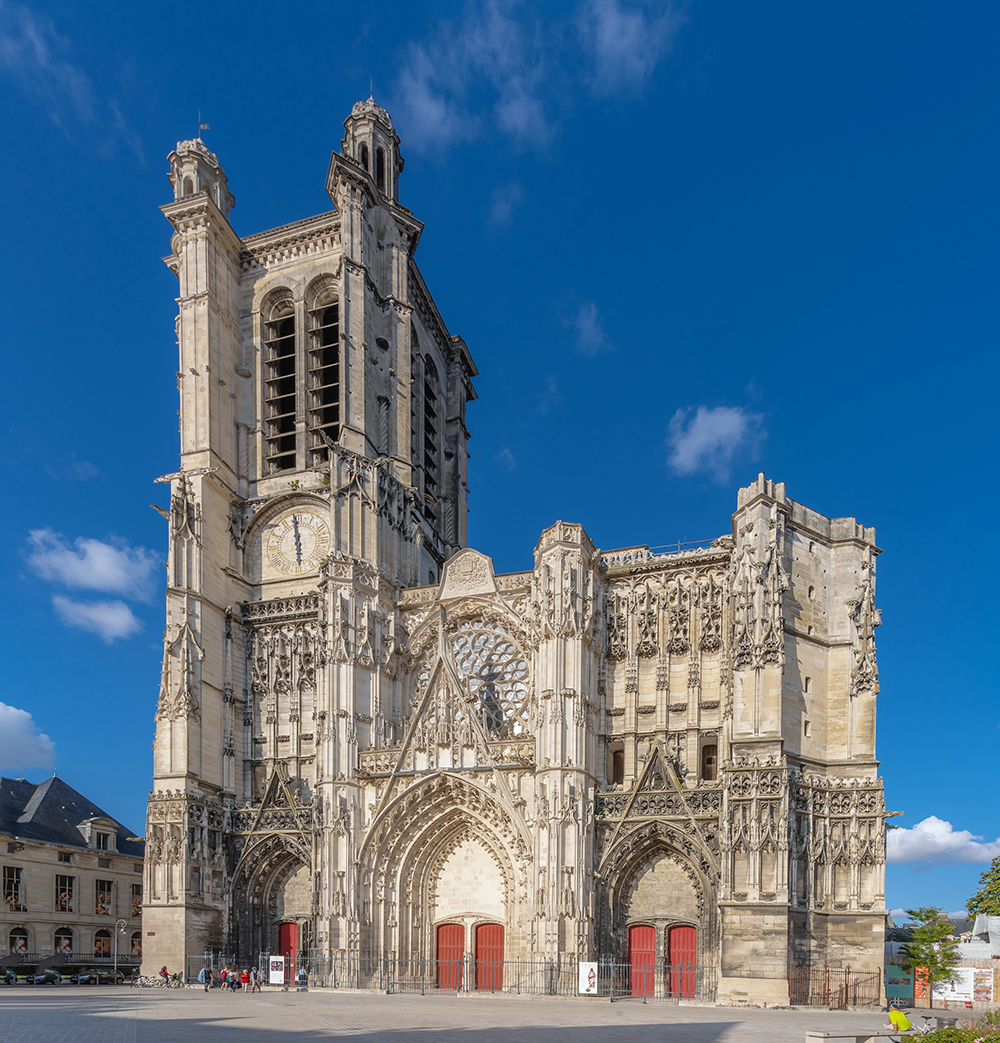 Troyes is a Roman town founded on the great Milan-Lyon-Boulogne axis. References to missionaries and martyrs at the end of the 3rd century bear witness to the existence of a Christian community, organized as a diocese in the second half of the 4th century. This period of religious peace enabled a church to be built in the city, perhaps on the site of the dwelling in which the first congregation had gathered to celebrate Holy Communion. Little is known of the early edifices. A reconstruction or a restoration erected in the 870’s was burnt down by the Normans in about 890. Between 975 and 985 the bishop undertook great construction work. The cathedral was then preceded by a vast tower-porch which survived until 1532 in place of the actual façade. After the devastation of a fire in 1188, funds were obtained for the complete rebuilding of the edifice in Gothic style. By 1223, the radiating chapels and the pillars of the choir had been built. In November 1228, a cyclone brought about the collapse of the upper sections. Construction was resumed in a new style which sought greater luminosity. The open triforium is one of the oldest if not the first to be conceived in a medieval work-yard. By the 13th century, the upper stained-glass windows of the choir were installed. In the late 13th and early 14th centuries, the transept was finished, and the nave undertaken, before their crossing was surmounted by a great steeple. The cathedral was far from being finished. The Hundred Years’ War combined with widespread pestilence drained the financial assets while at the same time significant flaws appeared in the construction and a series of disasters struck the edifice. In 1365, a cyclone demolished the belfry, in 1381, the southern rose window began to lean dangerously, then a thunderbolt set fire to the roof of the nave which collapsed soon after. In 1390, the northern rose window fell. It was difficult to face all these calamities. When the cathedral was consecrated on July 9, 1430, a year after Charles VII and Joan of Arc had journeyed that way, it was far from complete and there was only a mud-wall façade behind the Romanesque tower-porch. But it must be remembered that a work-site was never cleared all at once and the edifice to be replaced was pulled down little by little as the various stages of the rebuilding advanced. Notwithstanding the pitiable portal, priority was given to the crossing steeple whose new spire, 110 meters (360 ft.) in height was completed in 1437. Then followed a stone rood screen and stained-glass windows. The northern rose window was strengthened by a stone support and the nave completed at the end of the 15th century. 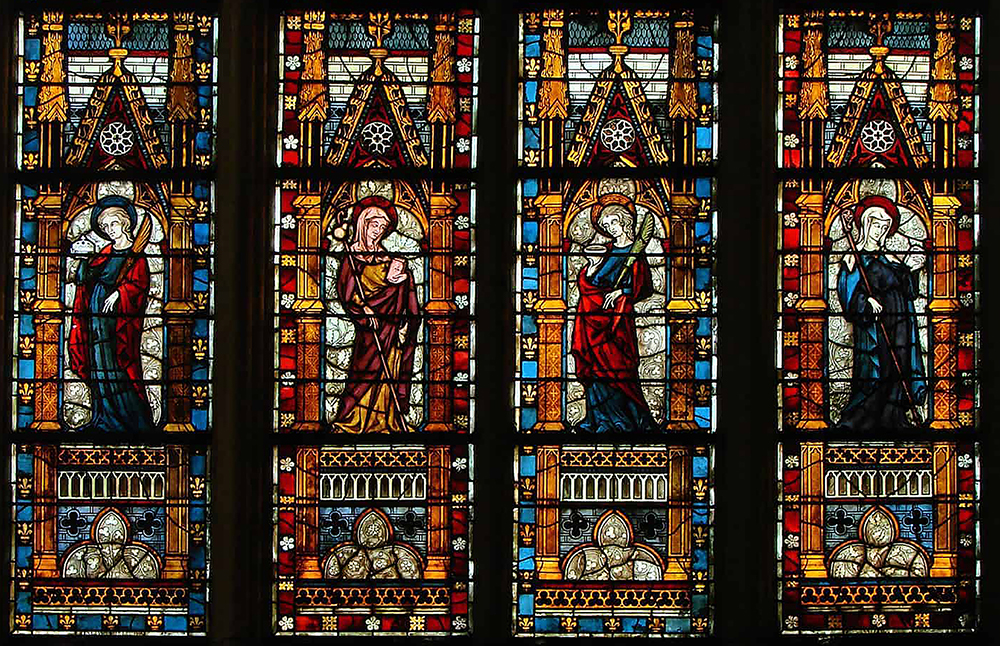 On May 3, 1507 the foundation stone was laid, 20 years later the towers and portal had risen to the first gallery. In 1546, the rose window was finished and in 1554, the level of the clock of St. Peter’s tower, to the north was reached. Only in the 17th century was the northern tower crowned, in classic style but it was never balanced by its southern twin tower. In 1700, lightning struck the great steeple, the timberwork caught fire and the bells crashed through the transept vaulting. The damage was repaired but the vanished bell-tower was never replaced. At the close of the century, still more disasters befell the cathedral. Dubious embellishments were added. Then Revolutionary vandalism destroyed the rood screen and ravaged the exterior statuary. This irreparable loss disfigures the flamboyant façade, reducing it to a composition of lines deprived of the volume of its decoration. Because of a lack of upkeep, serious faults were again discovered: crevices in the southern front which had to be rebuilt, inclination of the choir pillars necessitating the reinforcement of the foundations, the wall buttresses and the flying buttresses. During the entire period of the Second Empire, the cathedral was a vast building-site where architects managed to save it from ruins. Fortunately spared from the 20th century wars, the cathedral remains an unfinished edifice. A Gateway to Heaven, it reminds us that perfection is not of this world…An interesting result of the lengthy delays in construction is that one can obtain an overall view of the architecture of the Champagne area from the 13th-16th centuries. The separation of wall and bay created at Reims exists here in the very early example of the luminous triforium which leads to a dematerialization of the upper elements. The link between the superior levels, henceforth open and with a rhythmical pattern of the same ascending small columns confers a new vigor to the choir. As to the nave, the renewed surrounding stone fillings of its windows bear witness to the virtuosity of the Flamboyant Gothic style applied to stained-glass. The cathedral, whose walls are constellated with precious stones, is the image of celestial Jerusalem: it is among men, the dwelling place of God, who is Light. 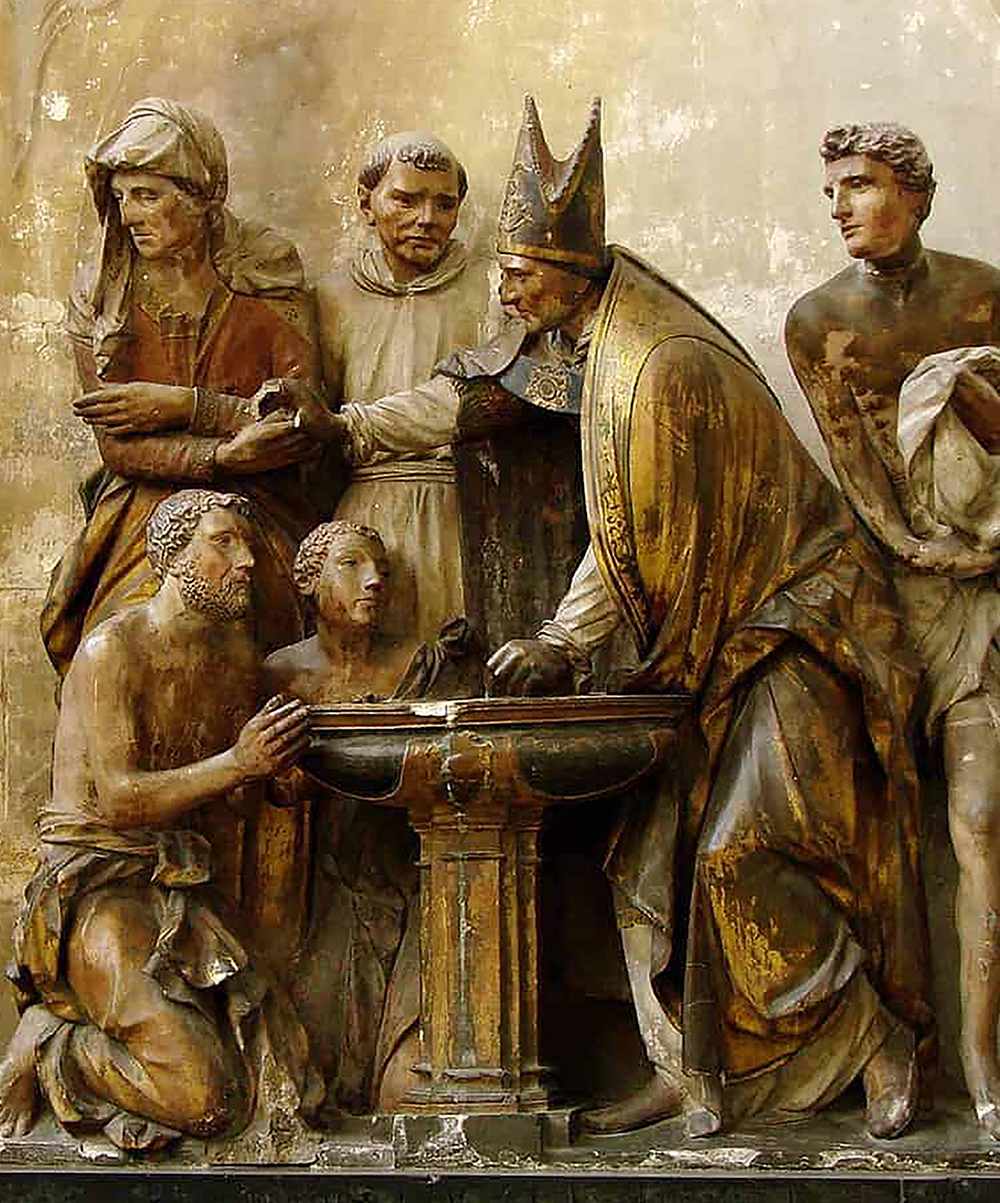 Let’s visit the interior of the cathedral. Standing at the far end under the organ. Behind, on the portal pier, the alliance of the porcupine and the ermine evoke the marriage of Louis XII and Anne of Brittany, whereas the salamander announces the accession of Francis I. Ahead are the five naves erected from 1208 onwards. Between the laying of the foundation stone and the accession of Francis I in 1515, slightly more than three centuries of Christianity have passed characterized by the stability of the Gothic order. The rose-window (1546) of the great portal marks its end. Three distinct periods of construction reveal the three important stages of the Gothic style. In the middle of the 13th century, the edifice has reached the level of the transept. The choir is then closed by a temporary wall. The cathedral transept and lateral naves are built in the 14th century. Work is resumed after the Hundred Years War, the great nave acquires its vaulting and its Flamboyant stained-glass. Except for the portal, the same plan served for the entire construction. Move to the right-hand pillar and investigate the holy-water bowl: the cathedral with the purity of its nave and the splendor of its stained-glass windows, is reflected in it.

With our back turned to the great portal, we can advance to the left-hand Lateral nave. First, you will see the Tower Staircase, then a great picture of the Transfiguration (1831). On the second pillar to the left, note the capital made of cabbage leaves being eaten by a big snail. Then stands a stained-glass window (1625), showing Christ lying under a press, His blood flowing into a chalice. From His chest emerges a vine whose branches bear the 12 apostles. Passing into the transept, continuing on the left, note the 16th-century rose-window and the four Evangelists in the small roses in the corners. Arriving at the ambulatory, we first see the Sacred Heart Chapel presenting the only semi-circular window. Then, Jesse’s Tree. And we arrive at the Axial Chapel of the Virgin. On the windows: scenes of the life of Christ and His mother. On the altar: the Virgin and Child depicted in a white marble statue. Several bishops are buried in this chapel. After the Chapel of the Virgin is found the story of St. Peter and the life of St. Loup. The treasury is composed of a first basic collection of valuable objects brought from Constantinople (4th crusade). The treasury was enriched throughout the centuries by deposits and discoveries, the most recent being the celebrated 14th-century red cope with its 49 embroidered medallions. International exhibitions have displayed important items of the Troyes Treasury. The treasury is ornate by an 1170 stained-glass window of St. Peter and St. Paul. The visitor should note the modern rose-window of the southern transept: Christ and the four Evangelists. Stop at the Chapel of the Assumption (of the Holy Sacrament); the window dates from the 17th century: the Immaculate One is surrounded by her attributes. The view of Jerusalem is as described in the Book of Revelation. The Chapel of the Fonts has a Renaissance enclosure and a fine copy of the Last Supper. One can admire also the Window of the Virgin of the Apocalypse, clothed with sun rays, a crescent moon under her feet, in the middle of a chorus of Angels. Then a multicolored stone group depicts the baptism of St. Augustine by St. Ambrose (1549). 16th century painted wooden panels represent the Virgin and the entry of Jesus into Jerusalem.

The cathedral has two sets of stained-glass windows that deserve a closer look. The first set, sanctuary and choir, is middle 13th century. The second set, end of 15th early 16th century, to which can be added a 17th century enamel work. The best times to view them are morning for the southern windows, late afternoon for the northern ones. In the very early hours, the stained-glass, seen against the light, is just a sparkle of constellations changing and glittering as the visitor proceeds where he can view all the jewels of the Apocalypse. The characters of the Old Testament are placed on the north side, beginning with Adam who is followed by the Patriarchs and the Prophets. They draw nearer to the dawn, whereas the Chapel of the Virgin, in the apse, receives the first rays of the setting sun, through the nave rose-window, emblem of Paradise. Altogether there are 1,500 square meters (4921 sq. ft.) of windows which have traversed victoriously centuries of trials: fire, conflagration, negligence, the perils of wars, and the Revolution.

Let us look at the 13th century stained-glass windows of the choir. Facing the choir, moving to the left we see:

With our back turned to the organ, we can advance to the right and look at the windows:

In the choir, the 82 stalls originally were at Clairvaux. They date from the 18th century. 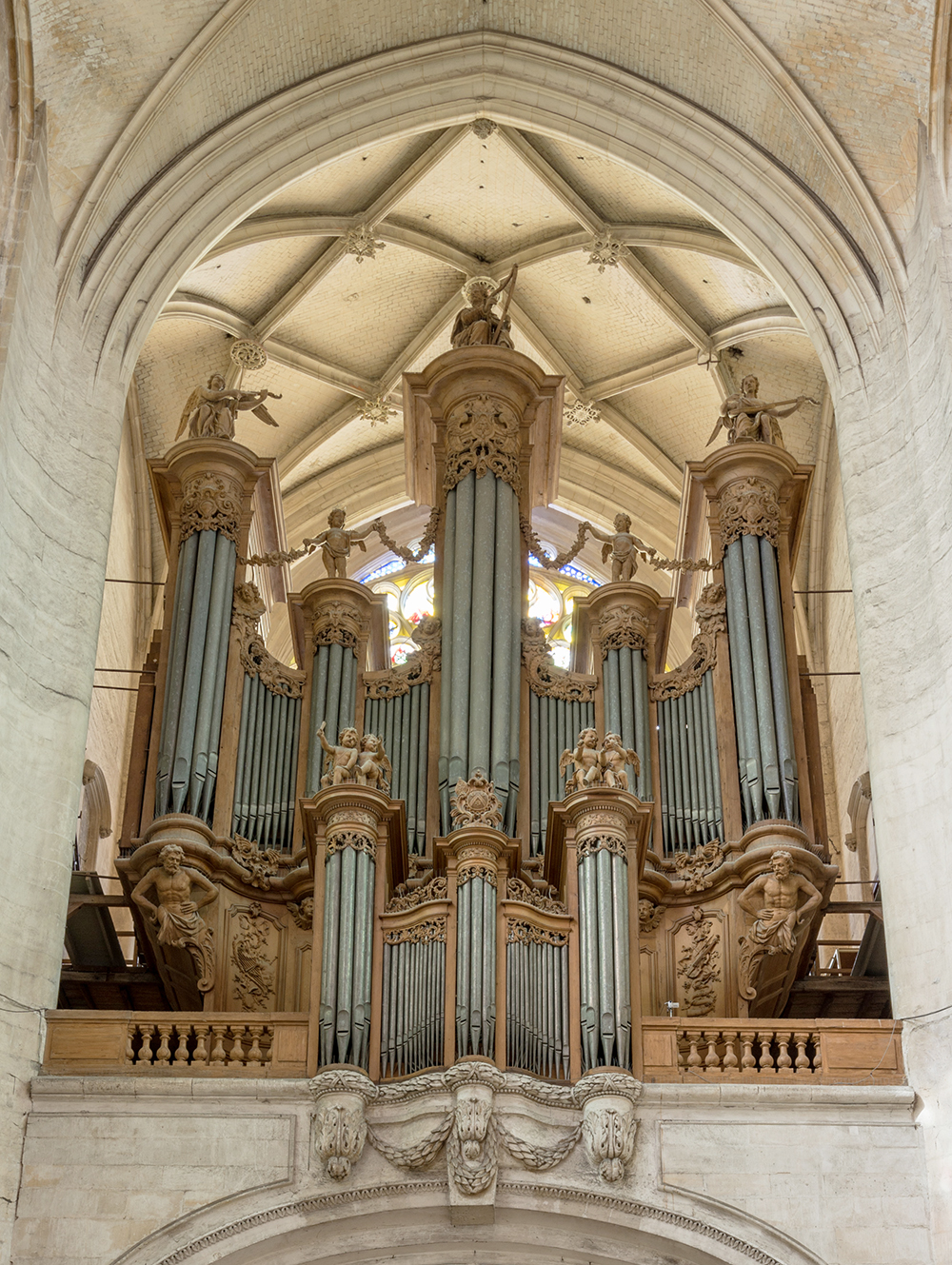