A Bookplate of the First Catholic Bishop in Australia

Editor’s Note: The author of this piece credits Sr. Mary Agnes for her assistance with interpreting ecclesiastical symbolism.

The first Catholic bishop in Australia, who arrived in Sydney in 1835, was a Benedictine monk of St. Gregory’s Monastery, Downside, 12 miles from Bath in Somerset. He was Dom John Bede Polding, OSB (1794-1877). He had been preceded in 1833 by another Downside monk, William Bernard Ullathorne (1806-1889) who had arrived in Sydney representing the English Benedictine bishop with authority over New Holland who resided at Mauritius. He found a penal colony so replete with vice that he cited Old Testament texts to evoke its iniquity. Upon his return to England, Fr. Ullathorne recommended the appointment of a bishop for New South Wales to eliminate factionalism in the local Catholic population in a penal society, chiefly composed of convicts and ex-convicts, to end dissension among a handful of priests and to enhance pastoral initiatives.

By papal briefs in late June 1834, Dom Bede Polding was appointed Vicar Apostolic of New Holland, Van Diemens Land (today’s Tasmania) and adjacent islands. He was consecrated in London as Bishop of Hiero-Caesarea in partibus infidelium in accordance with the canonical practice of nominating bishops in missionary countries to the titles of defunct ancient sees. From boyhood Polding had taken a keen interest in the originally priestless plight of the chiefly Irish Catholics of New South Wales. Previously he had refused episcopal appointment to Mauritius and to Madras in India.

The first local official Catholic chaplains were two Irish priests, Rev. Philip Conolly (1786-1839) and Rev. John Joseph Therry (1794-1864) who had arrived in Sydney in May 1820 with an annual government salary of 100 pounds. The senior priest, Fr. Conolly moved to Hobart in March 1821. There he remained, except for a six-month trip to Sydney and the penal settlements at Newcastle and Port Macquarie in 1822, until his death in 1839. Fr. Therry traveled extensively in the Australian colonies and achieved a legendary status amongst the Catholic laity His funeral in 1864 was reckoned to have been the largest held in Sydney to that year.

On January 20, 1835 the Catholic episcopal appointment was notified to Governor Richard Bourke at Sydney. Bishop Polding arrived there on September 13, accompanied by one priest and five students, three of whom were Benedictines. Fr. Ullathorne became the bishop’s Vicar General in Sydney until he returned to England in 1840.

With a jurisdiction covering the whole of Australia, in the first instance Polding spent much of his colonial career in travel over distances so vast as to recall the far-flung missionary apostolate of St. Francis Xavier (1506-1552) in the 16th century. On April 5, 1842 following Polding’s request for it Rome approved the establishment of an Australian Catholic hierarchy with dioceses in Hobart and Adelaide in addition to Sydney Archdiocese. Polding became Metropolitan and first Archbishop of Sydney. This was the first Catholic hierarchy established within the British Empire since the 16th-century Reformation. Nine years later the Catholic hierarchy was restored in England.

The new bishop was ambitious for the local growth of his ancient Benedictine Order. The monks of his English Benedictine Congregation were established on the Continent in France and elsewhere since the early 17th century. But the black monks had been forced back to their native land by the violent anti-clerical excesses of the French Revolution in the 1790s. In 1814, the Benedictine community from Douai following a sojourn in Shropshire arrived in Somerset. In Sydney, he sought to create a Benedictine abbey-diocese based on St. Mary’s Cathedral and monastery, a romantic ambition inspired by the original black monks of St. Benedict (ca. 480-540) who had evangelized so much of Europe and England after the 5th-century expiry of the Roman Empire in the West. 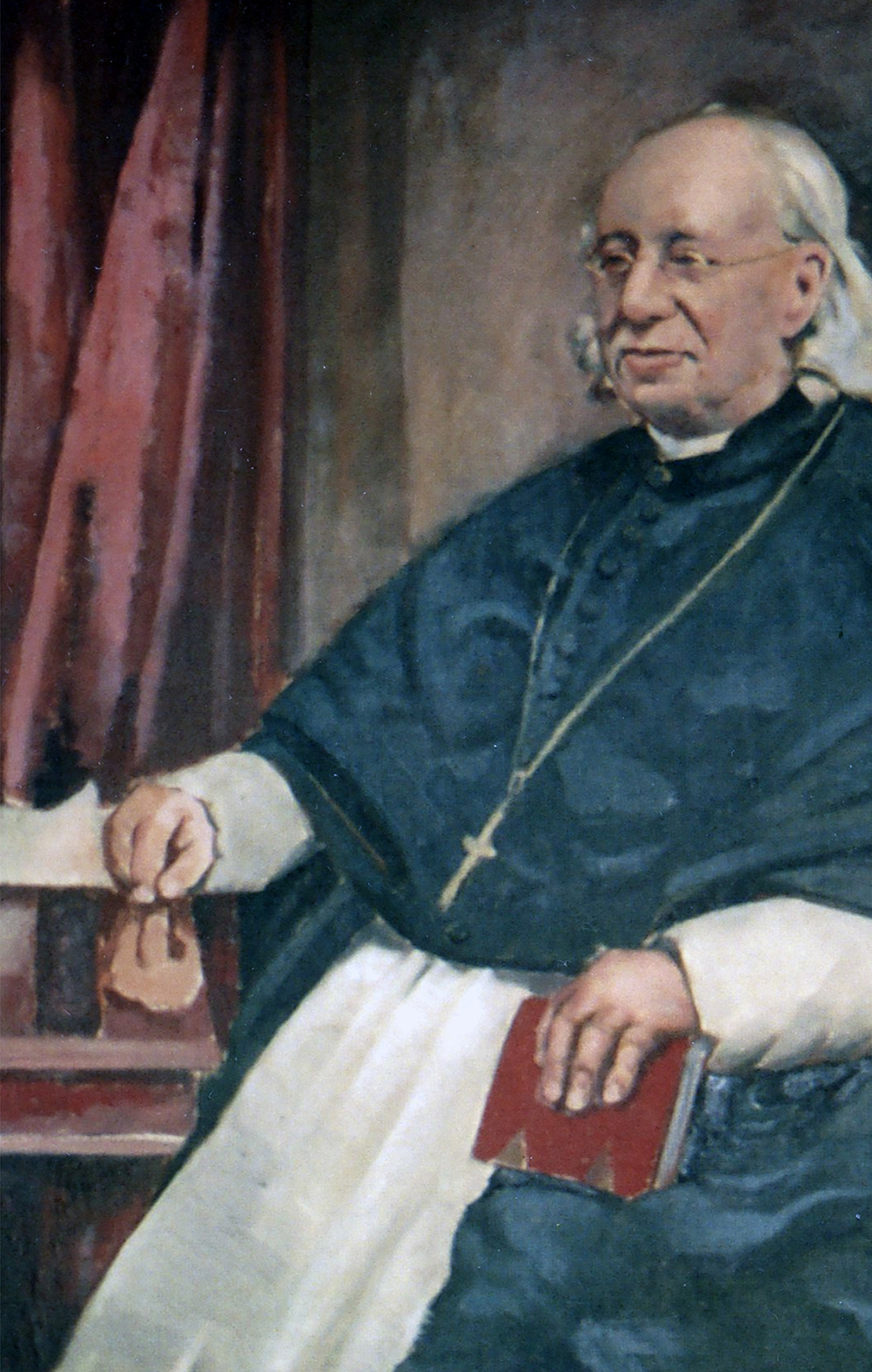 In 1843, Archbishop Polding founded a Benedictine community at the first St. Mary’s Cathedral in Sydney with Roman approval. But by the 1860s his abbey-diocese concept, which was never approved by Rome, was floundering in the face of particular local realities. These included majority Irish Catholic preference for secular Irish priests and their ready availability from Irish seminaries as opposed to insufficient local Benedictine vocations to sustain both the cathedral choir offices and wide ranging pastoral responsibilities in and beyond Sydney. The English Benedictine Congregation, which was painstakingly re-establishing itself in England, could not spare monks for the Australian Catholic mission. Then there was the arrival of other religious orders who proved resistant to a wholly Benedictine regime.

At Polding’s death in 1877, he was succeeded as Archbishop of Sydney by his coadjutor, another English Benedictine monk, Roger Bede Vaughan (1834-1883). By then a growing Catholic Church had been firmly established in Australia beyond the original penal era and with a dominant Irish character.

Before his original 1834 departure from London, Polding had scoured the bookstalls of Paternoster Row noting on the flyleaves of purchased books the prices he had paid for them. On the front pastedown of a 1770 Paris edition of the Rule of St. Benedict is the new bishop’s bookplate. Apart from the Rule, this edition also contained the Constitutions of the Congregation of St. Maur (1621-1792), the largest Benedictine congregation in France until it was destroyed by the Revolution. In 1792, the last Maurist superior went to the guillotine followed by 40 monks.

This calf-bound volume with its paper watermarked, “Anvers” (the French name of Antwerp) for its place of manufacture also bears the signature of its owner, “Rt. Rev. J.B. Polding.” The crest on the bookplate of the new Bishop of Hiero-Caesarea and Vicar Apostolic of New Holland on the book’s front pastedown is topped by an episcopal broad-brimmed hat. This is a Roman galero with descending ten tassels that denote episcopal rank on both sides of a divided shield.

The hat and tassels were customarily colored green for a bishop. A cross crosslet rises out of the shield. The shield’s left side features a Latin cross with two traverses, the Cross of Lorraine, encircled by a crown of thorns symbolizing sacrifice. This cross rises out of three rocks standing for Calvary and the three theological virtues and passes through the Benedictine PAX (peace). Pax was the motto of St. Benedict’s twin sister St. Scholastica (ca. 480-543) and a perennial Benedictine symbol. On the shield’s right side from bottom to top is a wall perhaps evoking Fortitude in the building of a new Catholic nation in the antipodes. Standing on the wall is a winged lion facing right in profile with a human head and breasts perhaps evoking the Canticle of Canticles. The scroll beneath captions the shield with the new bishop’s motto, Adjutor Deus (God my helper).

* A bookplate or book-plate, also known as ex-libris (Latin for “from the books (or library)”), is usually a small printed or decorative label pasted into a book, often on the front endpaper, to indicate ownership.