The Family and Christian Societies

Letter of Cardinal Pacelli, Secretary of State, to His Excellency, Bishop Killian, November 1936.
(The Australian Congress of Catholic Education)

Any thoughtful person realizes, and history proves it irrefutably, that the foundations of civil society necessarily collapse with the decadence of the Christian institutions and Christian standards; while, on the other hand, the renewal of the Evangelical spirit constitutes an adequate remedy even for inveterate evils, and leads to the attainment of the highest and fullest perfection of individual, family and civic conditions. This, in any case, is perfectly natural.

The Church, being the great Teacher of mankind, firmly and faithfully defends the integrity of those principles on which the duties of everyone, at all times, and everywhere, are based, suggesting the more effective reasons for leading an honest life, and pointing out, as the goal of virtue, a happiness which lies outside the brevity and fragility of earthly life. Although the Church tends towards heavenly things, she by no means hinders or condemns the progress of those resources which lead to temporal wellbeing, and neither does she condemn that which develops natural talent, perfects manners, and strengthens the body so as to render it more capable of carrying out with greater perfection the good works of the spirit and that which supplies life’s innocent pleasures; all that regards art and literature, the enterprises and institutions useful to human society, all that is honest and lawful has not only never found impediments of any kind in the Church but rather its beginning or valuable aid. It seems to be a fact established by a wonderful design of Divine Providence that at the moment when the divine flame—Christ crucified—shone from the torch, civilization and culture worthy of the name sprang up, like a precious herb entwined about the trunk of the Cross, a fruit ripening at the side of the Cross, a light surrounding the Cross, a dignity flowering in the life of mankind from the tree of life. 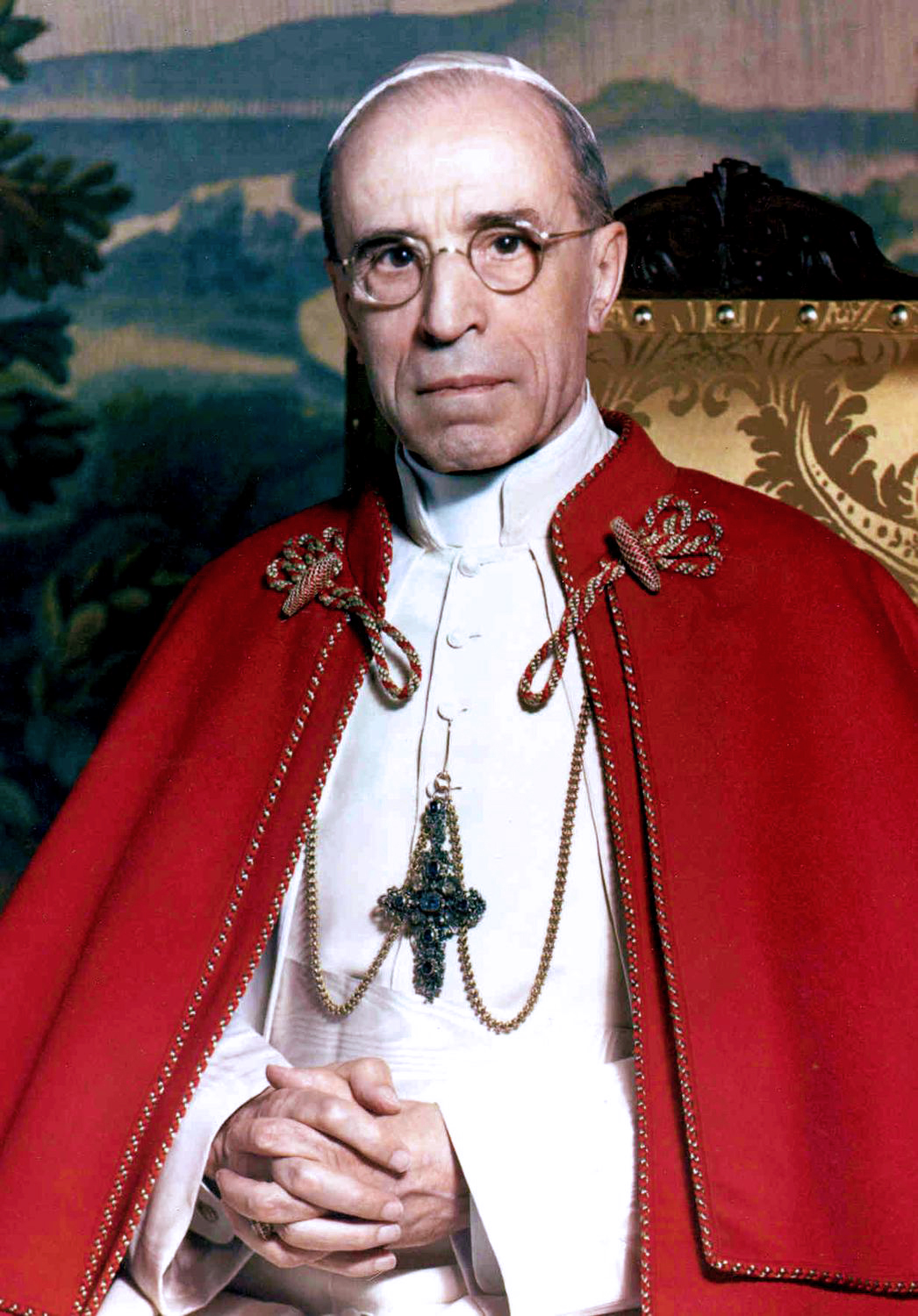 However, all these resources, falling within the confines of nature, though useful and praiseworthy, are insufficient to satisfy a soul created for higher things. Our soul, in fact, tends toward God, who is not attained by material means, but by means of knowledge and love. This, the principal and necessary thing, is handed down to men by the Church only, which has been set up by divine will as the Holy City of the living God; the Church perfects minds with the truth received from Heaven, and she perfects wills by charity, in such a manner that she unites men to the Highest Truth, and the Highest Good, without in the slightest falling short of her purpose, for with the light of doctrine and the strength of grace the Church teaches by helping, and helps by teaching, disposing in a marvelous order the duties of the faithful to guide them, since the fulfillment of the divine will and the observance of the law are the means for attaining the reward of eternal happiness.

Who is wiser, nobler and stronger than the follower of the Church, than he who is aware of his duties? He submits his mind to God, ruler of the universe, and, allured by celestial promises, patiently resists the enticements of this perishable life, and does not permit his mortal body, destined to be the instrument and weapon of justice, to become the seal of sin; in such a manner he has a foretaste of heavenly things, since “man rejoices in peace and true liberty, when the flesh is subject to the spirit which judges, and when the spirit is subject to God who controls.”(St. Leo the Great) In all that he thinks, in all that he says, in all that he does, be it in public or in private, he always regulates himself so as to have the truth as ruler, love as law and eternity as a goal.

Such being the Catholic formation, the great abundance of good derived for the formation of society and domestic life cannot fail to be realized by all. Matrimony is not contracted for the satisfaction of fleshly desires, but for the procreation and education of children, who are taken from God and for whom account will have to be rendered. The foundations of the domestic home cannot be undermined since, till the death of one of the couple, the matrimonial contract continues to hold good, so that the pledged faith, chastity, and the fear of God keep impure wickedness at bay. Paternal power is suitably tempered in view of the dignity of the wife and children; children, moreover, consider sacred the homage of obedience to be rendered not because of threats and force, but as a duty of conscience—a duty born of the reflected authority of God in parents.

What is more beautiful, more joyful, greater than the peace of a home resting on the dictates of Catholic education! The offspring grow up happily, and their number is determined not by disgraceful calculations but by the providence of God who blesses the nuptial bed. The married, loving one another reciprocally, are fully united in the love for their children, and as a reward for their care, are encouraged by signs of a virtue which proudly reflects ancestral habits. The father’s hard work is softened by the thought that the children are amusing themselves at home, while not even the night brings with it a slackening of the care and attention of the mother. With what a smile, with what feeling, the mother, holding the little children on her knees as they babble their first words, made all the more sweet by the stumbling tongue, suggests for their inexpert lips the sublime and adorable name of Jesus! A family formed in the Catholic spirit does not complain of poverty, is not ungrateful in times of abundance, convinced that, whatever be their lot, favorable or otherwise, there is always constancy of soul to be practiced; and even when faced by want, they always find something to give, never ceasing to desire only what is good.

If these things contribute in such a great measure to the well-being of cities, individuals, too, when they dutifully and faithfully observe the rules of Catholic education, become excellent citizens, be it in time of war or of peace. The very precept of love of God, which is the peak of religious teaching, bears most excellent fruit and does so spontaneously of its very nature, namely, love of one’s neighbor which is the nursery and source of all social virtues. Forgiveness of offenses, generosity, kindheartedness, and benignity are the characteristic virtues of the follower of the Gospel, virtues which once aroused such admiration among the pagans that they were almost enraptured by the new marvel, and very speedily embraced the Christian religion.

To this charity is added also respect for justice. Let every honest and competent person, then, who has civil prosperity and dignity at heart, reflect what great utility and tranquility is offered to the State by education taught according to the spirit and directives of the Church. In fact, for him who professes the Catholic religion, it is a sacred and inviolable matter to give everyone his due, to honor the nation and the authorities who rule it; to turn a willing ear to governors, to render them obedience, fidelity and devotion, not unlike that which is given by children to their parents; to respect the law; to avoid all revolts, zealously to defend public order; to devote oneself with unlimited diligence and dedication to the glory and prosperity of the nation.

. . . The Adelaide Congress which stands out so solemnly because of the number of holy Prelates and priests, the crowds of people, the holy ceremonies, the debates and conferences, should prove itself fruitful to Australia, and should serve as an example to the entire world, a warning to all peoples, reminding them that, by abandoning Christ they commit the worst of errors and plunge themselves into ruin, while those adhering to Him with unshakeable faith and hope will reap the most sublime benefits. Indeed Jesus Christ leads the way to a holy existence, the truth of a divine teaching, and a life of eternal happiness; the light of the world, the only Master of men who, having set up the Church as a pillar and support of the truth, teaches us and outwardly trains us with the infallible teaching of the Church, while internally, in the intimacy of the heart, He instructs us by the secret light of grace every time that the whisper of His divine voice, which speaks without sound, is heard by a clear conscience, with a genuine faith and in the noble silence of the mind that meditates and prays.