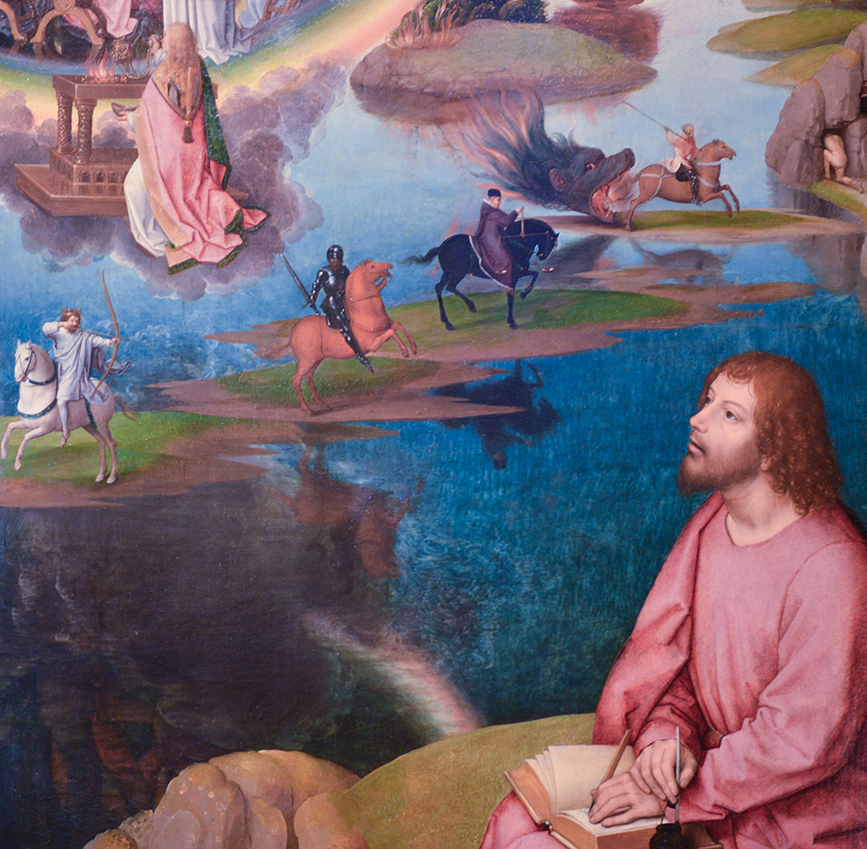 When reading St. John, we do have to keep in mind how he retains the various meanings behind words, and how he is very much at home with symbolic language. Maybe more fruitful, though, will be his understanding of how God acts and teaches. For God dwells outside of time and place and is the Master of both, dominating all in His eternal present and ordering all for His greater glory. “The Lord hath made all things for Himself” (Prov. 16:4). He works all things for the good of the elect: “To them that love God, all things work together unto good, to such as, according to His purpose, are called to be saints” (Rom. 8:28). God does ordain all for our instruction: “All these things happened to them in figure: and they are written for our correction, upon whom the ends of the world are come” (I Cor. 10:11).

Especially of sacred history, of divine doings, can it be said that they pre-figure the central events of all human history: the life and mission of the incarnate Word of God. Things ordained to Christ, such as the Paschal Lamb, are called “figures’’; people who pre-figure others are called “types.” The Sacred Writers of the New Testament, and St. John in particular, were very alive to seeing the New in the Old, so pre-ordained by God. As St. Augustine would put it: “The New Testament lies hidden in the Old, the Old becomes clear in the New.” Again, he would speak not only of “prophecy by words” but also of “prophecy by deeds.”

A phraseology common to St. Matthew: “that might be fulfilled that which was spoken by the prophet(s)” is also common to St. John, where it might be of “prophecy by words,” but also “prophecy by deeds.” For example: “I speak not of you all: I know whom I have chosen. But that the scripture may be fulfilled: He that eateth bread with me shall lift up his heel against me” (Jn. 13:18). Where is the like written? “For even the man of my peace, in whom I trusted, who ate my bread, hath greatly supplanted me” (Ps. 40:10). This may not be the place to treat of this at any length, but let us just mention in passing how interesting it is to consider how the New Testament cites the Old: rarely literally, usually substantially; rarely according to the wording of the Hebrew Bible, mostly closer to the reading of the Greek text, the Septuagint.

Psalm 40, moreover, is one of the few that has a “title”: a brief word of “introduction,” often obscure, dealing with the occasion for or purpose of the psalm. Here we have: “…a psalm for David himself.” This is one of those, therefore, composed by the Royal Prophet himself, occasioned by some event or other in his own life. Here, it was when he was fleeing Jerusalem because of the rebellion of Absalom. Verse 10 refers to a certain Achitophel, who had been a trusted counselor of David, but joined sides with Absalom, giving counsel now against David.

We read of him in the second book of Kings and the first of Paralipomenon; thus: “And they all wept with a loud voice, and all the people passed over: the king also himself went over the brook Cedron… David went up by the ascent of Mount Olivet, going up and weeping, walking barefoot, and with his head covered, and all the people that were with them went up with their heads covered. And it was told David that Achitophel also was in the conspiracy with Absalom, and David said: Infatuate, O Lord, I beseech Thee, the counsel of Achitophel” (II Kings 15:23, 30f).

King David as a Type of Our Lord

What is King David doing? He is leaving Jerusalem in sorrow, crossing the brook, Cedron, passing through the garden of olives to ascend the mount of olives… He is a “type” of Our Lord, who will have to leave Jerusalem on Holy Thursday night, because of His enemies, who will cross the brook Cedron (Jn. 18:1) and pass into the garden at the base of Mount Olivet, Gethsemane (ibid.); and Achitophel is Judas, one of His intimates, “He that eateth bread with me” (Jn. 13:18). “The counsel of Achitophel which he gave in those days was as if a man should consult God: so was all the counsel of Achitophel, both when he was with David, and when he was with Absalom” (II Kings 16:23). God, however, allowed that his counsel not prevail and David be saved.

“Achitophel, seeing that his counsel was not followed, saddled his ass, and arose and went home to his house and to his city, and putting his house in order, hanged himself” (II Kings 17:23). He is, in a “typical” sense, Judas. “Those whom Thou gavest me have I kept; and none of them is lost, but the son of perdition, that the scripture may be fulfilled” (Jn. 17:12).

On Use of the Allegorical Method

Apart from the literal and historical sense where words stand for things, there are spiritual senses, where the things signified by words themselves stand for things. Seeing the New Testament in the Old is called the “allegorical” sense, in which the Fathers and the Liturgy so delight, and with which we are not nearly so much at home. Granted! The first and proper sense is the literal, and the allegorical is open to abuse. But this latter remains a divine sense whenever God Himself so guarantees it and, for one, St. John is a witness to this, which may also be by the universal testimony of the Fathers.

Another, more obvious, example of the figurative sense: “After they were come to Jesus, when they saw that He was already dead, they did not break His legs. But one of the soldiers with a spear opened His side…these things were done that the scripture might be fulfilled ‘You shall not break a bone of him’; and again: ‘They shall look upon him whom they pierced’” (Jn. 19:33-36). The book of Numbers, in a literal sense, refers to the Paschal Lamb, but in a more true and allegorical “figurative” sense to the events of the first Good Friday.

Now, could not the New Testament itself pre-figure souls in the Church Militant or Church Triumphant? Very much so, and this is how St. John would like his writings to be read, that we “may have life in His name” (Jn. 20:31). At times Our Lord makes it explicit that He is the pattern for every Christian who would come after Him: “I have given you an example, that as I have done unto you, so you do also” (Jn. 13:15). But, of course, He is such a pattern even when He does not remind us of it explicitly: “He that saith he abideth in Him, ought himself also to walk, even as He walked.” This will be especially true of fraternal charity: “In this we have known the charity of God, because He hath laid down His life for us: and we ought to lay down our lives for the brethren” (I Jn. 3:16); for “God is charity” (I Jn 4:8).

Our Lord and Mary Magdalene

It is very encouraging and enlightening to see oneself in different New Testament personages, according to one’s disposition of soul. This is because it is the same Jesus with the same attitude towards, and modus operandi with, such souls that we are dealing with now. At times, can we not relate to a Mary of Magdala, “a woman that was in the city, a sinner” (Lk. 7:37), “out of whom He had cast seven devils” (Mk. 16:9)?

Her devotion to Christ would see her at Calvary (Jn. 19:25) though so devastated that she could give no consideration to His being risen, even when confronted by angels (Jn. 20:12). And with what understanding and tenderness does not Our Lord deal with her: at the death of Lazarus (Jn. 11:32ff), at her being rebuked for such a waste of spikenard (Jn. 12:7), and now, on the day of His resurrection (Jn 20:14-17)?

We are being invited to be like her in weeping over our sinfulness, delighting in remembering God’s loving condescension to us, adhering to Him, even though we may not understand why or what He is doing to us. We are invited to never abandon Him even though He seems to have abandoned us. We are invited to make always an act of faith in His tender love: “We have known, and have believed the charity which God has to us” (I Jn 4:16). He is the same Jesus, with the same attitude to repentant souls, Who is treating with us. We are to believe in His goodness to us, even if we have been a Peter who thrice denies Him (Jn. 18:16ff, 21:15ff) or a Thomas who doubts (Jn. 20:24ff). Could we aspire to being a “disciple whom Jesus loved”? John gives himself no other name in his Gospel, but what a glorious name it is! For us, through his writings, to learn what attracts the Sacred Heart of Our Lord, and to pray and seek too to be a disciple whom He loves.