Redemptorist Spirituality and the Christian East

The Crib, the Cross, the Altar, and Mary— these are the pillars of the spirituality of the Congregation of the Most Holy Redeemer (C.Ss.R.), commonly known as the Redemptorists. Founded in Italy in 1732 by St. Alphonsus Liguori, the Redemptorists was primarily a missionary apostolate which directed its focus towards the most abandoned in society. For over a century, the Congregation spread throughout Europe, drawing vocations from all walks of life while forming holy men such as Ss. Clement Hofbauer, Gerard Majella, and John Neumann.

Like most Catholic religious congregations, the Redemptorists took root in the Latin Catholic Church and maintained the traditions of Roman liturgy and spirituality. However, because of its mission to seek out the most abandoned, that is, those most in need of spiritual sustenance and ministry, by the dawn of the 20th century the Redemptorists found their eyes turned Eastward in a seemingly unlikely manner.

The Redemptorists and Greek Catholics

Beginning in the late 19th century, Catholics from the area that comprises modern day Ukraine began to settle in North America, specifically Canada. Members of the Ukrainian Greek Catholic Church (UGCC) from birth, these émigré Catholics found themselves strangers in a strange land without pastors who could celebrate the liturgy according to their native Byzantine Rite or were familiar with these Catholics’ spiritual heritage. Sympathetic to their needs, Fr. Achille Deleare, a Belgian Redemptorist, embraced the Byzantine Rite and began ministering to these shepherd-less Christians. 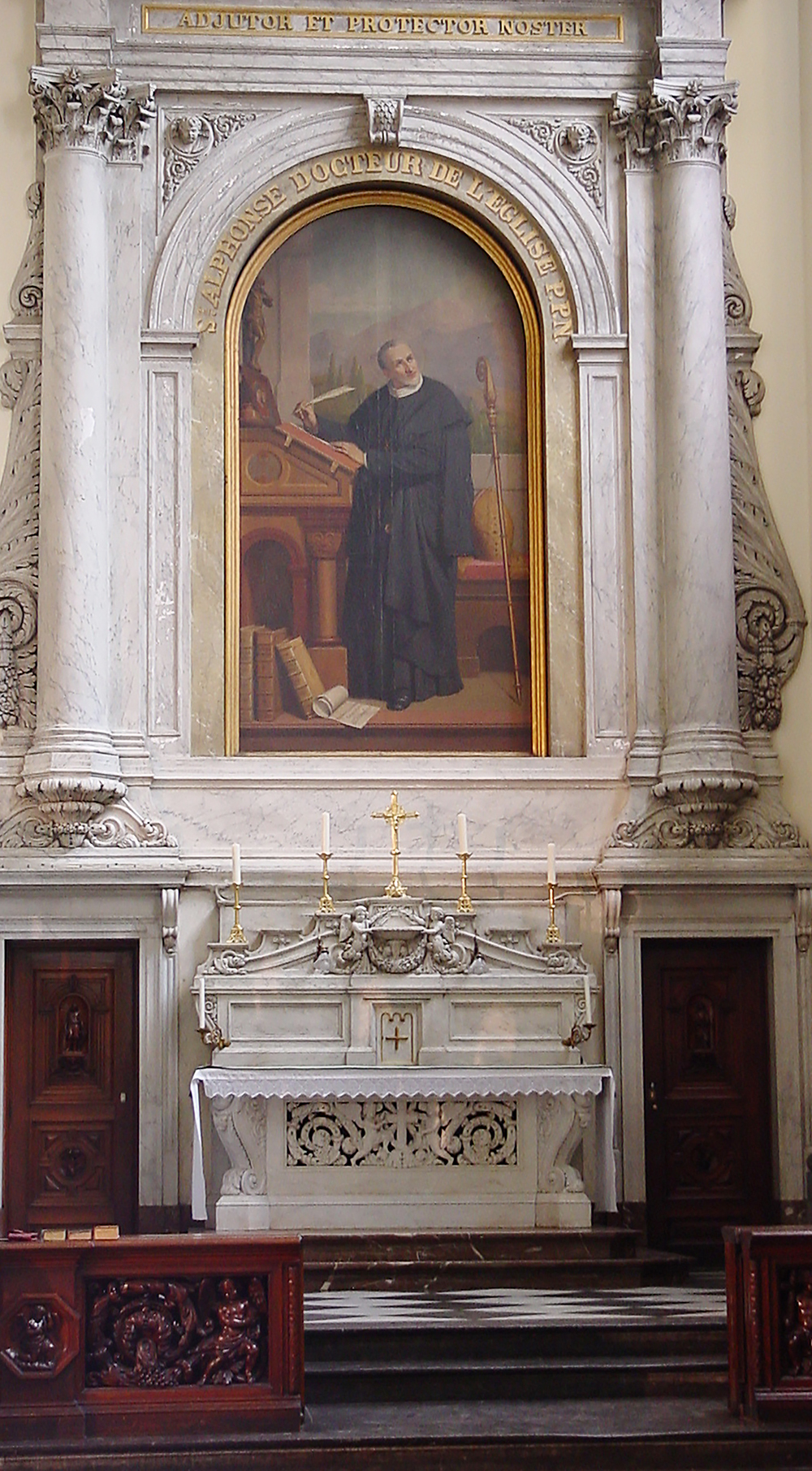 In 1910, Metropolitan Andrey Sheptytsky, the head of the UGCC, invited the Redemptorists to bring their missionary zeal to western Ukraine (then known as Galicia). In the years that followed, Redemptorist missionaries established several houses, monasteries, and eventually a small seminary. Much of this activity took place in the shadow of the Russian Empire (and eventually the Soviet Union), which regarded the UGCC as an outlaw church that should, by right, belong to the Russian Orthodox Church. Unfazed by external ecclesiastical and political pressure, the Redemptorists continued their work among both the native Catholic faithful and Russian Orthodox Christians.

Under the guidance of Bishop Mykolay (Nicholas) Charnetsky, who was himself a Redemptorist, the Redemptorists and other Greek Catholic clergy began reaching out to the Russian Orthodox in the hopes of bringing them back into the Catholic fold. Knowing that this lofty goal would only be possible if he met Orthodox Christians eye-to-eye, Bishop Charnetsky encouraged these missionaries to embrace the Slavo-Byzantine patrimony in its fullness, without intermingling or subverting it to the Latin Catholic heritage. In this way, Bishop Charnetsky and those who sought out the estranged Russian Orthodox kept faith with Pope St. Pius X’s admonition to the fledgling Russian Greek Catholic Church that it not forge a hybrid Latin/Byzantine Rite.

Redemptorist Spirituality and the East

Although Bishop Charnetsky and other Redemptorists encouraged Greek Catholics to hold fast to what they had received from their forebears, it was next to impossible for the Congregation to not leave an impress of its native Latin heritage on the Ukrainian Church. Certain practices which had historically been uncommon among Byzantine Christians, such as mental prayer and spiritual retreats/missions, became more widespread after the Redemptorist missionaries arrived. Other historically Latin spiritual devotions, such as the Rosary and Stations of the Cross, had come to Greek Catholics from their Roman Rite Polish neighbors long before the Redemptorists arrived.

It is tempting for some contemporary Eastern Catholics to decry these “Latinizations,” but doing so ignores the number of ways Redemptorist spiritual traditions dovetailed naturally with Byzantine ones. For instance, the Redemptorist’s heavy emphasis on The Crib, that is, the Nativity of Christ is congenial with special emphasis that great event is given in the Byzantine Rite. It is one of the three Byzantine feasts, along with Theophany (Epiphany) and Pascha (Easter), which incorporates a special Vesperal (Evening) Divine Liturgy of Old Testament readings as a forerunner to the main vestal liturgy. Similarly, each of these feast days include a unique service known as the Royal Hours (Prime through None in one service) with particular Psalm and Gospel readings geared toward the feast.

The Cross is never far from the mind of Greek Catholics. The Ochtoechos (Book of Eight Tones), which includes the daily hymns for the liturgical year, dedicates every Wednesday and Friday to the Cross of Christ. And the altar where bread and wine become the Body and Blood of Christ holds a special place in the Eastern soul, a soul that is uniquely shaped by the Divine Liturgy in all of its mystery and grandeur.

Our Lady and the East

The final pillar of Redemptorist spirituality is Mary, whose icon of Our Lady of Perpetual Help is deeply revered by the Congregation. The icon, which originated in 15th century Greece, came to Italy not long after, where it moved between several churches before being entrusted to the Redemptorists by Pope Pius IX in 1865. Today, the icon is enshrined in the Church of St. Alphonsus in Rome. From the time the Redemptorists took possession of the blessed image, the Congregation spread devotion to Our Lady of Perpetual Help throughout the world. It is not surprising that Ukrainian Greek Catholics, with their historically deep devotion to icons of the Blessed Virgin, would quickly embrace this devotion as one of their own.

Indeed, the Byzantine Rite is replete with Marian feasts which are considered holy days of obligation. In addition to the Feast of the Annunciation, which Latin Catholics hold in high regard, Greek Catholics consider the feasts of Our Lady’s Nativity and Entrance Into the Temple as among the 12 great feasts of the liturgical year. Eastern Slavic Christians in particular also keep Pokrov, also known as the Feast of the Blessed Virgin’s Protection, with special reverence. For these Catholics, who have suffered centuries of persecution from Russian imperial and communist forces, Our Lady’s special protection has given them the strength to keep the Catholic Faith when apostasy would have been the far easier choice.

The special role Redemptorist spirituality, including its missionary zeal, has played in the life and maintenance of the UGCC cannot be understated. Rather than a passing “phase” in the life of Greek Catholicism, the Congregation still maintains a visible presence within the Ukrainian Church, both in its homeland and in the diaspora. When most of the Ukrainian Catholic hierarchy had been murdered or imprisoned by the Soviets in the 1940s, it was the Redemptorist Bishop Charnetsky who kept his church’s apostolic lineage alive, even at the expense of great suffering.

Vasyl (Basil) Velychkovsky, Zenon Kovalyk, and Ivan Ziatik are just a few of the Redemptorists who gave their lives for the Catholic Faith when the combined forces of communism and its puppet version of the Russian Orthodox Church conspired to wipe the UGCC from the face of the earth. By the grace of God they did not succeed. Rather, for half a century, the UGCC became an underground church in Ukraine where the faithful kept to many of the spiritual traditions and practices they inherited from the Redemptorists.

Icon veneration went hand-in-hand with reciting the Rosary. With the threat of imprisonment or death looming, the Ukrainian faithful could come to understand on a deeper level Christ’s suffering here on earth. And through it all, Our Lady of Perpetual Help, with her promise of protection, helped keep the UGCC alive.

In the face of Russian propaganda that the Ukrainian Catholic Church was no more, the UGCC emerged from the catacombs in the early 1990s with a million adherents and a thousand priests still ministering to them. Today, the UGCC is exponentially larger with a rich number of vocations drawn from its native soil. Without the holy work and sacrifices of the Redemptorists and the deep spirituality they brought with them more than a century ago, none of this would be possible.