It was in 1976 that the first ordinations of the seminarians who had completed all their seminary studies at Écône took place. That year, Archbishop Lefebvre established the District of France for the Society. By that time, other seminarians had been ordained before us because they had already completed part of their seminary either in Rome or elsewhere, and finished their studies in Fribourg, Switzerland. This was the case for Frs. Aulagnier, Tissier de Mallerais, Post and also the Frs. Bolduc and Bernard Waltz, who are now deceased, and others…

The academic year of 1975-1976 had been draining for the Archbishop because Rome demanded the official closure of his seminary and, later on, the suspension a divinis was imposed on him by Pope Paul VI on the occasion of the priestly ordinations of June 29, 1976. This is when Archbishop Lefebvre made Fr. Paul Aulagnier responsible for the foundation of the District of France. He thus became the first superior of the first district of the Priestly Society of Saint Pius X. Just after my first Mass celebrated at Besançon on Sunday, September 4 (which was the Sunday following the famous Mass at Lille of Archbishop Lefebvre), I became Fr. Aulagnier’s first District Treasurer.

Fr. Aulagnier organized the District of France from the centrally located Le Pointet, a house bought shortly before the ordinations of June 1976 by the Archbishop. This became our “first” retreat house of the Exercises of St. Ignatius. Fr. Aulagnier loved the countryside and enjoyed watching the cows graze upon the green grass of Le Pointet. He traveled all over France with his tiny “204 Peugeot” car, with Br. Dominique, his usual chauffeur. “Fr. Paul” as the Archbishop called him, visited all of the French mission chapels. At that time, they existed under the title of Associations Law of 1905 [Editor’s note: The law of the separation of Church and State], which means that they were directed by laity who had refused, in a truly Catholic manner, the Novus Ordo Missae of Pope Paul VI.

Fr. Aulagnier took the opportunity to give lectures on our holy Traditional Mass vs. the Novus Ordo. These conferences were quite popular, and turned into illustrated booklets, were made available to people who had issues after Vatican II. Catholic consciences of France and elsewhere had been awakened, especially since the ordinations of 1976, and the Mass of Lille which had been largely commented on by the secular media. The world had not foreseen such publicity over the return to Catholic Tradition advocated by Archbishop Lefebvre.

Thus, the first priests coming out of Écône in 1976 were going to be assigned to various priories: first and foremost, Suresnes, which the Archbishop had bought in 1972 and had turned into a bookstore and library, manned by Fr. Cottard. Suresnes, a suburb of Paris, was to become the District headquarters within a year. Then, there was Lanvallay in Brittany and the Abbey St. Michel in Brenne which was to be used shortly as a retreat house. Two years later, it was given to the SSPX Sisters, who had been founded in Albano, Italy. The Archbishop had bought Albano, with the canonical authorization of the Cardinal of Albano. He wanted to make it a formation house for the first three years of the seminary since Écône was becoming too small for all of the anticipated vocations. Above all, the Archbishop wanted his seminarians to discover Catholic Rome with its majestic basilicas and churches dedicated to the countless emerging martyrs of the Church. Archbishop Lefebvre wanted priests steeped in Roman Catholicism as he himself had been by his years as a seminarian at the French seminary in Rome, Santa Chiara.

Later that year, Fr. Aulagnier came to join me at Suresnes, which became the District House. Farewell cows and calves of Le Pointet. Such was the will of Archbishop Lefebvre, our founder, as Paris was obviously more suited for the District leadership.

With the ordinations of 1978, Providence prepared our apostolate to the youth by establishing truly Catholic schools. Near Châteauroux, in Surins, the Traditional laity founded the school of St. Michel with a director who loved education and Catholic education but, alas, he was not the best financial manager. Consequently, when the school was on the brink of bankruptcy, the laity responsible for the administration of the school turned to Fr. Paul Aulagnier. Their solution was that the Society take over the direction of this boarding school, but, along with it, they would take on the heavy debt! “Fr. Paul” went to see the Archbishop in Écône who listened attentively to him. After having told him that it was possible to resume the administration of this school, he reminded Fr. Paul that this is not our [the Society’s] first goal, since the Society has as its primary goal the formation of priests. Fr. Paul’s main argument was that this school would no doubt be a nursery for vocations and future priests. Yes, but beware, said the Archbishop: “Failure is not allowed”—which sent a shiver down the spine of the priest in the face of the great responsibility of such an undertaking. And it is therefore Fr. Laurençon, ordained in Écône, June 1978, who was appointed by the Archbishop to be the director of our first school under the patronage of St. Michael.

Then, we acquired a second school, “Morning Star,” near Strasbourg, founded by Fr. Rohmer and his religious sister with their parents’ inheritance. Fr. Jacques Laguérie, also ordained in 1978, became the director of this new school.

The first issue of the magazine Fideliter came out of Le Pointet press. It was highly prized by “Fr. Paul” who got it off the press thanks to the tireless efforts of Miss Orsier. The issue was brought to Écône and presented to Archbishop Lefebvre by Fr. Aulagnier. The Archbishop opened it, turned the pages, looked at it from every angle, scrutinized it and ended by encouraging “Fr. Paul” with a grin saying: “I hope it is not a still-born!” Today, we have exceeded 250 issues and Fideliter is thriving. To be honest, the Archbishop had funny ways of encouraging us…

Sr. Anne-Marie Simoulin, the Foundress and Superior of the Dominicans of Fanjeaux, wrote to the Archbishop regarding her foundation of boarding girls which admitted day boys at that time. The boys, however, had become too old for her young sisters to teach them. She had written in February 1981 asking him to take over the boys, but the beginning of the school year was in September. I won’t tell you the troubles that this caused us. But, with the help of Providence and St. Joseph, we were able to find and buy a large wine estate a few miles from Fanjeaux, find an architect, obtain the permit to build a school with boarding facilities, and also find a construction company that could finish the project in the short months that separated us from the beginning of the academic year. So, finally, with St. Joseph’s funds, St. Joseph des Carmes near Carcassonne was started in October.

Thus, in the first years, owing to the inexhaustive mission work of Fr. Aulagnier, we opened the priories of Lanvallay-Dinan, Marseilles, Unieux-St. Etienne, Bordeaux, Lyons, Dijon, Nantes, Croix-Lille. Along with them, we furnished them with primary schools held by our SSPX Sisters or our Oblate sisters. In Belgium bordering France, Sr. Marie Christiane, sister of Archbishop Lefebvre opened the first Carmel at Quievrain. I was involved also in helping her renovate the convent.

There is still much to be told about the beginning of the first SSPX District. Catholic France in the 1970’s enjoyed the support of priests and faithful who had held on strongly to Tradition until then. These aging Catholic priests and faithful friends counted on Archbishop Lefebvre and his work. Setting up this important District brought many joys and encouraging graces, along with its load of sorrows. After all, is this not the norm of things as the Imitation says: “The law of life on this earth is the Cross of Our Lord Jesus Christ.”

I wish to conclude with the beautiful encouragement from the Foundress of the Dakar Carmel. I visited her in August 1984, while I was preparing the future foundation in Gabon, Africa. Speaking of Archbishop Lefebvre who had brought them to Senegal, she said to me with all her religious simplicity, “Oh you know, everything that Archbishop Lefebvre undertakes, succeeds.” He himself responded to this compliment: “This happened thanks to the prayers of the Carmelites.”

This piece was translated from the French original by Associate Editor Miss Jane Carver. 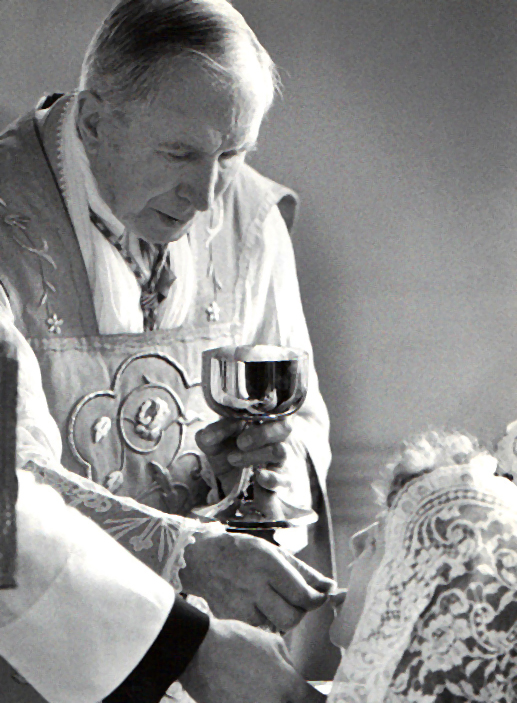