WWII Prisoners of War Built a Catholic Chapel in Wales

During the early days of World War II, some 1,200 Italian soldiers were captured by the Allies in North Africa. In 1943, these men were sent to a prisoner of war camp in a small village located in Wales and housed in relative comfort. After some time, the men asked the officers in charge of the camp if they could create a Catholic chapel in one of the huts in the camp. Given permission, they began work in earnest. The chapel is all that remains of the former camp and is still remarkably well preserved given its age and the crude materials the men had to work with.

One of the prisoners, Mario Ferlito, a self-taught artist, created much of the artwork which adorned the chapel. The men used an emulsion derived from boiled fish bones to bond and preserve the paintings. They used various fruits, vegetables, tobacco and tea leaves to create the various colors they needed for the religious artwork.

This chapel indicates the strong Catholic Faith which flourished in Italy, and indeed most of Europe, in the first half of the 20th century. Sadly, this vibrant Catholic life is now almost completely gone, and is being replaced in many places by Islam. 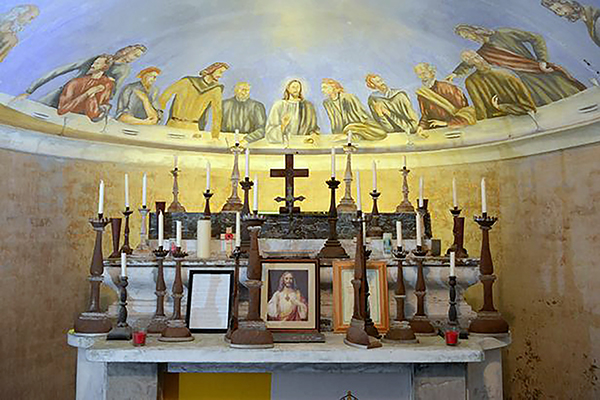