There are 20 missions in California and two ways to examine them: geographically and chronologically. The French are big on chronology therefore we will start with the Mission founded on July 16, 1769, the Mission San Diego de Alcalá. Relatively much is known about the native inhabitants in recent centuries thanks in part to the efforts of Juan Rodriguez Cabrillo who explored the coast in the service of Spain. He documented his observations of life in the coastal villages that he encountered along the southern California coast in October 1542. Cabrillo was the first European to set foot in what is now the state of California and the first to encounter San Diego Bay. The first Franciscan Mission of the Californias, a province of New Spain, is in present day San Diego. On the evening of September 28, 1542, the ships San Salvador and Victoria sailed into the harbor, whereupon Cabrillo christened it “San Miguel.” During that expedition a landing party went ashore and briefly interacted with a small group of natives. Some 60 years later, another Spanish explorer made landfall some 10 miles from the present Mission site. Under his command, the San Diego, Santo Tomas and frigate Tres Reyes dropped anchor on November 10, 1602 and the port was named renamed San Diego. It would be another 167 years before the Spanish returned to San Diego.

Ever since the voyages of Christopher Columbus, the Kingdom of Spain sought to establish missions to convert the pagans to Roman Catholicism in order to save souls and to facilitate colonization of these lands. However, it was not until 1741, the time when the ambitions of Russia became known, that King Philip V felt he needed to do something to save upper California. In 1769, the expedition of Spanish friar Junipero Serra was to establish missions and presidios at San Diego and Monterey, therefore securing Spanish claim to the Pacific Coast harbors recommended earlier and established it in an area inhabited by an obscure Indian tribe. The Mission and the surrounding area were named for the Didacus of Alcalá, a Spaniard more commonly known as San Diego. The Mission was the site of the first Christian cemetery in California. San Diego is also generally regarded as the site of the first public execution in 1778. Fr. Luis Jayme, California’s first Christian martyr, is buried under the chancel floor. The current church, built in the early 19th century, is the fifth to stand on that location. The Mission had five bells. Bells were vitally important to daily life at any Mission. Before people could afford watches and cell phones, the bells were rung at mealtimes to call the Mission residents to work and to religious services; they were rung during births and funerals, to signal the approach of a ship or the return of a missionary, and at other times. The novices were instructed in the intricate rituals associated with ringing the mission bells.

The Mission site is a historical landmark. On August 9, 1834, Governor Figueroa issued his Decree of Confiscation. The missions were offered for sale to citizens who were unable to come up with the price, so all mission﻿ property ﻿were broken up into ranchos and given to ex-military officers who had fought in the War of Independence against Spain. On June 8, 1846, Mission San Diego was given to Santiago Arguello “for services rendered to the government.” After the United States annexed California, the Mission was used by the military from 1846 to 1862.

The Mission Returned to Catholic Hands

President Abraham Lincoln signed a proclamation on May 23, 1862, that restored ownership of the Mission to the Roman Catholic Church, something the Free﻿mason Washington would never had done!

When it was granted back to the Church, the Mission was in ruins. Restoration started in the 1880s, but it ceased in 1907 until 1931. In 1941, the Mission again became a parish church. It is still an active parish serving the Diocese of San Diego. In 1976, Pope Paul VI designated the church as a minor basilica. The parish is partially funded by a gift shop and self-guided tours of the grounds and buildings are available to the public for a small donation.

Mission industries: the goal of the missions was, above all, to be self-﻿sufficient in relatively short order.

Farming, therefore, was the most important industry of any mission. Prior to the establishment of the missions, the native peoples only knew how to utilize bones, seashells, stone, and wood for building, tool making, weapons and so forth. The missionaries discovered that the Indians, who regarded labor as degrading to men, had to be taught industry in order to learn how to be self- supporting. The result was the establishment of a great manual training school that comprised agriculture, the mechanical arts and the raising and care of livestock. Everything consumed and otherwise utilized by the natives was produced at the missions under the supervision of the padres; thus, the neophytes not only supported themselves, but after 1811 , they sustained the entire military and government of California. Wheat, corn, wine grapes, barley, beans, cattle, horses, and sheep were the major crops in San Diego. In 1975, construction on a system of aqueducts was begun to bring water to the fields and the Mission. 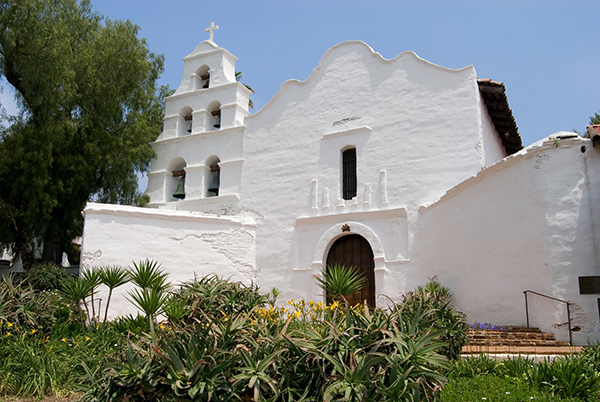 Mission Basilica San Diego de Alcalá was the first Franciscan mission in The Californias, a province of New Spain. Located in present-day San Diego, California, it was founded on July 16, 1769, by Spanish friar Junípero Serra in an area long inhabited by the Kumeyaay people. The mission and the surrounding area were named for the Catholic Didacus of Alcalá, a Spaniard more commonly known as San Diego. The mission was the site of the first Christian burial in Alta California. 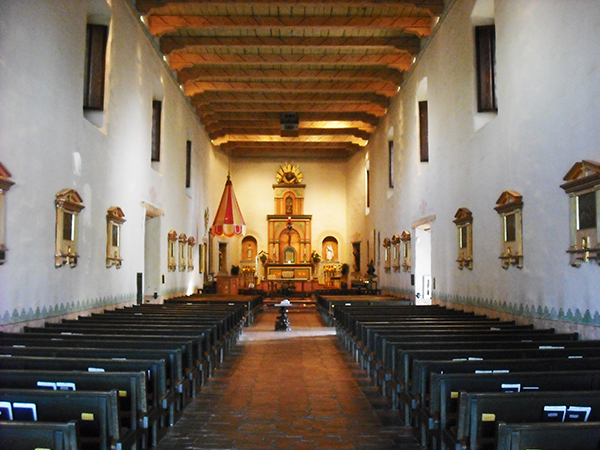 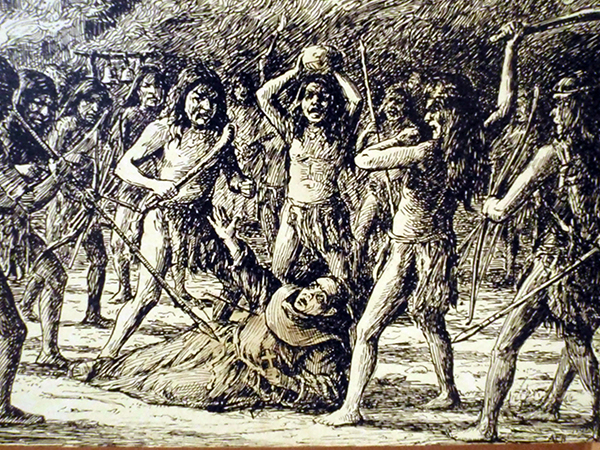 Fr. Luis Jayme during Kumeyaay raid, shortly before his death.