An “icon” is the painted representation of religious events or personages. Today icons are usually associated with Byzantine tradition, although, in fact, they are part of the common heritage of the Universal Church.

Until the 11th-12th centuries, the Church, both East and West, followed a common path in art, not aiming at a naturalistic representation of persons and events, but having recourse to a symbolic language to express, in line and color, the doctrine of the Church.

Hence, these images were considered from the beginning as an effective means of instruction for the faithful. As the 4th ecumenical Council of Constantinople (870) says: “Just as through the written words which are contained in the Book, we all shall obtain salvation, so through the influence that colors in painting exercise on the imagination, all, both wise and simple, obtain benefit from what is before them; for as speech teaches and portrays through syllables, so too does painting by means of colors.”

Perhaps icons will appear alien to our artistic sensibilities, formed in the appreciation of the specifically Catholic styles, the Gothic and the Baroque. Nonetheless, as Christmas approaches, it could be profitable to consider the icon of the Nativity of Our Lord. This icon is a means of formulation of the dogma of the Incarnation. Its doctrinal depth may nourish our meditation, in preparation for a worthy celebration of the feast, and its more abstract style of representation may offer an antidote to the maudlin sentimentality of the religious images that engulfs us in this holy season.

The whole scene represented in the icon rests on the narrative of the Gospels, with references to the Old Testament and to ancient writings, as well as on a long hymn by St. Romanus the Melodist, which is sung in the Christmas liturgy of the Eastern churches: “Today the Virgin gives birth to Him who is above all being, and the earth offers a cave to Him whom no one can approach. Angels with shepherds give glory, and magi journey with a star, for to us there has been born a little Child, God before the ages…”

The Scene of the Mystery

The movement of God’s love and compassion towards His creation is signified by rays of light issuing from a half-circle at the top of the icon. The half-circle in blue represents the Triune God answering the prayer of Isaiah: “O that Thou wouldst rend the heavens and come down” (Is. 64:1). As God’s operations outside Himself are common to the three Persons, He descends in one ray to the star of Bethlehem. From the star, the ray of light divides into three branches, as a sign of the participation of the three Persons in the work of our salvation.

The cave is not mentioned in the Gospels, but by Tradition. It appears in the writings of St. Justin Martyr, and the Bethlehem cave was already highly venerated by pilgrims, even before the building of the Constantinian basilica upon it.

The joy for the birth of the Child is somehow attenuated by the oppressive darkness of the cave—the night of sin. St. Irenaeus of Lyon﻿s sees in this cave a prefiguration of the descent of Christ to hell. Thus, the cave of Bethlehem, the cave under the Cross in the icons of the Crucifixion, and the hell of the icons of the Resurrection, all remind us of the same reality, the valley of the shadow of death (Ps. 23:4), i.e., sin.

In this dark background is the Child laid in the manger. He is illuminated with heavenly light against this darkness: “In Him was life and the life was the light of men. The light shines in the darkness, and the darkness did not comprehend it” (Jn. 1:4-5).

In the icons of the Crucifixion, often human bones are shown in the cave under Calvary; for an ancient tradition related that the Cross was planted upon Adam’s grave. In the icon of the Nativity, the Child occupies the same place as those bones, for He is the New Adam.

There are others allusions to the Passion, thus signifying the relationship between the Incarnation and the Cross. The Child has the proportions of an adult; the swaddling clothes resemble a shroud; the manger is rectangular, resembling a coffin or grave. The newly-born Child is lying in a tomb, for He is born so that by His death, death itself and sin will be overcome.

The ox and the donkey have received different interpretations. Some see in the ox, which is for Jewish law a clean animal, the figure of Israel, while the donkey, unclean for the Jews, would represent the Gentiles. In Leviticus, it is forbidden to yoke together clean and unclean animals, but as Our Lord has come for Jew and Gentile alike, they are here represented together. Still others see in them an application of the words of Isaiah: “The ox knows its owner, and the ass its master’s crib; but Israel does not know, my people do not understand” (Is. 1:3).

In front of the cave, the Virgin Mother of God, the Theotokos, reclines on a magnificent red cushion, embroidered in gold. The dignity of the Mother of God is stressed by her place in the composition, by her size in relation to the other figures, by the color of her mantle, a reminder of the royal purple, and also by the gold embroideries; but most especially by three stars, on her head and shoulders, which signify her perpetual virginity—before, during and after the birth of Christ.

We would expect her to be occupied with the Child, to look at Him, full of joy, or at least making some gesture of adoration. These gestures are avoided, to stress the mystery implied in the scene. Mary turns away from the Child, serene and recollected, looking far away. Thus is signified how for a creature, confronted with the incomprehensible mysteries of the Creator, the only response possible is silence and contemplation: “Mary kept all these things, pondering them in her heart” (Lk. 2:19).

The angels approach, they who are always in the presence of God. The light on their vestments and the gold in their colored wings indicates their spiritual beauty. Sometimes, their hands are veiled, an ancient gesture of adoration. In the manger lies the Lord and Creator, who, in His incomprehensible love, has taken up human nature, so greatly inferior to that of pure spirits. The angels adore Him as “God made Man,” what Lucifer refused to do from the beginning, and thus the adoration of the angels announces the victory over darkness.

Near the cave, with their flocks, the shepherds look up, to the angels that announce to them the birth of the Messiah (Lk. 2:8-18). These simple men, whose poor vestments contrast with the splendor of the angels, are the first witnesses of the Son of God, and it is precisely the simplicity of their hearts that makes them capable of announcing the good news: “And when they saw it they made known the saying which have been told them concerning this child; and all who heard it wondered at what the shepherds told them﻿” (Lk. 2:17-18).

In a corner we see the three Magi, riding their horses, as they arrive to Bethlehem after a long journey. The first one points to the star that has guided them: “When they saw the star they rejoiced exceedingly with great joy” (Mt. 2:10). Their emotion is shown by their gestures, the mantles floating in the air, the vigorous movement of the horses.

From the very first centuries, these men coming from the Orient (Mt. 2:1) were represented as natives of Persia, with a Phrygian cap, ornate mantles and narrow trousers. Thus is signified that all nations are called to adore the true God who is born among us as a small Child. Another detail points out the universal import of this scene of the Magi: they are of different ages—all men, of whatever nation or age, are called to adore the Son of God.

St. Joseph is in a corner, in a pensive attitude, as if absent from everything that is happening. He is represented aside, to stress that he is not the biological father of the Child.

His attitude expresses, as the Gospel relates, the suffering of not understanding what is happening. It represents the incapacity of any man before the incomprehensible mystery of the Incarnation. He is, and represents, the quiet believer who, in the obscurity of faith, always obeys without delay the most perplexing calls of God.

Facing St. Joseph there is an enigmatic man, who looks like an old shepherd, resting on his staff, seemingly in dialogue with St. Joseph. Customary interpretations see this man as the devil, a tempter, although in Byzantine iconography the devil is seldom represented, and if so, always as defeated. In the end, we do not know exactly who this man is, but his presence stresses the solitude on St. Joseph in his doubts.

Some ancient traditions refer that two women were present as midwives at the birth of Our Lord. Although their ministrations were unnecessary, because His birth was supernatural, with no pain to His Mother, their presence washing the Child stresses the reality of the Incarnation. It shows that the Eternal God has fully assumed the reality of human nature, because, as a newly born infant, He needed the help of others for even the smallest details of life, and voluntarily agreed to follow a human custom, as He will later accept the circumcision and baptism, which He did not need.

The Whole of Creation Represented

The cave is in a mountain—ochre-colored, suffused with light. All the scenes and people are represented against this background. Thus, the mountain indicates that all these scenes, different in place and chronological order, constitute only one reality, that of God—a presence of the eternity of God.

There is a multitude of figures against the background of the mountain. Celestial beings enter into this earthly realm—men participate in the events, each one in his role—the animal world is represented by the flocks, sheep and goats; the vegetal world by the trees and fruits. Finally, the earth, which we consider as inert, elevates itself as a mountain, exulting, dancing and irradiating light, as it participates in the advent of the “Sun of Justice.” 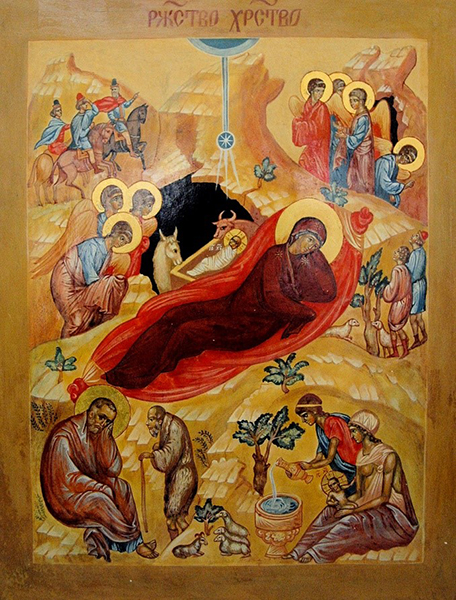